In May 1690, during the Nine Years' War (1688–97), a large number of Irish soldiers arrived in France with their dethroned King James II. On June 18, of the same year Louis XIV formed three regiments with them. The present regiment was immediately employed for the conquest of Savoy under M. de Sainte-Ruth, and distinguished itself in a combat fought between Conflans and Moustiers. In 1691, it was transferred to Roussillon where it participated in the siege of Urgell, in the capture of Valencia and Boy and in the relief of Pratz de Mollo. In 1692, the regiment was increased to three battalions and started the campaign in the Pyrenees before being transferred to Germany where it was brigaded with Picardie Infanterie. The same year, it took part in the capture of Heidelberg, Wingemberg, Oppenheim and Darmstadt. In 1694, the regiment became the property of André de Lee. In 1696, it served on the Meuse and in 1697, in Flanders where it took part in the siege of Ath.

In 1698, the regiment was reduced to two battalions.

In 1701, at the outbreak of the War of the Spanish Succession (1701-13), the regiment was sent to Flanders; one of its battalion was stationed in Upper Guelderland. In 1702, the regiment was sent to Germany. In 1703, it took part in the siege of Kehl, in the attack on the Lines of Stolhofen, in the attack against the entrenchments of Hornberg, in the Combat of Munderkingen, in the Battle of Höchstädt and in the capture of Kempten, Ulm and Augsburg; in 1704, in the disastrous Battle of Blenheim; in 1705, in the relief of Fort-Louis and in the capture of Drusenheim, Lauterbourg and the Marquisat Island; and in 1707, in Villars’ expeditions in Swabia and Franconia. In 1708, the regiment was transferred from the Rhine to Flanders. In 1709, it took part in the Battle of Malplaquet; in 1711, in the attack on Arleux; in 1712, in the victorious Battle of Denain and in the sieges and recapture of Douai, Le Quesnoy and Bouchain; in 1713, in the sieges of Landau and Freiburg; and in 1714, in the siege and capture of Barcelona. The remnants of the regiment were then assembled in a single battalion.

In 1733, at the outbreak of the War of the Polish Succession (1733-35), the regiment served at the siege of Kehl. It spent the winter in Strasbourg. In 1734, it took part in the attack on the Lines of Ettlingen and in the siege of Philisbourg before taking up its winter-quarters in Flanders. In 1735, it campaigned on the Moselle and took part in the Battle of Klausen. It then remained at the camp of Saint-Maximin with the other Irish regiments.

On the eve of the Seven Years’ War, the regiment counted only 1 battalion.

When the French infantry was reorganised in 1762, the regiment incorporated the disbanded Royal Écossais Infanterie on December 21.

During the Seven Years' War, the regiment ranked 92nd and was under the command of:

By August 1 1757, the regiment was assuming garrison duty in the citadel and fort of Calais. It continued to serve on the coasts until 1760.

In 1760, the regiment was sent to Germany under the Chevalier de Jerningham. By May 23, it was part of the first line of the infantry centre of Broglie's Army. By December 30, the regiment had taken its winter-quarters in Marburg.

On February 14, 1761, the regiment distinguished itself in the defence of Marburg, driving back the Allies three times, killing their chief, General Breidenbach, and seven other officers, and capturing three cannon. On July 16, the regiment took part in the Battle of Vellinghausen where the Irish Brigade stormed the village and the redoubt of Schedingen.

In 1762, the regiment took part in the attack on the Castle of Sabbaburg. On December 21, it incorporated the disbanded Royal Écossais Infanterie.

In 1763, the regiment was placed in garrison at Bouchain. 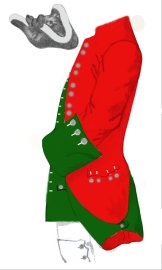 N.B.: the uniform seems to have changed in 1762 during the general reorganisation. The coat was still red but with white lining, green distinctive and a green shoulder strap. The waistcoat was now red.

Ordonnance colours: red and green opposed cantons; centre device consisting of a golden Irish harp surmounted by a golden crown with the motto In Hoc Signo Vinces; 1 gold crown in each canton.