The regiment was raised in 1688, during the Nine Years’ War (1688-1697), by Colonel Euno Josua Baron von Bülow. It initially consisted of six companies. In 1689, it served on the Rhine. In 1690, it was sent to the Netherlands. In 1691 and 1692, it remained in Hanover. In 1692, it contributed two companies to the creation of a new regiment which was sent to Hungary. After their return from Hungary these two companies were reintegrated into their former regiment. In 1693, the regiment was sent to Brabant where it took part in the Battle of Landen. In later took part in the sieges of Huy and Namur.

During the Seven Years' War the successive Inhabers of the regiment were:

On July 26, 1757, during the French invasion of Hanover, the regiment took part in the Battle of Hastenbeck where it fought in the second line of the right wing under the command of Dachenhausen.

In June 1759, the regiment was part of the Allied main army under the command of Duke Ferdinand of Brunswick. On July 27 in the afternoon, the Hereditary Prince set off from Petershagen, near Minden, with 6 bns and 8 dragoon sqns (including this regiment), totalling some 6,000 men, and marched south-westwards towards Lübbecke to threaten the French left flank and the supply line between Minden and Paderborn. On August 1, the regiment was part of the left wing of the corps of the Hereditary Prince who attacked and defeated Brissac's French corps in the engagement of Gohfeld. At the end of the year, the regiment was sent to the siege of Münster.

On July 10 1760, the regiment was part of Lieutenant-General Waldegrave's Reserve at the Combat of Corbach. This reserve did not take part in the engagement.

Early in 1761, the regiment took part in the Allied winter offensive in Hesse. On February 18, it was part of Oheimb’s Corps who attacked Maupéou's Corps near Sachsenberg. Maupéou was captured along with a lieutenant-colonel, 5 officers and 50 soldiers. On July 16 1761, the regiment was present at the Battle of Vellinghausen where it formed part of the cavalry right wing under the Hereditary Prince of Brunswick. On August 29, the regiment, along with three grenadier battalions, was detached to to Dorsten under General von Huth. On August 30, this detachment stormed Dorsten, destroying the bakery of Soubise’s Army, taking 40 officers and 600 privates prisoners, and capturing 6 cannon and 2 colours.

In 1762, the regiment once more took part in a campaign in Western Germany, By May 23, it was attached to the Corps of the Hereditary Prince operating in Westphalia. On August 30, it fought in the Combat of Nauheim where it was initially part of Lieutenant-General Oheimb's column before being sent as reinforcements to Luckner. The regiment suffered heavily in this battle, losing Captain Hofmeister, Captain-Lieutenant Becker, Lieutenant Schöning and Ensign Urhof killed; and Major von Bothe, Captain von Ziegesar, Lieutenants von Freytag, Duve and Blocker and Ensign Guhl wounded. Furthermore, it lost more than 200 NCOs and private killed or wounded. Colonel von Müller had his horse killed under him and was taken prisoner. On September 21, the regiment took part in the Combat of Amöneburg where it was attached to Zastrow's Corps occupying the ground immediately before the Brücker Mühle.

Uniform in 1759 -
Source: Richard Couture as per a template by Hannoverdidi

Musicians were dressed in reverse colours and probably wore shoulder laces. The staff kettle-drummer probably carried NCO distinctives. His kettle-drums were made of copper and had a blue apron fringed gold carrying a device consisting of the Springing White Horse on a red ground surmounted by an Electoral crown; the motto “NEC ASPERA TERRENT” underneath

As dragoons, musicians were drummers. The likely drum pattern would have been similar to the foot with hoops in alternating facing colour and red diagonal stripes, white drum cords over a brass drum with the Arms of Hanover in the centre. 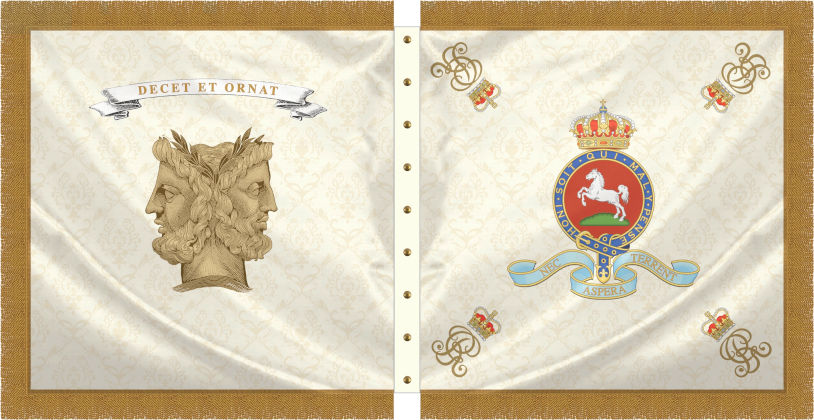 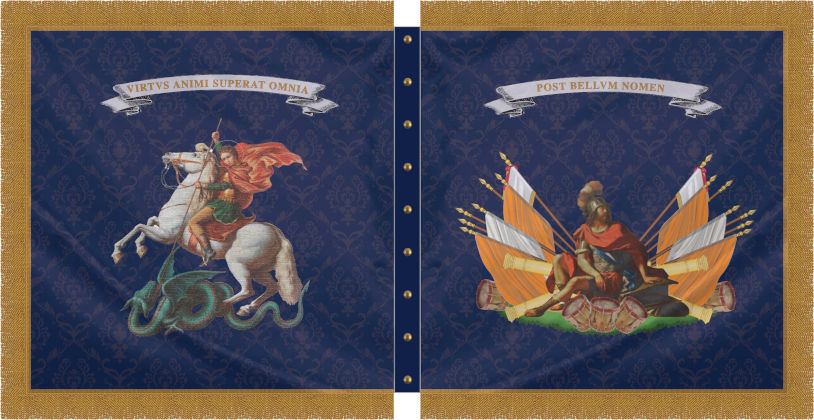 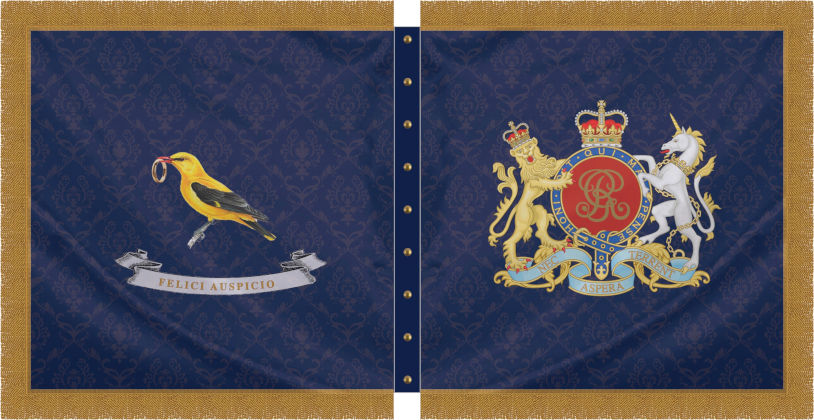 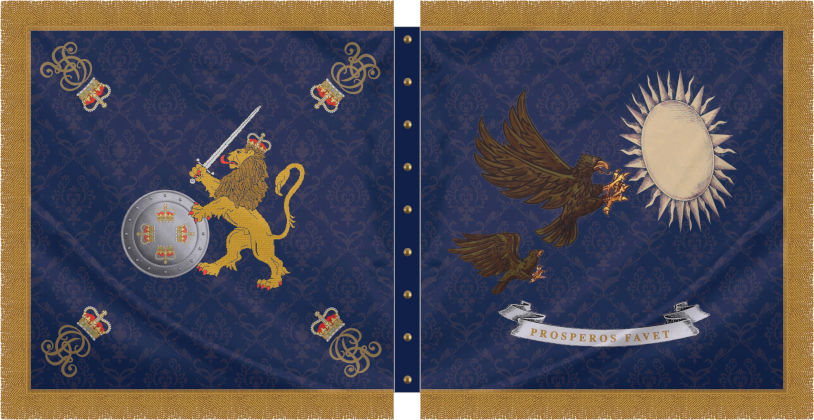