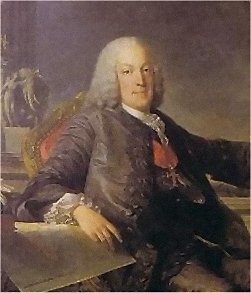 Detail of a painting of Pombal by Van Loo

Carvalho studied law at Coimbra University and served for a short time as a private in the army. Afterwards, he lived the life of a man about town in Lisbon, sharing in the diversions of the "Mohocks" who then infested the streets.

In 1733, Carvalho abducted and married Theresa de Noronha, a widow belonging to one of the most distinguished families in Portugal. He then retired to Soure, where, on the recommendation of Cardinal de Motta, King John V commissioned him to write a series of biographical studies.

In 1738, Carvalho was appointed as Portuguese ambassador to London

On January 7 1739, Carvalho's first wife died. He continued to assume his charge of ambassador to Great Britain until 1745.

In 1745, Carvalho was transferred to Vienna. On December 18, he married Leonora Ernestine Daun, daughter of General Count Daun.

In 1749, Carvalho was recalled to take up the post of secretary of state for foreign affairs and war.

On August 3 1750, King José I ratified the appointment of Carvalho as secretary of state for foreign affairs and war.

From 1750 to 1777, Carvalho's career is part of the history of Portugal. During these years, he was able to reorganize Portuguese education, finance, the army and the navy. He also built up new industries, promoted the development of Brazil and Macao and expelled the Jesuits.

In 1755, after the terrible earthquake that hit Lisbon on November 1, Carvalho gained complete ascendancy over the mind of King José I because of his energetic role during the ensuing crisis. He was then promoted prime-minister.

In June 1759, Carvlaho suppressed the so-called "Tavora plot". This action gained for him the title of Count of Oeiras.

In February 1762, it was obvious that Carvalho's administration of military affairs had left the Portuguese Army totally unprepared for the war against Spain. The army staff was insufficient to place the troops on war footing without British material assistance.

In September 1770, Carvalho was made Marquess of Pombal.

In 1777, soon after the death of King José I, Carvalho was dismissed from office.

In January 1781, Carvalho's bitterest opponent, the Queen-Mother Mariana Victoria died, saving him from impeachment. However, on August 16, a royal decree forbade him to reside within 80 km of the court.

This article incorporate texts from the article "Pombal Marquess of" of the Encyclopædia Britannica (11th ed. London: Cambridge University Press, 1911), a publication now in the public domain.