The regiment was raised in 1702 for the Prince Adolph von Mecklenburg-Strelitz. It garrisoned at Harburg.

In 1716, when Tsar Peter the Great operated in Zealand, the King of Denmark repeatedly asked him to retire. Finally most Russian troops retired towards Greater Poland while the rest landed at Stralsund and took up their winter-quarters in Mecklenburg. Duke Karl Leopold of Mecklenburg had since many years disputes with the nobility of his duchy. He seized this opportunity presented by this Russian contingent to pressure the nobility. The tsar invoked the fact that the duchess was his brother's daughter to assist Karl Leopold and refused to evacuate the duchy until Karl Leopold had obtained the submission of the nobility. During this period, the nobility and subjects were burdened with such unbearable conditions that only many of them fled. The Duke of Strelitz and his whole court even left for Ratzeburg. The tsar occupied Strelitz and seized Travemünde, clearly revealing his intention to occupy the Duchy of Mecklenburg. These event finally draw the attention of the King of Great Britain and of the Holy Roman Empire. The nobility of Mecklenburg renewed its complaints to the Imperial Diet about the abuse that they suffered. Finally, in 1719, the Holy Roman Empire sent a force of 12 battalions (including the present regiment) to Mecklenburg. This force met the Russian and Mecklenburger army at Wallsmühlen.

In 1733, the regiment was part of a force of ten battalions who quenched a revolt in Mecklenburg.

In 1738, part of the regiment marched against the Danes and drove them out of Steinhorst.

In 1742, during the War of the Austrian Succession (1740-48), the regiment joined the Austrian army operating in Flanders. In 1743, the regiment was attached to the Reserve Corps encamped near Hanau. In 1744 and 1745, it served on the Rhine before returning to Hanover. In 1747, it was sent to Brabant where it took part in the Battle of Lauffeld.

Since the creation of the regiment its successive inhabers were:

In March 1758, during the Allied winter offensive in western Germany, the regiment took part in the siege and capture of Minden. On May 26, the regiment was with the Allied Main Army under Ferdinand of Brunswick in the camp of Nottuln. On May 31, it accompanied Ferdinand in his offensive on the west bank of the Rhine. On June 23, the regiment took part in the Battle of Krefeld where it was deployed on the right wing under the command of the Erbprinz (Hereditary Prince) of Brunswick. At 1:00 p.m., the regiment followed the Hereditary Prince in his attack against the wood held by Saint-Germain Division. Towards the end of the battle, the Hereditary Prince and Gilsa rallied the battalion along with other Allied infantry units and advanced onto the plain. The Comte de Gisors at the head of 4 squadrons of Carabiniers charged these advancing battalions who let them close in to about 20 paces before firing a devastating volley mowing down in an instant most of the first rank. A single squadron managed to break through but the third rank of infantry knocked it down. In this battle, the regiment lost more than 200 men killed (including Captain-Lieutenant Wilding and Lieutenant von Scheiter) or wounded (including Lieutenant von Goeben). Soon afterwards, despite these heavy losses, the regiment managed to capture a French detachment near Roermond.

On July 10 1760, the regiment was part of a column under Lieutenant-General von Oheimb sent by Ferdinand of Brunswick to support the Hereditary Prince engaged in a Combat near Corbach. Oheimb's column arrived too late to take part in the action, reaching Meineringhausen only at 9:00 a.m. On September 19, the regiment, under General Wangenheim, took part in the affair of Löwenhagen.

On February 15 1761, the regiment was attached to General von Spörcken's Corps who took part in the surprise attack on Langensalza. It then took part in the unsuccessful siege of Kassel. On July 16, the regiment was present at the Battle of Vellinghausen where it formed part of Wolff's Corps detached by Spörcken from Herzfeld to reinforce Wutginau. 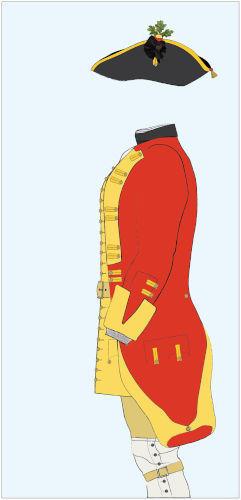 Note: Wissel mentions that in 1761, the lining of the coat and the waistcoat changed from yellow to straw.

Regimental Colour: yellow field; within a palm wreath a ship at sea is backed by cliffs and stars above; blue scroll above reads IN DEO CONSERVATIO MEA. Hereafter, we present an illustration from the Reitzenstein Sammlung, dating from circa 1761 (left) and the interpretation of Hannoverdidi (right).