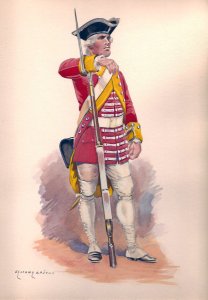 In May 1690, during the Nine Years' War (1688–97), a large number of Irish soldiers arrived in France with their dethroned King James II. On 18 June of the same year Louis XIV formed three regiments with them. The present regiment was immediately employed for the conquest of Savoy under M. de Sainte-Ruth, and distinguished itself in a combat fought in a pass of Savoy. The same year, it took part in the siege of Montmélian. In 1691, it was stationed at Pinerolo. In 1693, it took part in the Battle of Marsaglia In 1697, it was transferred to the Meuse. in Flanders where it took part in the siege of Ath.

In 1698, the regiment was reduced to one battalion.

In 1719, during the War of the Quadruple Alliance (1718-20), the regiment formed part of the Army of the Pyrenees and was at the sieges of Fuenterrabía, San Sebastian and Urgell, and at the blockade of Roses.

When the French infantry was reorganised in 1762, the regiment incorporated the disbanded Ogilvy Infanterie on December 21.

During the Seven Years' War, the regiment ranked 93rd and was under the command of:

During the first years of the war, the regiment served on the coasts of Normandy and usually had its quarters at Valognes.

By August 1, 1757, the regiment was stationed at Cherbourg in Lower Normandy.

At the beginning of August 1758, the regiment formed part of the French force defending Cherbourg during the second British expedition against the French Coasts. It garrisoned the town with Horion Infanterie.

In 1761, the regiment contributed to the defence of Marburg. On July 16, it took part in the Battle of Vellinghausen.

In 1762, the regiment was at the camp of Dunkerque. On December 21, it incorporated the remnants of the disbanded Ogilvy Infanterie.

In 1763, the regiment was initially placed in garrison in Valenciennes. In May, it was transferred to Gravelines. 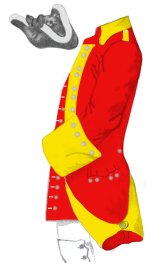 N.B.: the uniform seems to have changed in 1762 during the general reorganisation. The coat was still red but lined white and with yellow lapels and a yellow shoulder strap.

Ordonnance colours: red and yellow opposed cantons with a red cross bordered white; centre device consisting of a golden Irish harp surmounted by a golden crown with the motto In Hoc Signo Vinces; 1 gold crown in each canton.