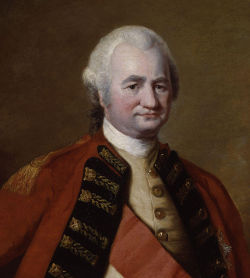 Detail of a painting of Robert Clive by Nathaniel Dance - Source: Wikimedia Commons

Robert Clive was born in 1725 at Styche, the family estate, in Shropshire. His father was a lawyer and represented Montgomeryshire in parliament for many years. His mother was a daughter of Nathaniel Gaskell of Manchester. Robert was their eldest son, they also had five daughters and another son.

Young Clive was a difficult pupil and the despair of his teachers.

In 1743 or 1744, Clive was sent out to Madras (present-day Chennai) as a "writer" in the civil service of the East India Company. On her way to India, his ship was detained for 9 months in Brazil. Clive seized this opportunity to learn the Portuguese language. His first two years in India made him homesick and he was often subject to fits of depression.

In 1746, Madras capitulated to Labourdonnais. However, the breach of that capitulation by Dupleix, then at the head of the French settlements in India, led Clive to escape from Madras and to take refuge at Fort St. David, some 32 km south. There, Clive obtained a commission of ensign. However, in 1748, the Peace of Aix-la-Chapelle forced him to return to his civil duties.

In 1751, before returning home on leave, Major Lawrence appointed Clive commissary for the supply of the troops with provisions, with the rank of captain. Chanda Sahib, the Nawab of the Carnatic, had left Arcot, his capital, to reduce Trichinopoly (present-day Tiruchirapalli), then held by a weak British battalion. Clive with only 200 Europeans and 300 Sepoys attacked Arcot and seized its citadel in order to force Chanda Sahib to raise the Siege of Trichinopoly. Chanda Sahib sent a large army under his son Raja Sahib and his French supporters, who entered Arcot and closely besieged Clive in the citadel. The small British garrison had been greatly reduced by casualties. It now consisted of 120 Europeans and 200 Sepoys. The siege lasted 50 days. Meanwhile, an attempt made by the Governor of Madras to relieve the place failed. However, a body of 3,000 Mahrattas hired to assist Muhammad Ali, a pretender to the throne of Arcot supported by the British, advanced against Arcot. Seeing this, Raja Sahib vainly attempted to storm the fort and finally raised the siege. Clive was then reinforced and followed up his advantage. Meanwhile, Major Lawrence had returned from leave and carried the war to a successful issue. In Great Britain, the court of directors voted Clive a sword worth £700.

In 1754, a treaty was signed between France and Great Britain, in which the British protégé Muhammad Ali was virtually recognized as nawab.

In 1756, Clive returned to India as Governor of Fort St. David with the commission of lieutenant-colonel in the British Army. On his way, he took Bombay (present-day Mumbai) and participated in the 1756 - British operation on the Malabar Coast|capture of Gheria]] (present-day Vijaydurg), a stronghold of the Mahrattas. Clive assumed command at Fort St. David on June 20, the day on which the Nawab of Bengal Siraj Ud Daulah succeeded in the capture of Calcutta (present-day Kolkata). He was immediately sent to the relief of Calcutta along with Admiral Watson. Clive disembarked his troops some km below Calcutta, marched through the jungles and invested Fort William. He captured this fort on January 2 1757. However on February 4, he was defeated by the Bengali relief army in the Combat of Calcutta and forced to retire within the walls. After a few days, despite his marginal victory, the nawab was forced to come to terms with Clive because he had to leave to face an invasion from Afghanistan. Therefore, on February 9, a treaty was concluded between the British and the nawab. It was agreed that all British property taken at Calcutta would be restored and that the British would recover all privileges formerly granted to them. On February 11, the treaty was expanded into an offensive and defensive alliance.

In March 1757, Clive led the land force in the expedition against Chandernagore (present-day Chandannagar, a French counter. He sent the fleet upriver against the place while he besieged it by land. The capture of this French settlement on March 23 gave the combined forces prize to the value of £130,000. When the Nawab of Bengal realized that Clive had ignored his instructions and attacked Chandernagore, he decided to break the treaty that he had signed with the British. He made overtures to Bussy and to the Mahrattas. Clive, not sure of the reaction of the nawab, decided to keep his entire force in Bengal. Meanwhile, overtures were made to the authorities at Calcutta by a group of conspirators led by Mir Jafar, the commander-in-chief of the Nawab's army. Associating with himself Admiral Watson, Governor Drake and Mr Watts, Clive made a treaty in which it was agreed to give the office of viceroy of Bengal, Behar and Orissa to Jafar, who was to pay £ 1,000,000 to the Company for its losses in Calcutta and the cost of its troops, £ 500,000 to the British inhabitants of Calcutta, £ 200,000 to the native inhabitants, and £70,000 to its Armenian merchants. It became necessary to employ the richest Bengali trader, Omichund, as an agent between Jafar Ali and the British officials.

On June 13 1757, Clive started his famous campaign in Bengal. He left Chandernagore with his force consisting of 900 Europeans, 200 half-bred Portuguese, 2,100 Sepoys, and 10 guns. He marched upstream of the Hooghly River towards Murshidabad, the capital of the Mogul Nawab of Bengal. On June 21, Clive arrived on the bank opposite Plassey (present-day Pâlāshi), a village 20 km from Murshidabad. On June 23, 50,000 Bengalis and allies attacked Clive's 2,800 men in their defensive position in the Battle of Plassey, several Bengali leaders betrayed their Nawab Siraj ud-Daulah and rallied to Mir Jafar during the battle and the British won the day. For this victory, Clive was given a peerage as Baron Clive of Plassey. On June 24, Mir Jafar was saluted by Clive as Nawab of Bengal, Orissa, and Bihar. Clive then hastened with his troops to Murshidabad, reaching the city on the same evening. Siraj ud-Daulah had fled before his arrival, but parties were sent out at once in search of him, and a few days later he was brought back and assassinated. On June 29, Clive entered the city and formally installed Mir Jafar on the throne. He then spent the succeeding months in dividing the spoils of the victory, of which the troops received no small share. Clive also took care that the East India Company should be the true sovereign and Mir Jafar its puppet. He appointed Warren Hastings, a 25 years old young man, as his agent to reside at the Court of Mir Jafar. With all these endeavors, Clive was able to return to Calcutta only in May 1758. Nevertheless, he left most of his force at Cossimbazar to keep watch over Murshidabad.

Clive sent Major Coote in pursuit of the French almost as far as Benares. He despatched Colonel Forde to Vizagapatam (present-day Visakhapatnam) and the northern districts of Madras, where on December 9, that officer gained the Battle of Condore.

In 1759, Shah Alam quarrelled with his father the Moghul Emperor Alamgir II. Shah Alam united with the Nawabs of of Oudh and Allahabad for the conquest of Bengal. He advanced as far as Patna, which he besieged with 40,000 men. Mir Jafar, in terror, sent his son to its relief and implored the aid of Clive. Major Caillaud defeated the Prince's Army and dispersed it.

In 1760, after reorganizing the Sepoys units and refortifying Calcutta, Clive returned to England because of health problems. He had accumulated a fortune of at least £300,000 and the quit-rent of £27,000 a year. He remained in England for three years. He set himself to reform the home system of the East India Company.

The Treaty of Paris in 1763 formally confirmed Muhammad Ali in the position of Nawab of the Carnatic, won for him by Clive.

In 1764, things were not going well in India and the court of proprietors of the East India Company hurried out Lord Clive to Bengal with the double powers of governor and commander-in-chief. Jafar Ali Khan had died and had been succeeded by his son-in-law, Mir Kasim. The latter induced not only the Nawab of Oudh, but the Emperor of Delhi himself, to invade Bihar. Major Munro suppressed the first mutiny in the Bengal Army and then scattered the united armies on the hardfought Battle of Buxar in October. The Emperor, Shah Alam II, detached himself from the league, while Nawab of Oudh threw himself on the mercy of the British.

On May 3 1765, Clive landed at Calcutta. He consolidated rich Bengal, making it a base from which the future British India could afterwards steadily and proportionally grow. Hence he returned to the Nawab of Oudh all his territory save the Provinces of Allahabad and Kora, which he made over to the weak emperor. But from that emperor he secured the most important document in the whole of British history in India up to that time. This document from Shah Alam II, signed at Benares on August 12, granted the ministries of Bengal, Bihar and Orissa to the Company. By this deed the Company became the real sovereign rulers of 30 millions of people, yielding a revenue of four millions sterling. Clive also obtained a third firman (royal decree) for the highest of all the lieutenancies of the empire, that of the Deccan itself.

Clive then reorganised the civil services. He raised the salaries which had tempted its members to be corrupt, forbade the acceptance of gifts from natives and exacted covenants under which participation in the inland trade was stopped. Not less important were his military reforms. With his usual tact and nerve he put down a mutiny of the British officers at a time when two Mahratta armies were marching on Bengal. He divided the whole army into three brigades, so as to make each a complete force, in itself equal to any single native army that could be brought against it.

Clive left India for the last time in February 1767. In 1769, he acquired the house and gardens at Claremont near Esher.

From 1772, Clive had to defend his actions against his numerous and vocal critics in Great Britain. Cross-examined by a Parliament suspicious of his vast wealth, he claimed to have taken relatively limited advantage of the opportunities presented to him: "By God...I stand astonished at my own moderation".

Despite his vindication, on November 22 1774, Clive committed suicide at his Berkeley Square Home in London by stabbing himself with a pen-knife.

This article incorporates texts from an article from the following books which are now in the public domain: