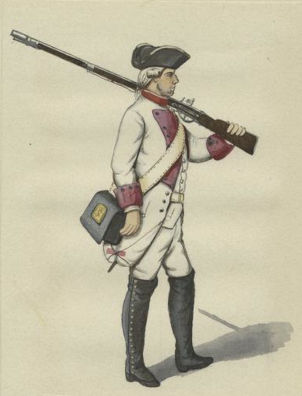 In 1706, during the War of the Spanish Succession (1701-13) after the defeat of the French army at Ramillies, several Belgians faithful to Philippe V of Bourbon emigrated to Spain. However, several other ones chose to enlist in the army raised in the Spanish Netherlands by Charles of Habsburg.

In 1713, the Treaty of Utrecht attributed the southern part of the Spanish Netherlands to Austria. The same year, the regiment was created by the amalgamation of three former regiments:

Its first Chef was the former owner of the third regiment: Prince Claude de Ligne. The regiment served mostly in the Netherlands.

In 1717, Austria sent the so called “Walloon units” (in fact composed of natives of all provinces of the Austrian Netherlands) to fight against the Turks in the Balkans.

The present regiment was formed with the remnants of the regiments Claude de Ligne and Comte de Gand and was officially incorporated in the Austrian forces in the Austrian Netherlands. It was given to Lieutenant-General Prince Claude-Lamoral de Ligne. At his creation the regiment was briefly commanded by Lieutenant-Colonel Amant de Rumigny-Peissant.

Recruitment was made on a voluntary basis and was reserved exclusively to Belgians. Theoretically, enrollment was for life or at least for an unlimited period. However, with the urgent need of manpower during wars, volunteers could enroll for a period of three to nine years.

In 1741, during the War of the Austrian Succession (1740-48), the regiment joined the army assembled on the frontier under the command of the Duke von Arenberg. On June 27, 1743, two battalions and the two grenadier companies of the regiment took part in the Battle of Dettingen. On May 11, 1745, they fought in the Battle of Fontenoy. In May 1748, a detachment of the regiment under Lieutenant-Colonel Hottero took part in the defence of the Castle de La Roche.

The successive colonel-commanders of the regiment were:

Regimental numbers were introduced only in 1769 when this regiment was designated as "I.R. 38".

In 1756, one battalion and the two grenadiers companies of the regiment were ordered to join the main Austrian army assembled in Bohemia. In the spring of 1757, another battalion and a newly raised grenadier company were sent to assist the French army on the Lower Rhine. In the following sections, the feats of arms of these two distinct contingents are followed separately until their reunification.

Battalions serving with the Austrian Army of Bohemia

In December 1756, one battalion and the two grenadier companies of the regiment left the Austrian Netherlands to join the army of Field Marshal Daun in the region of Königsgrätz in Bohemia.

On June 18, 1757, the battalion was in Bohemia with Count Leopold Daun at the Battle of Kolin where it was part of Müffling’s Brigade in the corps of Count Colloredo held in reserve behind the centre. On September 7, when General Nádasdy attacked the isolated Prussian corps of Winterfeldt in the combat of Moys, this same battalion was deployed in the first line of the infantry left division under the command of Lieutenant-General Clerici; while the two grenadier companies were converged with other grenadier companies. These grenadiers, formed in three columns, stormed the Jäckelsberg at the point of the bayonet. Charles-Joseph, Prince de Ligne, a captain in this regiment distinguished himself in this combat. Captain Marquis d’Assche was killed in action. On November 22, this battalion of the regiment took part in the Battle of Breslau where it was part of the Reserve Corps in Baron Wolff's brigade. On December 5 at the Battle of Leuthen, this battalion of the regiment was deployed in the third line of the far right Reserve under Major-General von Luzinsky. In this battle, it lost 170 men killed or wounded, including Lieutenant-Colonel de l’Aman and 9 officers killed.

By the end of 1757, the six Walloon battalions serving in Bohemia had suffered so heavily that their remnants had to be temporarily converged in a single battalion, which took up its winter-quarters near Reichenbach (unidentified location) and Czernilow (present-day Černilov/CZ) in Bohemia.

On January 25, 1758, Empress Maria Theresa issued a decree to levy a large quantity of recruits for her Walloon infantry regiments. By August 2, one battalion of the regiment was part of the reserve of the main Austrian army under the command of Daun near Jarmeritz. Daun was following up the Prussian army retiring through Bohemia after the failure of the Prussian invasion of Moravia. On October 4, this battalion was joined by the battalion which had previously served with the French army on the Lower Rhine. (for the following campaigns, see the section “Reunited regiment”)

Battalion serving with the French Army of the Lower Rhine

In April, 1757, one battalion and a newly raised grenadier company (the 3rd) formed part of a second contingent under Major-General Dombasle sent to join a French army for the planned invasion of Hanover. The four battalions strong Austrian contingent assembled at Roermond. At the beginning of April, the Prince de Soubise ordered the Austrian contingent to move into the Duchy of Cleves and Guelders and occupy them. On April 6, 3 battalions of the Austrian contingent, under Comte Dombasle, entered into Cleves. In June, the battalion of the regiment was in the camp of Bielefeld with the French Lower Rhine Army under Comte d'Estrées. On July 26, this battalion, under Lieutenant-Colonel Baron Maximilien d’Espitael, was at the Battle of Hastenbeck where it was part of the right wing under d'Armentières. After the victory, the battalion encamped at Grosselsen near Hameln with the main body of the French Lower Rhine Army from July 31 to August 2. At the end of the year, the battalion took up its winter quarters in the first line of the French Army at Duderstadt.

On March 11 and 16, 1758, the battalion of the regiment took part in combats near Herstelle at the junction of the Diemel and Weser rivers, managing to hold its positions. In March, it took up its winter-quarters in the vicinity of Kleve. In April, when Clermont redeployed his army along the Rhine, this battalion was stationed in Wesel. At the end of May, it formed part of the contingent under the Baron de Dombasle which had been ordered to join the Austrian army assembled in Bohemia. On its way, this contingent was instructed to join the Reichsarmee which was marching towards Bayreuth and Saxony to fight the Prussians. In September, the contingent took part in the siege of Pirna and in the capture of the Fortress of Sonnenstein. On 4 October, the battalion was finally reunited with the rest of the regiment which was serving under Daun in the main Austrian army. (for the following campaigns, see the section “Reunited regiment”)

On October 4, 1758, after the arrival of the battalion which had previously served with the French, the regiment was then reorganised in 2 battalions of 6 companies each and a grenadier division. On October 14, two battalions of the regiment took part in the Battle of Hochkirch where they were deployed in the vanguard of the leftmost column under O'Donnell, to the west of Steindörfel. It then bitterly fought to keep control of the village of Hochkirch. For his conduct, the Lieutenant-Colonel Prince de Ligne was promoted to colonel (he would remain with the regiment and act as colonel in second). In November, the regiment and its grenadiers took part in the unsuccessful siege of Dresden. On November 9, they took part in a combat against elements of Finck’s Corps in the zoological park. At the end of November, the regiment took up its winter-quarters at Janowitz (present-day Janovice, Rýmařov) in Bohemia where it would remain until June 1759.

By June 1759, the regiment was attached to Daun’s main army which marched to Marklissa in Lusatia. By mid August, it was part of Aynse's Corps. On September 2, it took part in the Combat of Sorau. On October 25, the regiment was detached under the Duke von Arenberg and marched to Dommitzsch. On October 29, Arenberg’s detachment was on the march towards Wittenberg when it was attacked by a Prussian force near Sackwitz. Arenberg, retired to Düben. On November 4, Arenberg’s detachment rejoined the main army at Naundorf. On November 7, 1 battalion of the regiment took part in an engagement near Zehren. On November 20, 2 battalions of the regiment took part in the Battle of Maxen where they were deployed in the second line of the first column of Sincère's Corps under the command of Lieutenant-General Aynse. The regiment and its grenadiers took their their winter-quarters in Gompsen (unidentified location), Seyda and Lungwitz (unidentified location).

In 1761, the regiment served with Daun’s main army in Saxony. It took up its winter-quarters at Coswig, Weinbohla and Gohleis.

For the campaign of 1762, one battalion and the grenadiers were attached to Lacy’s Corps. On the night of August 10 to 11, they took part in a combat, where they lost Lieutenant Saint-Genia. A contingent of the regiment (7 officers and 223 men) under Lieutenant-Colonel Joseph Horger, including the grenadier company of Captain Jean, Comte de Rutant, formed part of the garrison which took part in the defence of Schweidnitz and was forced to surrender as prisoners of war.

In February 1763, the regiment was instructed to return to the Austrian Netherlands.

Uniform in 1762 - Copyright: Frédéric Aubert from a template made by Richard Couture.

N.B.: Bleckwenn reports (Die Regimenter der Kaiserin, in: Schriften des HGM Vol. 3) a statement by the Prince of Prussia in 1762, who had seen a dead officer of the regiment wearing - obviously Hungarian - pink trousers and half boots, a quite unusual attire. (anecdote contributed by Klaus Roider)

Corporals carried a halberd and had silver edgings on their lapels and cuffs.

Until 1760, despite the new regulation of 1755, the musicians probably wore coats of reversed colours with a white shoulder strap on the left shoulder, white swallow nests, white lapels, white cuffs and white turnbacks. From 1760, they wore uniforms identical to those of the privates with light rose swallow nests on the shoulders.