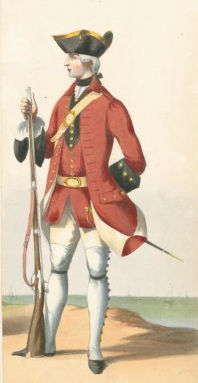 In May 1690, during the Nine Years' War (1688–97), a large number of Irish soldiers arrived in France with their dethroned King James II. On 18 June of the same year Louis XIV formed three regiments with them. In 1691, the new regiment was employed in Roussillon and was at the siege of Urgel. In 1693, it took part in the siege of Roses; in 1694, in the Battle of Torroella and in the capture of Palamos, Girona, Ostalrich and Castelfollit; in 1696, in the recapture of Ostalrich; and in 1697, in the siege of Barcelona.

The regiment counted only 1 battalion.

When the French infantry was reorganised in 1762, the regiment incorporated the disbanded Lally Infanterie on December 21.

During the Seven Years' War, the regiment ranked 94th and was under the command of:

On April 26, 1775, the regiment was incorporated into Bulkeley Infanterie.

By August 1 1757, the regiment was garrisoning Saint-Valérie in Picardie.

By May 23, 1760, the regiment was part of the first line of the infantry centre of Broglie's Army. By December 30, the regiment had taken up its winter-quarters in Marburg.

N.B.: as per Pajol, the regiment was sent to India in 1757 and, on January 15 1761, became prisoners of war and was brought back to France. Pajol might have confused this regiment with Lally Infanterie who did serve in India and was later incorporated into Dillon Infanterie.

On July 16, 1761, the regiment fought in the Battle of Vellinghausen. 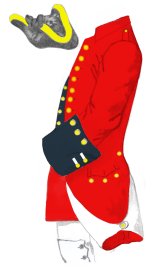 Ordonnance colours: red and black opposed cantons with a red cross bordered white; centre device consisting of a golden Irish harp surmounted by a golden crown with the motto In Hoc Signo Vinces; 1 gold crown in each canton.