By 1549, Cossacks had established four fortified villages on the banks of the Don River.

As early as 1552, Cossacks from the Don River campaigned alongside Russian armies. On that year, they took part in the siege of Kazan. In 1556, they assisted a Russian army in the conquest of the Khanate of Astrakhan.

In 1570, Ivan IV the Terrible sent a charter to the Don Cossacks. This fact is considered as the official establishment of the Don Cossack Host, which remained autonomous from the state government till the early XVIIIth. [2]

From 1582 to 1594, the Don Cossacks were the spearhead of Russia in its conquest and annexation of Siberia.

During the XVIth and XVIIth centuries, Don Cossacks took active part in the wars with Poland-Lithuania.

During the “Time of Troubles”, from 1598 to 1613, Don Cossacks supported different factions but finally accepted the new Romanov dynasty.

In 1637, about 4,500 Don Cossacks (including 1,000 volunteers from the Zaporozhje Cossacks) suddenly captured the Fortress of Azov. The Tsardom government did not officially endorse this action but supported cossacks anyway. In 1638, the Turks unsuccessfully attempted fort the first time to besiege the fortress. In 1641, Azov was besieged again by a Turkish Army of at least 120,000 men. However, the Cossacks repulsed all assaults and the enemy raised the siege. Nevertheless, due to the difficulties with supply cossacks had to abandon the fortress in 1642.

In 1707, Don Cossacks refused to deliver fugitive peasants to the punitive expedition and smashed the government detachment. This started the “Bulavin Uprising” which was brutally suppressed in 1708. Since then, the Don Cossack Host lost its autonomy and all elected leaders were to be confirmed by the government.

On March 14, 1721 the Don Cossack Host was subordinated to the Military Collegium.

During the Seven Years' War, the Don Cossack Host was commanded by:

By the time of the Seven Years' War, the Don Cossack Host counted 15,732 men in 110 administrative sotnias, more precisely :

According to Maslovskiy, the Krasnoshyokov's Brigade (a total of 4,008 men and 8,222 horses) can be considered as a good example of the military organisation of the Don Cossacks:

After joining to the main army, the cossack brigade was to be divided into 8 regiments each of 5 sotnias. The Kalmyk detachment was to be distributed among the regiments. Brigadier Krasnoshyokov personally commanded a regiment. In wartime, each sotnia was commanded by a yesaul.

As per Maslovskiy, the detachment of 400 cossacks allocated to the Observation Corps consisted of: 1 campaign ataman

In 1756 the “Old Command” was stationed in Courland

Already in 1756, 8 regiments, totalling some 4,000 men, were stationed in the Governments of Moscow and Belgorod under Brigadier Krasnoshyokov. They were soon sent to Courland. They were designated as the "Old Command" to distinguish them from the other regiments who joined the army in 1757.

On August 30 1757, during the Russian campaign in East Prussia, 17 regiments of Don Cossacks were present at the battle of Gross-Jägersdorf where they formed part of the Russian vanguard.

In 1758, several regiments of Don Cossacks took part in the invasion of East Prussia. In April, 2,000 Don Cossacks crossed the Vistula. 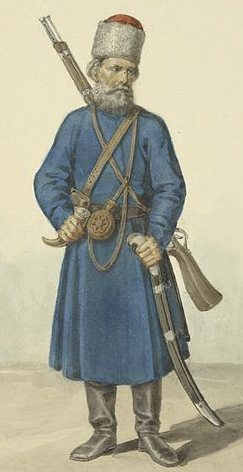 Detail of an illustration depicting a Don Cossack circa 1820

At the outbreak of the Seven Years' War, the Don Cossacks did not wear uniforms. Their clothes were strongly influence by their oriental neighbours (Turks, Kalmuks, Circassians, Tatars). They dressed in bright colours and used much velvet and silk embroidered with lace and braids.

Sukhorukov, a Russian historian, describes various Don Cossacks: one wearing an azure satin coat with several silver stripes and a pearl necklace, another wearing a damask or velvet sleeveless kaftan and a dark brown woollen coat edged blue, with brown silk stripes and a last one wearing a damask or velvet coat with gold buttons, fastened with silver clasps and azure button laces. All of them wore Turkish style silk sashes with a damask knife in a black scabbard with silver fittings. They also wore baggy trousers, red, yellow or green Circassian boots and a fleece hat with a velvet crown. Caftan could be made of brocade, velvet, satin and damask.

George, an XVIIIth century ethnographer describes their clothing as follows:

“...Cossacks used to dress in Polish fashion with Tatar and Eastern style clothing. Various colours were in use for clothing, but caftans and short coats were often made of blue cloth. Their hair was cut in roundel. They wore a high bonnet of sheepskin. Coats of rank and file were girdled with an ordinary sabre strap or a belt of coarse fabric material. Leaders wore silken belt from Persia or Poland over the sabre belt. Sabre was worn over the short coat. Some cossacks, especially the rank and file had only a mustache, beard was less common. They wore woollen trousers, usually red, but other colours were also used. Half boots of black Morocco leather or simple leather. Leaders often dressed in red or yellow trousers and rarely wore black trousers. The Cossacks trousers were similar to the Turkish ones, but much tighter.”

The coat worn by the Don Cossack was midway between a uniform coat and the earlier cossack caftan.

During the Seven Years' War, only one regiment received uniforms. Other regiments adopted military-style uniforms inspired by the traditional Cossack style with adaptations introduced by their own commanders.

Troopers were usually armed with a lance, a sword and a pistol.

These regiments had probably no official standard even though they may had some unofficial ones.

N.B.: the Don Cossacks used a white stag on a blue field with golden hoofs and antlers, pierced by a golden arrow as an emblem and a coat of arm since the XVIth century.

Konstam A. & B. Younghusband : Russian Army of the Seven Years War, Osprey, London, 1996

Loginov, A.: Turkic influence in traditional dress of a Don Cossack XVI-XVIII centuries, [1], 2008

Roman Shlygin for the section on the origin and history of the unit.

Vasiliy Levashov for the translation of some Russian sources.