The regiment was raised in East Prussia in 1689 by Rittmeister Friedrich Wilhelm Count von Wittenhorst zu Sonsfeld as a dragoon regiment including some Free Companies. From June 24 to October 12 1689, the regiment took part in the siege of Bonn.

During the War of the Spanish Succession (1701-13), on August 13, 1704, the regiment fought in the Battle of Blenheim, taking two kettledrums. In 1715, it served in Pomerania against the Swedes.

In 1717, the regiment was transformed into a cuirassier regiment of four squadrons. In 1718, it was increased to five squadrons (10 companies).

From 1727, the regiment was stationed in Alt Mark.

By 1806, the regiment was known as the von Reitzenstein Cuirassiers. That year it took part in the Battle of Auerstädt (October 14) where it suffered very heavy losses (66%). The remainder served with Blücher and surrendered on November 11 at Magdeburg. The regiment was not re-raised. The depot became part of the new 4th Kürassiers.

On August 26 1756, when the Prussian army proceeded to the invasion of Saxony, the regiment was part of Ferdinand of Brunswick's column which had concentrated at Halle and advanced unopposed through Leipzig, Chemnitz, Freyberg and Dippoldiswalde, to the village of Cotta (reached on September 9) south of the Elbe near Pirna. On October 1, the regiment took part in the Battle of Lobositz where it was assigned to the cavalry brigade of Major-General Driesen in Katzler's Division. It lost 4 officers, 33 troopers during this battle. On October 23, when Keith's army left Lobositz to return to Pirna country, the regiment joined Frederick II at Linai to cover Keith's advance. On October 28, the whole force reached Gross-Sedlitz near Pirna and the regiment took its winter quarters soon afterwards.

This section describes the new uniform introduced in 1742. The previous uniform had red distinctive with yellow metal. 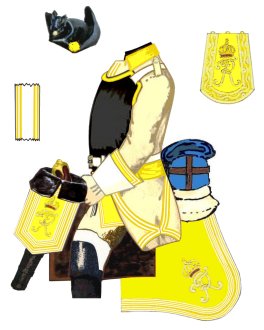 N.B.: silver embroidered buttonholes and a silver aiguillette on the right shoulder decorated the full dress uniform but were not present on the service uniform