The regiment was created by the decree of July 20 1743 from 6 companies taken from existing dragoon regiments (1 company per regiment).

During the War of the Austrian Succession, the regiment initially served on the Rhine in 1745. In 1746, it campaigned in Flanders. In 1747, it was transferred to Valence on the Provence theatre of operation. In 1748, it was back on the Rhine at Sélestat in Alsace.

By 1756, the regiment counted 4 squadrons and ranked 4rd.

In 1756, at the outbreak of the Seven Years' War, the regiment was stationed at Le Vigan.

In 1757, the regiment took part in the operations of the Army of the Lower Rhine. It was at the sieges of Gueldern and Jülich. It then took part in the conquest of East Frisia and in the occupation of Meppen, Venne, Leer and Emden. In December, it joined the French army operating in Hanover at Zell and then retreated. At the end of the year, it took its winter-quarters in the first line of the French army in the area of Göttingen.

From March 30 to April 4, 1758, after the retreat of the French army towards the Rhine, the regiment was with the army of the Comte de Clermont in the camp of Wesel on the Lower Rhine, on the right wing. In April, when Clermont redeployed his army along the Rhine, the regiment was placed in the third line at Heinsberg. After the successful crossing of the Rhine by an Allied army under Ferdinand of Brunswick on May 31, the regiment retired towards Rheinberg where it joined Clermont's Army on June 2. It remained in this camp, where it was placed on the flank behind the left wing, until June 12. On June 23, the regiment took part in the Battle of Krefeld where it formed part of the Reserve, under the Duc de Chevreuse. On August 5, it was part of Chevert's forces when he was defeated at the Combat of Mehr while attempting to capture Ferdinand's sole bridge on the Rhine. Chevert used the regiment to cover the retreat of his infantry. In Mid August, after Ferdinand's retreat to the east bank of the Rhine, the regiment, as part of the Army of the Lower Rhine now under the Marquis de Contades, recrossed the Rhine to follow the Allies. On August 20, it was encamped near Wesel where it formed part of the Reserve. In November, the regiment was part of the reinforcements sent to the army of the Prince de Soubise. The regiment, unaided, seized the town of Schwartzhausen and the Castle of Kalze.

By the end of January 1760, the regiment had taken its winter-quarters in the first line of the French army. By mid March, the regiment was billeted in Gelnhausen and Wächtersbach, still in the first line. By May 23, it was part of the right vanguard of Broglie's Army. Early on June 24, the Légion Royale, supported by Du Roy Dragons and La Ferronnaye Dragons, attacked the Allied rearguard near Homberg and forced it to retire. The regiment then took part in the siege of Ziegenhein. On September 13, it distinguished itself once more in a combat along the Werra where the Count von Bülow was defeated. By December 30, the regiment had taken its winter-quarters in Gotha.

On January 26, 1761, the regiment was at the Combat of Kindelbruck. On 15 February, it was present at the Combat of Langensalza, where it was deployed along the left bank of the Gera between Tottleben to Gebesee. On February 21, it marched on Kreimberg, attacked an artillery convoy and took 7 guns. On February 27, the Maréchal de Broglie established his headquarters at Friedberg and constituted a corps of 12 bns, 2 cavalry brigades and Du Roy Dragons to occupy the gap between Gelnhausen and Büdingen and to support the cordon of light troops established at Hungen, Nidda, Ortenberg, Wenings, Birstein and Salmünster. The regiment was then quartered in Einbeck. On March 21, it took part in the Engagement of Grünberg. By mid-April, the regiment was stationed in Aschaffenburg and Hanau. At the beginning of May, it was allocated to Prince Xavier’s Corps, which assembled at Fulda. On August 15, Lückner attacked M. de Belsunce on the heights of Alsar, capturing French infantry colours. An officer and 2 troopers of the regiment pursued Lückner's force, caught up with it and recaptured the colours. On November 13, the regiment, along with La Ferronnaye Dragons engaged Luckner Hussars. The French dragoons were forced to retire under the supporting fire of their infantry.

In March 1762, the regiment formed part of the Army of the Upper Rhine under Soubise. By mid-July, it was posted on the Schwalm under M. de Rochambeau. In mid-December, when the French army evacuated Germany, the regiment was directed to Landau.

In December 1762, a regulation introduced a brand new green uniform with rose red as the distinctive colour. 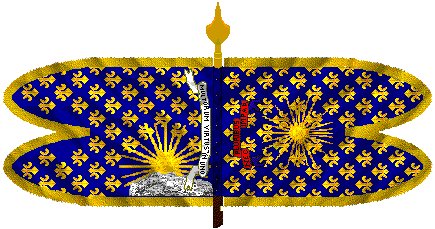 This article is mostly a translation Jean-Louis Vial's article “Du Roy Dragons” published on his website Nec Pluribus Impar. The article also incorporates texts from the following books which are now in the public domain: