Difference between revisions of "Ferntheil Infantry" 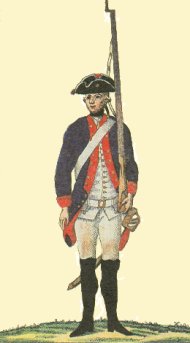 The regiment was raised in 1682. It took part in the following campaigns:

The regiment had two battalions each with 6 musketeer companies and 1 grenadier company, two 3-pdr guns for an authorised regimental strength of 1,940 men.

The successive regimental Inhaber were:

During the Seven Years War, the regiment was commanded by Colonel von Buseck.

In 1757, the regiment was with the Reichsarmee operating in Thuringia and Saxony. In August, this army combined with a French contingent under the Prince de Soubise to form a Franco-Imperial army for the planned reconquest of Saxony. By August 5, the regiment counted 1,389 men fit for duty. On November 5, the regiment took part in the disastrous Battle of Rossbach where it was brigaded with Cronegk Infantry and Kurtrier Infantry under von Ferntheil. 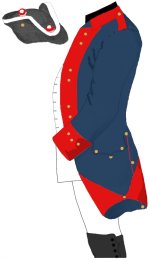 Troopers were armed with a musket, a bayonet and a short sabre ornamented with brass.

The colour of the drums was ponceau red with yellow-blue stripes.

Very early, the Franconian District had standardized the design of its colours. This design was further simplified around the middle of the XVIIIth century and was still in use during the Seven Years' War. In 1757, the number of colours per battalion was reduced from six to three. All old colours were removed and, for a while, each Franconian infantry regiment carried flagpoles without colour, becoming the laughter of other units. However, by the end of 1757, new sets of six colours were issued to each regiment.

Surprisingly, these colours were not carried during the war. Indeed, in 1775, the ambassador of Ansbach for the Franconian District reported to the margrave that:

“When troops of the Franconian District took the field in 1757, it was found useful to provide new colours to the three infantry regiments behind. The colours were made and no one thought that a dispute would arise between both religions about the mounting of the colours. But when mounting was about to happen, each party asked to make it according to the ritual of their church and, because of their disagreement, the mounting of the colours did not take place”.

So it seems that, although these colours were given to the regiments in January 1758, for religious reasons, they were never carried. In Germany it was customary that the colours were nailed to the flagpoles during a religious ceremony. As the regiment comprised Protestants as well as Catholics there was a grave dispute between them. The proprietors of these regiments repeatedly and vainly asked to use these colours.

There is also an additional explanation to the fact that the regiment did not carry its new colours. Roider states that, in 1759, a representative of the Ansbach delegation mentioned that the regimental commanders wanted the treasury of the district to pay for the festivities and celebrations surrounding the mounting of the colours whereas the district expected the commanders to pay out of their own pockets, citing their "rather large salaries". In the end, it seems that no one paid, no one celebrated and no colours were mounted.

The final result was that the regiment retained its old colours for which, besides the fact that their distinctive colour was red, we found no description.