The regiment was initially raised in 1691 as "Roi d'Angleterre" by James II with English exiles in France and placed under the command of Dominique Sheldon. The regiment was first stationed on the coast of Normandy. In 1693, it was transferred to Flanders where it fought in the Battle of Landen on July 29.

In 1698, the regiment was incorporated into the French army.

During the War of the Austrian Succession, the regiment initially took part in the relief of the Army of Bohemia in 1742. In 1743, it was back in Alsace. In 1745, it served in the campaigns of Flanders, taking part in the sieges of Tournai, Ourdenarde and Termonde. The same year, the regiment was sent to Scotland to help the Pretender. However, it was intercepted at sea and 3 of its 4 squadrons captured. The remaining squadron reached Scotland and, on April 16 1746, took part in the Battle of Culloden. After the defeat, it retreated to Inverness where it surrendered as prisoners of war. Upon its return to France, the regiment was reconstituted and sent to Flanders, taking part in the Battle of Rocoux on October 11 1746. On July 2 1747, it fought in the Battle of Lauffeld then, from July to September, it covered the siege of Berg-op-Zoom. From April to May 1748, it was at the siege of Maastricht.

In 1756, the regiment ranked 56th and counted two squadrons.

The regiment was disbanded on December 21 1762 with the mention "has served gloriously on all occasions".

Somewhere between August 23 and September 6 1757, the regiment joined the Army of Saxony, led by the Prince de Soubise, in the area of Erfurt and Eisenach. It was considered of poor quality. On September 27, it was brigaded with Lastic de Saint-Jal Cavalerie under M. de Saint-Jal in the second line of the left wing of the Franco-Imperial Army. On November 5, the regiment took part in the disastrous Battle of Rossbach where it was brigaded with Bourbon-Busset Cavalerie and La Reine Cavalerie. This brigade was placed in the first line of the left wing. During the battle, the regiment lost some of its standards and a pair of kettle-drums. At the end of the year, it took its winter-quarters in Bornheim in Hessen.

At the beginning of June 1758, the regiment left its winter-quarters in Hanau County to reinforce the army of the Comte de Clermont on the Lower Rhine. By June 12, it was still on its way. Later the same year, the regiment was used for coast guard.

By May 23 1760, the regiment was part of the right wing of the first line of Broglie's Army. On July 10, the regiment might have been attached to Prince Camille's Cavalry Corps who arrived too late to take part in the Combat of Corbach. By December 30, the regiment had taken its winter-quarters in Langenschwalbach.

The regiment was disbanded on December 21 1762. 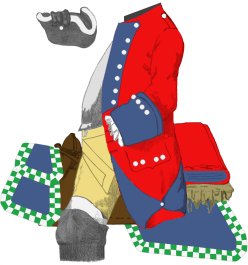 Pengel & Hurt in "French Cavalry and Dragoon, 1740-1762" give yellow coat and possible green facings. No references are given.