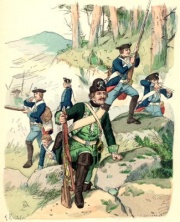 The unit was recruited from June 18 1756 at Frankfurt/Main from recruitment in the Reich (Holy Roman Empire). On August 18 1756, these troops were brought to Naumburg/Queiss for the set up of the battalion under the command of the former Palatine Lieutenant-colonel de Le Noble. The unit consisted of one battalion totalling some 500 men and consisting of:

According to Bleckwenn's classification system, the unit is designated as “Frei-Infanterie Regiment F1”.

In the winter of 1760-61, a second battalion was raised at Wittenberg but the first battalion having been captured at the second battle of Landeshut during the previous summer, the unit still consisted of a single battalion (only one single 2nd battalion).

In 1763, the unit was incorporated into the re-established Garrison Regiment VIII.

In the Spring of 1758, the unit took part in the invasion of Moravia, guarding the field-bakery. During the siege of Olmütz, the unit was attached to Mayr's corps of light troops posted to the east of the fortress. On June 8, along with Frei-Infanterie Salenmon, it was attacked by an Austrian force who captured many prisoners. During the retreat from Moravia, the unit formed part of the rearguard. On October 10, the unit fought at the battle of Hochkirch where it formed part of Retzow's corps near Weissenberg. The unit occupied the village of Wasser-Kretscham. On October 26, during Frederick's advance towards Silesia to relieve the besieged fortress of Neisse, the unit was among the first to cross the Neisse river.

During the winter of 1758-59, the unit operated in the Silesian mountains under the command of general Zieten.

At the beginning of the campaign of 1759, the unit was attached to the army of the king.

In the spring of 1760, the unit was attached to Fouqué's corps defending Upper Silesia. On June 23, the unit was captured by the Austrians at the second battle of Landeshut. It was later exchanged and increased to 2 battalions.

In the winter of 1760-61, a second battalion was raised and attached to the army of prince Henri in Saxony.

In 1762, the unit operated once more as part of the army of prince Henri in Saxony. On October 29, the unit fought at the battle of Freiberg.

Officers had tricorne wearing a scalloped silver lace and 2 black and white pompoms (1 in each side corne of the tricorne). They also wore a black and silver sash around the waist. Their coats were similar to those of the privates but had no turnbacks. Their waistcoat (and the pockets of this waistcoat) were edged with a silver braid.

Drummers wore uniforms similar to those of the privates with the following distinctions:

The drums probably had a red and white rim.

Privates were armed with a rifle and a curved blade sabres. The sabre had yellow cords and tassels.

Digby Smith and Michael Zahn for the information provided for the creation of the initial version of this article.