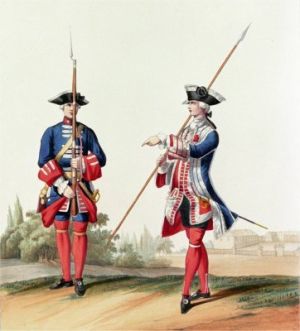 The regiment was created at Rouen in Normandy by the Queen-Mother on August 1, 1563 under the name of Enseignes de la Garde du Roi and disbanded in 1573. It was re-established the following year on October 1. The Gardes Françaises had precedence over the Gardes Suisses and over all line infantry regiments.

The regiment did not recruit any foreigners including French subjects from newly conquered cities and provinces such as Strasbourg and Alsace.

In 1742, during the War of the Austrian Succession (1740-48), the regiment initially served in Flanders. In 1743, it was part of the French army, which invaded Bohemia but it was soon back on the Rhine where it took part in the Battle of Dettingen (June 27). From 1744 to 1748, the regiment operated in Flanders. On May 11, 1745, the 6 battalions of the regiment took part in the Battle of Fontenoy where the Comte d'Auteroche made the famous statement "Tirez les premiers, Messieurs les Anglais". The regiment lost 400 men from the first salvo of the British infantry and was almost broken. Only the intervention of its 5th and 6th battalions along with a counter-attack led by Irish and Swiss regiments prevented this and turned the impeding defeat into a victory.

From 1751, the first battalion of the regiment exercised with the Prussian drill.

The regiment counted 6 battalions for a total of 30 companies of fusiliers and 3 of grenadiers. Each battalion had 5 fusilier companies and half a grenadier company. Its staff consisted of:

A fusilier company counted 146 men and officers and consisted of:

A grenadier company counted 117 men and officers and consisted of:

So, that put a battalion at 788 men and officers (including about 58 grenadiers). During peacetime, 4 companies (changed every four months) guarded the outside of the palace where the king resided.

The first battalion of the regiment did not take part in any campaign of the war.

By August 1, 1757, the 6 battalions of the regiment were stationed in Paris. Later during the year, 4 battalions were sent to Aunis to defend the province against a possible British landing. However, they were called back when they reached Tours as the French commanders realised that this British landing would not take place.

In 1758, 4 battalions of the regiment were sent to the coast of Flanders and garrisoned Dunkerque and Saint-Omer from March to December.

In the summer and autumn of 1759, 300 volunteers of the regiment stationed in Flanders were assigned to Thurot's squadron which was blockaded in the harbour of Dunkerque by a British squadron under the command of Commodore William Boys. In October, Boys's squadron was driven from its station by a gale. On October 15 at 5:00 p.m., Thurot seized the opportunity, slipped out through a thick fog and made to the northward. He then sailed for Ostend, then to Göteborg in Sweden, partly to procure stores, and partly, no doubt, to baffle pursuit or observation. There he remained for 19 days, going next to Bergen in Norway. On December 5, Thurot's flotilla quit Bergen and proceeded to the British seas, by way of Streymoy in the Faroe Islands.

On January 25 1760, Thurot's flotilla reached the neighbourhood of the Irish coast. The weather confounded an intended descent near Londonderry, and scattered his flotilla. On February 15 (or 17), Thurot's flotilla put into Claigeann Bay, in the Island of Islay in Argyleshire to refresh. They boarded and plundered two small sloops lying at anchor in the small bay of the island. The French crews then landed on the island. On February 19, Thurot left Islay. On February 20, he anchored in Belfast Lough, opposite Kilroot Point. On February 21, the detachment of the regiment took part in the attack on Carrickfergus which soon capitulated. On February 25 at 8:00 p.m., Thurot re-embarked his troops. On February 27 at 10:00 p.m., Thurot finally sailed from Carrickfergus for France. On February 28 at 4:00 a.m., 3 British frigates got sight of Thurot's flotilla as it rounded Copeland Island and gave chase. At 6:00 a.m., they caught up. At 9:00 a.m., they engaged the three French frigates. The engagement lasted about 90 minutes before the French were forced to strike theirs colours. The French prisoners were brought to Ramsey on the Isle of Man then to Belfast where they arrived on March 2. On May 10, they were freed and transported to France.

Meanwhile, in April 1760, 4 battalions of the regiment were sent to Germany to reinforce the Army of the Duc de Broglie. By May 23, these four battalions were part of the Gardes and Gendarmerie Reserve of Broglie's Army, placed under the command of M. de Duras. On July 10, these battalions encamped at Berndorf. By July 14, they were part of the corps deployed between Mühlhausen and Berndorf to link the positions of Saint-Germain's Army with Broglie's Main Army.

By March 1762, the 4 battalions had returned to Germany and joined Condé’s Army of the Lower Rhine. At the end of May, they were stationed at Gladbach and Erkelenz. On November 10, the regiment, along with the Gardes Suisses, and the larger part of each cavalry regiment were sent back to the Main River. On August 25, the 4 battalions were present at the Engagement of Grüningen), where they were deployed in the centre of the second line. On August 30, they were present at the Combat of Nauheim, but were not engaged. At the end of December, when the French evacuated Western Germany, the 4 battalions of the regiment were directed on Landau. 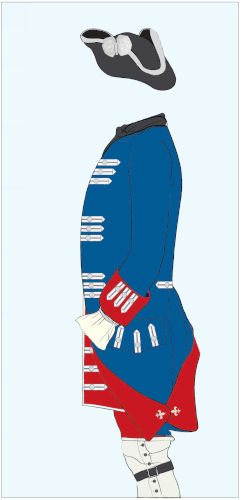 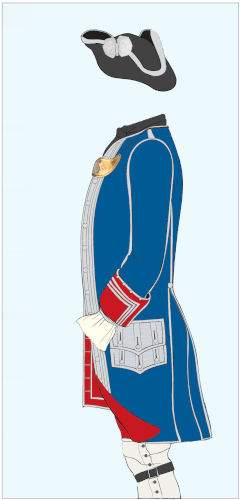 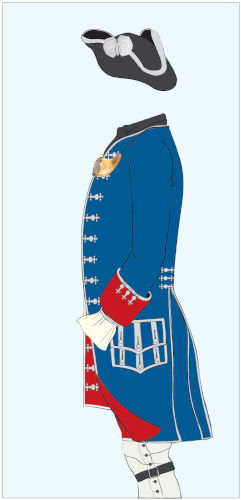 Colonel colour: white field with a white cross; each branch of the cross carried a golden crown at its end.

Ordonnance colours: white cross with 4 blue cantons; each cantons carried golden fleurs de lys; each branch of the cross carried a golden crown at its end.

N.B.: another interpretation of the ordonnance colours depict each canton with 10 golden fleurs de lys arranged in 4 rows (3-2-3-2 from top to bottom).