This Piedmontese regiment initially served as auxiliary in the French Army until the Treaty of the Pyrenees in November 1659. It had been raised in April 1644 by Thomas Emmanuel Philibert of Savoy, prince of Carignan. It was known as “Carignan” and counted 1,000 men.

In 1649, the regiment was recalled to France to face the troubles of the Fronde (1648-1653). It served in Guyenne where it remained until 1652. In 1652, then counting 30 companies, it joined the court who had taken refuge behind the Loire River. Under the command of Turenne, it accompanied Louis XIV to Paris and took part in the Battle of the Faubourg Saint-Antoine. In October the 8 first companies returned to Piedmont soon followed by the 22 others. The entire regiment took its winter-quarters in Dauphiné.

In 1653, in the continuation of the Franco-Spanish War, the regiment took part in the combat of La Roquette on the Tanaro and had its winter-quarters in the Saint-Martin Valley. In 1655, it was at the siege of Pavia; in 1656, at the siege of Valencia; and in 1658, at the siege of Mortare.

After the Treaty of the Pyrenees, in November 1659, The Prince de Carignan gave his regiment to Louis XIV. The unit thus officially joined the French Army but was reduced to 10 companies.

In May 1665, the ten companies of the regiment (a total of 1,000 men) were sent to La Rochelle to embark for Canada along with a German regiment known as “Balthazard”. The Prince de Carignan did not accompany his regiment to Canada and the troops taking part in the expedition were placed under the command of M. de Balthazard. In fact, these troops were assembled in a sort of temporary unit known under the name of “Carignan-Balthazard” who kept two colonels coulours. The colonel company issued from “Carignan Infanterie” ranked first. M. de Balthazard died the same year and was replaced by M. de Sallières, formerly first captain of “Balthazard Infanterie”. The composite unit was thus renamed “Carignan-Sallières”. This regiment became the first regular regiment in the pay of the state to cross the Atlantic and to campaign in America.

Upon its arrival in Québec, the regiment was immediately involved in an expedition against the Iroquois tribes of Lake Champlain. Under the supervision of Captain La Mothe, men of the regiment erected Fort Sainte-Anne in an island on the lake. In October 1666, 600 men of the regiment joined a force under M. de Tracy, also including 1,200 colonists and Algonquin Indians. This expedition set off from Fort Sainte-Anne to destroy Iroquois villages. It sailed southwards on Lake Champlain and before entering into Lake Saint-Sacrement (present-day Lake George), it built a small fort near the falls separating the two lakes. M. de Sallières was left behind in this fort with four companies of the regiment. Meanwhile, the expedition continued its advance through dense forests, destroying Iroquois villages. By 5 November, the expedition was back to Québec. In June 1668, the two colonel companies (each of 60 men) arrived at La Rochelle while the soldiers of the other companies remained in Canada and joined the colonists.

From 1668 to 1671, the two colonel companies were maintained independently.

In 1671, as war with the Dutch Republic looked unavoidable, the Prince de Carignan received to order to increase his regiment to 16 companies. The prince proposed to M. de Sallières to incorporate his own colonel company in the regiment and to assume the charge of colonel-commandant. M. de Sallières accepted the offer and the regiment adopted the name of “Carignan-Sallières Infanterie”. Until 1718, this regiment exceptionally carried two colonels colours.

In 1672, at the outbreak of the Franco-Dutch War (1672–78), the regiment assumed garrison duties in Courtrai until 1674, when a few companies were sent to Sicily where they took part in the defence of Castellazo. In 1675, the bulk of the regiment was transferred from Courtrai to Huy. In 1676, it evacuated Huy after razing the fortifications and went to Philippeville to assume garrison duties. On 18 July 18, 1676, the regiment became the property of Louis-Thomas de Savoie, Comte de Soissons, a nephew of the Prince de Carignan and father of the famous Prince Eugène de Savoie. The regiment took the name of “Soissons Infanterie”. M. de Sallières, resigned from his charge of colonel-commandant. In 1677, the regiment took part in the sieges of Valenciennes, Cambrai and Saint-Ghislain. In 1678, it was at the capture of Ghent and Ypres before taking the road towards Alsace where it participated in the conquest of Kehl. In 1679, it campaigned on the Rhine.

In 1688, at the outbreak of the Nine Years' War (1688–97), the regiment joined the Army of the Rhine and participated in the capture of Philisbourg, Mannheim and Frankenthal. In 1689, it campaigned in the Netherlands and fought in the combat of Walcourt and in the combat of Gerpines. In 1690, it took part in the Battle of Fleurus. In December of the same year, Louis XIV, displeased with the Comte de Soissons, took away his regiment and changed its name to “Perche Infanterie”. In 1691, the grenadiers of the regiment distinguished themselves at the siege of Mons and their sergeants obtained the privilege to carry forks. The same year, the regiment took part in the bombardment of Liège before being transferred to the Rhine. In 1692, it campaigned once more on the Rhine. In 1693, it was transferred to the Army of the Alps where it fought in the Battle of Marsaglia. It later took part in the attack on the Castle of Martignana. In 1696, it participated in the siege of Valencia and was then transferred to the Army of the Rhine.

In 1714, the regiment returned to France where it was reduced to a single battalion.

In 1744, Perche Infanterie was disbanded and amalgamated into the newly raised Gardes Lorraines Regiment (raised by the king of Poland on April 6, 1740) as its first battalion. By this amalgamation, the new regiment inherited the rank of the former Perche Regiment. During peace time, the regiment was attached to the service of the king of Poland but during wartime, it was in the French service.

In 1744, during the War of the Austrian Succession (1740-48), the regiment served in the Alps and took its winter-quarters in Aix-en-Provence. In 1745, a battalion of the regiment took part in the capture of Montezemoto and then remained at Millesimo to protect the left flank of the French Army who had launched an offensive on the coasts of Provence and Genoa. At the beginning of 1746, the regiment was present at the Siege of the Fortress of Alexandria in Italy. On March 5, it quitted Alexandria to make a junction with Maillebois' Corps. On March 19, the regiment was at Pozzol-Formigaro and counted 952 men. On June 16, it suffered heavy losses (8 captains and 3 lieutenants wounded; 75 soldiers killed and 107 soldiers wounded) at the Battle of Piacenza. On August 10, the regiment distinguished itself at the Battle of Rottofreno, suffering heavy casualties once more 1 officer killed, 12 wounded and 5 taken prisoners; 280 soldiers mising and 187 wounded). On August 23, the French Army crossed the Apennine Mountains near Voltaggio. By November 24, the regiment was in Grasse, counting only 361 men. From May 20 to 22 1747, the regiment left its winter-quarters in Montpellier and Nîmes to join a French force on the Var River on June 8. On September 20, an ordonnance prescribed the creation of a third battalion which was raised at Vienne on October 24. On November 6, exchanged prisoners arrived at Vienne to form the backbone of this new battalion. On March 1 1748, the three battalions of the regiment assembled at Vienne. On April 23, the two first battalions then marched to join the French army of Italy in June. Meanwhile, on June 4, the third battalion marched from Vienne towards Toulon where it arrived on June 22. At the end of the war, the third battalion was disbanded. 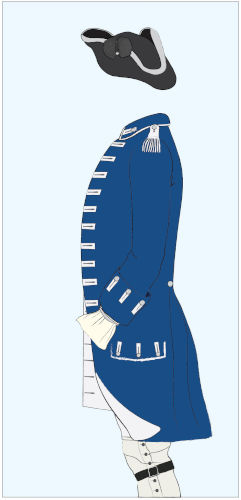