The regiment was raised in 1648 and garrisoned at Rotenburg.

On May 26 1758, the regiment was with Ferdinand's main force in the camp of Nottuln. On May 31, it accompanied Ferdinand in his offensive on the west bank of the Rhine.

In June 1759, the regiment was part of Wangenheim's Corps who had taken position at Dülmen in Westphalia to observe the movement of a French corps under the Marquis d'Armentières. On August 1, the regiment took part in the Battle of Minden where it was deployed in Lieutenant-General Wangenheim's Corps between Kutenhausen and the Weser, in the first line of the infantry centre. It took part in the assault of the village of Todtenhausen on the right flank.

On July 10 1760, the regiment took part in the Combat of Corbach where it was deployed in the right column under Lieutenant-General Count von Kilmannsegg.

By May 23 1762, the regiment formed part of the main Allied army where it was attached to Colonel von Rhoedern's Brigade. On June 24, the regiment took part in the Battle of Wilhelmsthal. 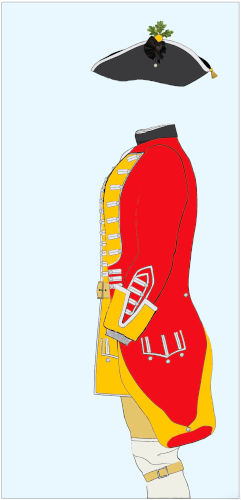 N.B.: Some sources mention buff as the distinctive colour and yellow for laces.

Niemeyer Joachim, and GeorgOrtenburg, The Hanoverian Army during the Seven Years War