The regiment was raised in Osnabrück in 1675. It initially consisted of four companies.

In 1678, the regiment participated in the relief of Hamburg, threatened by the Danes.

In 1680, the regiment was reduced to two companies, but was soon re-established at four companies in 1682. In 1683, two additional companies were recruited.

In 1686, the regiment was once more posted on the Elbe to guard Hamburg against Danish entreprises.

In 1757, during the French invasion of Hanover, the regiment retired towards Stade with the Allied army which finally capitulated.

On May 26, 1758, the regiment was with the main force of Ferdinand of Brunswick in the camp of Nottuln. On May 31, it accompanied Ferdinand in his |offensive on the west bank of the Rhine. On June 23, the regiment took part in the Battle of Krefeld where it was deployed on the left wing as part of the brigade under Lieutenant-General Spörcken.

In June 1759, during the French offensive in Western Germany, the regiment was part of Wangenheim's Corps who had taken position at Dülmen in Westphalia to observe the movement of a French corps under the Marquis d'Armentières. On August 1, the regiment took part in the Battle of Minden, one squadron was attached to the first line of cavalry commanded by Lord Sackville whose deliberate inactivity kept the unit out of any serious action. The other squadron was in Wangenheim's Corps between Kutenhausen and the Weser, in the second line of the cavalry right wing under Major-General von Grothausen. This second line acted as a reserve. In this battle, the regiment lost Captain von Harling and Cornet Niemitz wounded.

On July 10, 1760, the regiment took part in the Combat of Corbach where it was deployed in the right column of the main corps under Lieutenant-General Count von Kilmannsegg.

On February 15 1761, the regiment was among the Allied forces who launched a surprise attack on Langensalza against the Saxon Contingent fighting along the French Army. On July 16, the regiment took part in the Battle of Vellinghausen where it was deployed on the right wing under the Hereditary Prince of Brunswick. By July 28, the regiment was at Erwitte; and by August 18, at Steinheim. In September, it joined the Allied corps encamped at Wilhelmstadt

By May 23 1762, in preparation for the campaign in Western Germany, the regiment was attached to the Corps of the Hereditary Prince of Brunswick operating in Westphalia. On June 25, the Hereditary Prince advanced up to Buer with 4 sqns (detachments of the present regiment along with Brunswick Carabiniers, Hessian Gens d'Armes and Bock Dragoons and fell into an ambush drawn in a wood near Recklinghausen by the Dragons Chasseurs de Conflans. The Hereditary Prince was himself captured by 2 French hussars before being delivered by 20 troopers of Bock Dragoons. In this action, the Allies lost 20 men killed and 200 troopers taken prisoners; the French a few men killed and about 15 wounded. On August 30, the regiment took part in the Combat of Nauheim where it was attached to Lieutenant-General Oheimb's column. Around 8:30 a.m., the Hereditary Prince instructed Lieutenant-General Oheimb to detach 8 squadrons (including this regiment) to reinforce Jeanneret and to support Luckner's attack on Dorheim with the rest of his corps. 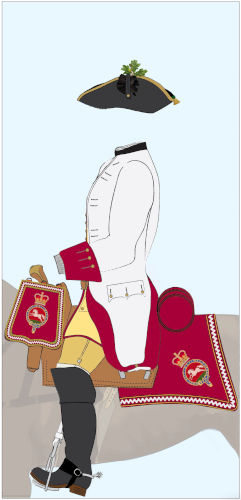 The musicans were trumpeters and a kettle-drummer. They were usually dressed in reverse colours; staff trumpeter probably carried NCO distinctives.

The apron of the kettle-drums and the banners of the trumpets were red, carrying the Arms of England with the motto “DIEU ET MON DROIT” underneath. 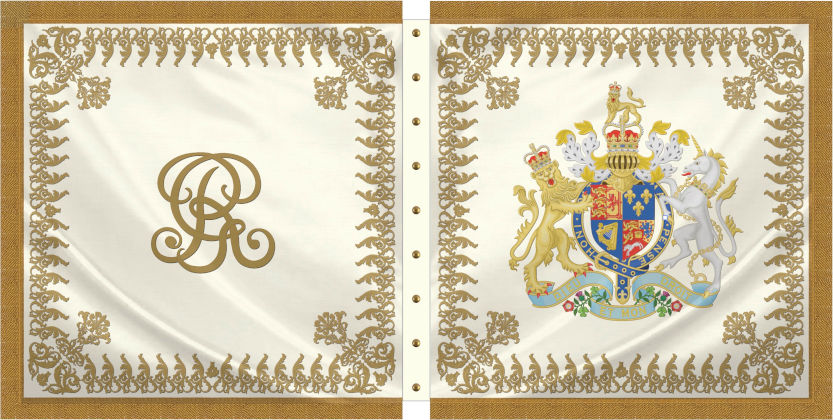 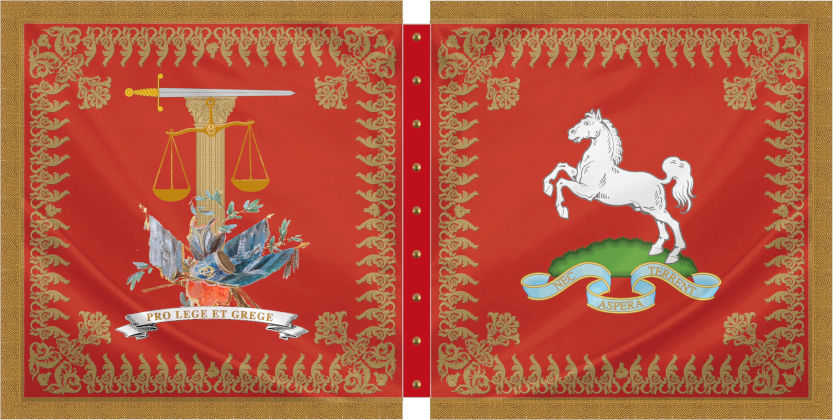