The regiment was raised in Breisgau on October 30 1734 by Colonel Johann Baron von Ghilányi at his own expense. It initially comprised only 4 companies.

During the War of the Polish Succession, in 1735, the newly-raised regiment served on the Rhine in the Corps of the Moselle and took part in the combat of Clausen. From 1737 to 1739, it campaigned in Siebenbürgen (present-day Transylvania) and Wallachia. In 1738, it joined the main army but saw no action.

By 1739 the regiment recruited in Slavonia.

After the war, in 1748, the regiment recruited in the Netherlands. The same year, it incorporated part of the disbanded regiment Trips Hussars.

At the outbreak of the Seven Years' War, the regiment counted 10 companies in 5 squadrons.

The regiment was under the nominal command of:

After the Seven Years' War, the regiment assumed garrison duties in Hungaria.

In 1768, the regiment was split up between various hussar regiments. 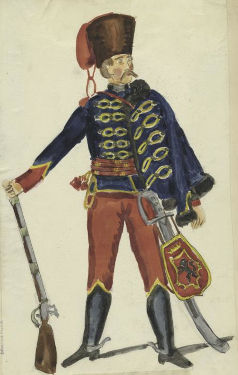 In June 1756, at the beginning of the Seven Years' War, the regiment was stationed in Hungary and counted 605 men and 375 horses. On October 1, it took part in the battle of Lobositz where it was deployed in the vanguard in front of the village of Lobositz. During the winter of 1756-57, the regiment received a sixth squadron, this brought its forces to 12 companies in 6 squadrons for a total of 1,060 men.

In 1758, the regiment served with the Reichsarmee but saw no action.

On November 20 1759, the regiment took part in the battle of Maxen where it was attached to the Reichsarmee Contingent deployed near Gieshübel under the command of Prince Stolberg.

In 1760, the regiment served in Saxony where it took part in the combat of Strehlen and the capture of Torgau.

In 1761, the regiment served once more in Saxony, seeing no action.

In 1762, the regiment served once more with the Reichsarmee for the campaign in Saxony where it took part in the combats of Dorfchemnitz and Pretschendorf and in the battle of Freiberg.

On October 10, 1753 Hadik ordered the commander of his regiment to make sure that every hussar was to have 1 pair of breeches, 1 pair of boots and 1 cap in reserve. Off duty and as an ordonnance the hussars were to wear the mirliton instead of the kolback.

The 1757 reform, stated that all hussar regiments should be dressed in dark blue uniform with yellow distinctives. However, this regulation seems to have been followed only by Kaiser Franz I Hussars. The present regiment retained its former uniform. 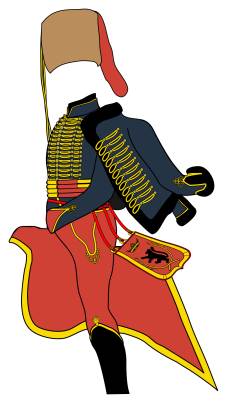 Troopers were armed with a short, curved sabre, a musket and two pistols.

Knötel shows a uniform identical to the one depicted in our table.

Donath depicts a uniform similar to those of the troopers with the following distinctions:

Digby Smith for the initial version of this article and User:Zahn for information on the uniform