The regiment was raised in 1745 from the 3rd battalion of Bourden Infantry. This battalion had originally been raised for Bourden in 1744. Bourden, himself, deserted to the French in 1745 and his regiment was split into three regiments: Graf Keilmannsegge (later 12A), Brunck (later 12B) and Hohorst (later 13A).

During the first half of 1759, the regiment formed part of the Allied army of Ferdinand of Brunswick. It was attached to Post brigade in the first line of the infantry centre. On April 13, it took part in the battle of Bergen where it formed part of the second column under the Prince von Ysenburg. The French units in Bergen were soon strengthened by a reserve. Prince von Isenburg, who had been a rallying point for Hessian resistance against the French, fell leading the repeated assaults up a steep slope against the abattis situated around the village. The Hanoverian and Hessian troops then withdrew. In June 1759, the regiment was part of Imhoff's corps operating in Hesse.

On February 15 1761, the regiment took part in the combat of Langensalza. On July 16, it took part in the battle of Vellinghausen where it was deployed in Wolff's Corps, detached by Spörcken from Herzfeld to reinforce Wutginau.

By May 23 1762, the regiment served in Granby's Corps forming the left wing towards Dörnberg. On June 24, it took part in the battle of Wilhelmsthal. 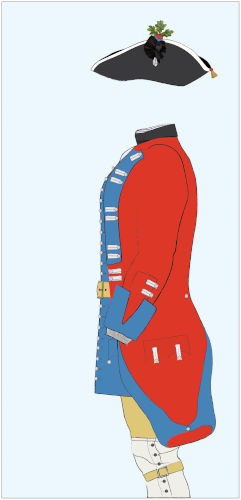 Niemeyer, Joachim, and Georg Ortenburg, The Hanoverian Army during the Seven Years War