The regiment was created in 1751 by the Duchess of Sachsen-Gotha with two companies of the “Grenadier-Garde” to which were added two new companies. The unit was known as the “’’Herzogin Bataillon’’” (Duchess’ Battalion) and was placed under the command of Colonel von Uechteritz.

In 1757, three companies from the “Erbprinz Friedrich Regiment” were added to the regiment which was organised as a Hanoverian battalion, although counting only seven companies; and renamed “Erbprinz von Sachsen-Gotha”. On April 15 of the same year, the regiment was taken into Hanoverian service under British pay as an auxiliary unit. However, it still belonged to the Duchy of Sachsen-Gotha.

On January 25 1759, the regiment was fully integrated into the Hanoverian Army, keeping its name of “Sachsen-Gotha”. It received new uniforms, colours, drums and grenadier mitre caps similar to those of the other Hanoverian infantry regiments.

This regiment consisted of one battalion and counted 798 men. At the beginning of the war, it fought alongside the Hanoverian infantry regiments. Later on, it was mainly used as an escort for the artillery and pontoon trains.

During the Seven Years War the regimental commander were:

In 1763, the regiment assumed garrison duty in Göttingen with three companies in Northeim and one company in Münden.

On April 18 1757, the regiment, now under British pay, marched from Gotha to join the allied army. On May 1, it arrived at the camp near Hameln. On July 26, during the French invasion of Hanover, the regiment took part in the battle of Hastenbeck where it was deployed in the first line of the right wing under the command of Lieutenant-General Zastrow. At the end of November, it joined the allied army assembling near Celle for a counter-offensive in Hanover. It was detached to cover the bakery at Uelzen.

For the campaign of 1758, the regiment was allocated to a corps under the command of Lieutenant-General Imhof posted on the Rhine. On June 17, during the Allied offensive on the west bank of the Rhine, when Spörcken left his camp at Rheinberg, he left General Hardenberg at Büderich with this regiment and Stolzenberg Infantry). On August 5, the regiment fought in the combat of Mehr where it formed part of Imhoff's force who repulsed the French attempt directed against the Allied bridgehead at Rees. At the end of August, the regiment was sent to Warendorp to cover the magazines and bakery.In December, when the allied army took up its winter quarters in Westphalia, the regiment was quartered in Warendorp.

In March 1759, the regiment was allocated to Hardenberg’s Corps who marched to Hesse. At the beginning of April, the regiment was at Marburg but it soon rejoined the main army in Sauerland for the incoming campaign. In June, it was part of the main allied army under the command of the Duke Ferdinand of Brunswick. On August 1, the regiment took part in the Battle of Minden where it escorted the artillery of the 2nd column under Major Haase. In September, it was at the siege and capture of Marburg.

In 1760, the regiment campaigned with the main army but did not see action. 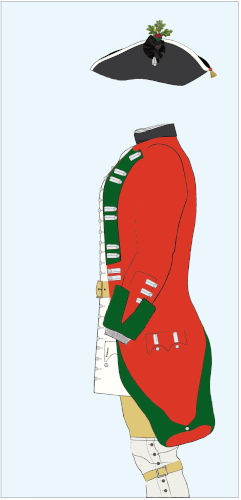 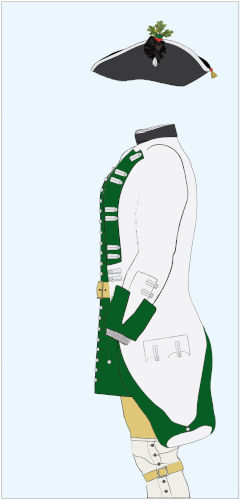 N.B.: before being incorporated into the Hanoverian army at the beginning of 1759, the regiment had a white uniform as illustrated here. 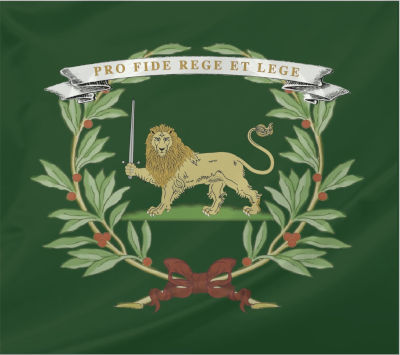