The regiment was first raised in 1631 during the Thirty Years' War. At the end of the war, in 1648, it was reduced to four companies.

In 1662, when Emperor Leopold experienced troubles with Rákóczi, supported by the Turks, in Transylvania, the regiment was increased to 12 companies. In 1664, it was sent to Hungary. The Imperial army tried to stop the Turks on the Raab (present-day Rába River) and then defeated them in the Battle of Saint Gotthard. The regiment then returned to Hanover.

In 1666, the regiment took part in the relief of Bremen, bombarded by the Swedes.

In 1668, during the War of Devolution (1667–68), the regiment, who had been placed in Dutch pay, marched through the County of Bentheim and encamped near Hardenberg. However, peace was concluded before its arrival in the Dutch Republic.

In 1671, the regiment took part in the capture of the City of Braunschweig.

In 1685, during the Morean War (1684-99), the regiment (8 companies of 100 men each) was sent to Greece to assist the Venetians in the conquest of Morea. In 1686, it received four additional companies and took part in the Battle of Argos. In 1687, now counting only eight companies, it took part in the siege of Patras and in the siege and capture of Athens before returning to Venetia.

In 1733, part of the regiment joined the force who quenched revolt in the City of Mühlhausen.

On May 11 1756, George II sent a message to both houses of the Parliament to request funding for the defence of the country. The Parliament granted him one million pounds. Meanwhile, from May 11 to 14, a Hanoverian contingent of 12 battalions (including the present regiment) gradually embarked aboard 21 British transports at Stade for the reinforcement of Great Britain. On May 22, the Hanoverian contingent disembarked in England and the regiment marched to Canterbury. In August, it was transferred to a newly formed camp at Coxheath near Maidstone. At the beginning of November, it became clear that Brunswick-Lüneburg (aka Hanover) was more seriously threatened than England and it was decided to gradually send the Hanoverian contingent back to the continent. On December 5, the 4 first battalions (including the present regiment) of the Hanoverian contingent re-embarked at Chatham to return to Germany.

In 1757, the regiment, who had initially been placed in garrison in Einbeck, went to the camp of Tündern near Hameln. On July 26, during the French invasion of Hanover, the regiment took part in the battle of Hastenbeck where it was deployed in a detachment posted between Afferde and Diedersen. This detachment executed an outflanking movement against the French offensive at Hastenbeck and caused near panic among the French towards the conclusion of the battle. In September, it was with the Allied army when it capitulated at Stade. At the end of November, after the disavow of the capitulation by George II, the regiment took part in the Allied counter-offensive in Hanover and in the siege and recapture of Harburg under Lieutenant-General Hardenberg. Captain Behr was wounded during that siege. The regiment then returned to Bremen.

In March 1758, during the Allied winter offensive in Western Germany, the regiment took part in the siege and recapture of Minden under Lieutenant-General Oberg. On March 14, Minden surrendered. On May 26, the regiment was with Ferdinand's main force in the camp of Nottuln. On May 31, it accompanied Ferdinand in his offensive on the west bank of the Rhine. On June 23, the regiment took part in the battle of Krefeld where it was deployed on the right wing under the command of the Erbprinz (Hereditary Prince) of Brunswick. At 1:00 p.m., it followed the Hereditary Prince in his attack against the wood held by Saint-Germain Division. Towards the end of the battle, the Hereditary Prince and Gilsa rallied Allied infantry units (probably including this regiment) and advanced onto the plain. The Comte de Gisors at the head of 4 squadrons of Carabiniers charged these advancing battalions who let them close in to about 20 paces before firing a devastating volley mowing down in an instant most of the first rank. A single squadron managed to break through but the third rank of infantry knocked it down. In this battle, Lieutenant Mühlenfeld of the regiment was wounded. The regiment then took part in the capture of Düsseldorf where it was placed in garrison. At the beginning of August, the garrison recrossed the Rhine to join the retreating Allied army. In October, when the Allied army marched from Münster to Lippstadt, the regiment guarded the bridge of Bennighausen to cover the army.

In June 1759, the regiment was part of the main Allied army under the command of the Duke Ferdinand of Brunswick. On August 1, the regiment took part in the battle of Minden where it was deployed in the first line of the 4th column under Major-general von Scheele. Ensign von Wersabe was killed in this battle.

On November 13 1761, when Ferdinand established his headquarters at Einbeck, the Allied army took its cantonments to the exception of a corps placed under the command of Lieutenant-General Conway who took position along the Huve near Einbeck. The regiment formed part of this corps.

By May 23 1762, the regiment served with the Main Allied Army in Major-general von Bock's Brigade. On June 24, it took part in the Battle of Wilhelmsthal under the command of Ferdinand of Brunswick.

At the end of the war, the regiment was placed in garrison in Hameln. 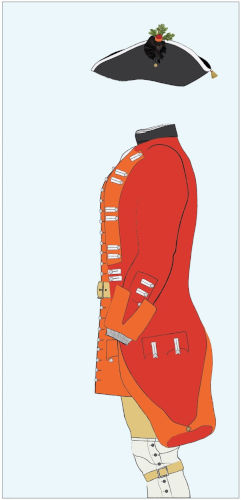 N.B.: all textual sources indicate orange as the distinctive colour but graphical sources show a rather pale orange (almost buff). Furthermore, Wissel mentions that the waistcoat was changed to white in 1761 while lapels and cuffs were changed to citrus yellow. 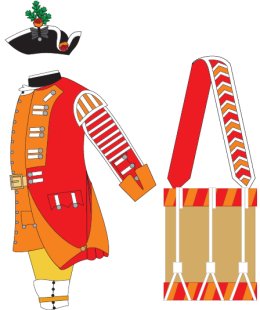 Regimental Flag: Orange field, lion rampant armed with a sword, below a trophy of arms, white scroll, motto above "OFFENDO ET DEFENDO", flower blossoms on the edge of the flag. Hereafter, we present an illustration from the Reitzenstein Sammlung, dating from circa 1761 (left) and the interpretation of Hannoverdidi (right).