Until 1707, the regiment shares the same history as the regiment Sporken Infantry raised in 1617 as a unit of the Principality of Brunswick-Celle which remained independent from Hanover until 1705. It consisted of 2 grenadier companies and 10 musketeer companies organised in two battalions.

The unit was one of the four regiments that this principality maintained during the Thirty Years' War (1618-1648) to serve with the Imperial Army. In 1625, the regiment took part in the Battle of Hanover. In 1626, it fought in the battles of Calenberg and Lutter am Barenberge. In 1632, the House of Lüneburg changed side and allied itself with Sweden and the four regiments of the Principality of Brunswick-Celle joined the Swedish Army. The same year, they took part in the Battle of Lützen and in the Combat of Hessisch-Oldendorf. In 1642, the regiment was reduced to 4 companies. After the Treaty of Westphalia, in 1648, each of these companies was further reduced.

In 1666, the regiment was sent to the relief of Bremen, besieged and bombarded by the Swedes.

In 1668, the regiment participated in the unsuccessful expedition to support the Venetians at Candia (present-day Heraklion) in the Island of Crete.

In 1671, the regiment took part in the siege and capture of Braunschweig.

In 1675, the regiment marched to Bremen country where it captured Buxtehude and Bremervörde, and blockaded Stade until its surrender in August 1676. Then Duke Georg Wilhelm sent these troops to reinforce the Brandenburger Army in Pomerania. The regiment took part in the capture of Anklam and Demmin. In 1677, it was at the long but successful siege of Stettin. A few Lüneburger regiments then blocked all the passes leading from Mecklenburg to Pomerania. In 1678, the regiment accompanied Brandenburger troops in an expedition on the Island of Rügen. During this campaign, Stralsund, Greifswald and Dammgarten were also taken. The regiment then took part in the capture of the Fortress of Büzow in Mecklenburg.

In 1679, when Denmark blockaded Hamburg, the regiment joined a force assembled on the Weser. It then marched towards the Elbe, forcing the Danes to retire. The same year, the regiment was reduced to 10 companies.

In May 1700, the regiment took part in the campaign against the Danes and was at the attack on the Castle of Keinbeck.

In 1702, during the War of the Spanish Succession (1701-13) the regiment marched to the Netherlands. In 1704, it took part in the Battle of Blenheim. In 1705, it was incorporated in the Hanoverian Army. In 1706, it fought in the Battle of Ramillies and took part in the sieges of Dendermonde and Menin. In 1707, the regiment was subdivided in two distinct units. The present battalion forming a regiment under Colonel Hodenberg and the other, a regiment under Colonel Melville. The new regiment joined an Imperial army under the command of Elector Georg Ludewig near Erlingen on the Rhine. The regiment served for the rest of the war with this army.

In 1715, the regiment garrisoned Osnabrück.

In 1719, the regiment formed part of the army sent against the Russians and Mecklenburgers.

In 1733, the regiment formed part of the troops who quenched the revolt of the peasants and relieved Güstrow.

In April 1756, the regiment was part of the Allied reinforcements sent to Great Britain. It took up cantonments in Canterbury. In August, it was transferred to the camp of Maidstone.

In March 1757, the regiment was sent back to the continent.

On February 23 1758, at 7:00 a.m., during the Allied winter offensive in Western Germany, the regiment was part of a detachment under the command of the Hereditary Prince who advanced on Hoya. It passed the Weser on boats and attacked the town. In March, the regiment took part in the siege and capture of Minden. On May 26, the regiment was with Ferdinand's main force in the camp of Nottuln. On May 31, it accompanied Ferdinand in his offensive on the west bank of the Rhine. On June 12, during the aborted attack on the French positions at Rheinberg, the regiment was in the second vanguard of the second column of attack under Major Stockhausen. On June 23, the regiment took part in the Battle of Krefeld where it was deployed on the left wing under the command of Lieutenant-General von Spörcken. On October 10, the regiment fought in the Battle of Lutterberg where it was deployed in the first line of the centre. It took its winter-quarters in Fürstenau.

In March 1759, the regiment took part in an incursion in Thuringia against the Reichsarmee. It was then attached to the Allied army of Ferdinand of Brunswick, in Linstrow's Brigade in the second line of the infantry centre. On April 13, it took part in the Battle of Bergen where it formed part of the second column under the Prince von Ysenburg, on the left wing of the Anglo-Allied army. Prinz Ysenburg, who had been a rallying point for Hessian resistance against the French, fell leading repeated assaults up a steep slope against the abattis surrounding the village. The French units in Bergen were strengthened by a reserve who blunted these repeated attacks. After repeated attempts to storm the village of Bergen, the Hanoverian and Hessian troops withdrew. In June, the regiment was part of Imhoff's Corps operating in Hesse. On July 30, Gilsa marched from the Allied camp near Minden at the head of 3 bns, including this regiment, to take post at Lübbecke to maintain communication with the Hereditary Prince. On August 1, the regiment was present at the Battle of Minden where it was deployed in Gilsa's detachment at Lübbecke.

On July 10 1760, the regiment fought in the combat of Corbach where it formed part of the right column under Lieutenant-General Count von Kilmannsegg. Captain-Lieutenant Goveirerus was killed in this engagement.

On February 15 1761, the regiment took part in the Combat of Langensalza.

By May 23 1762, the regiment served with the main Allied army where it was attached to Lieutenant-General von Gilsa's Division. On June 24, it took part in the Battle of Wilhelmsthal. On July 23, it fought in the Combat of Lutterberg, covering the retreat of the Allied army after this coup-de-main. It then participated in the siege of Kassel where Captain von Monsbruch, Lieutenant Bode and Ensign Höpfner were wounded. 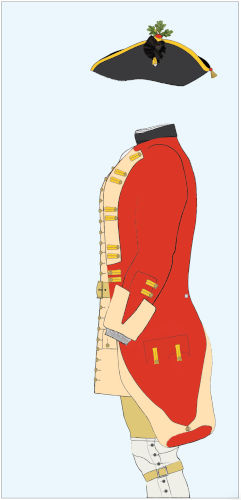 Officers had gold lining the cuffs and lapels, a black cockade hat, a gold gorget with the arms of Hanover in the centre and carried a yellow sash slung over the right shoulder. Sergeants wore straw gloves. Partizans were carried.

The drum pattern had hoops in alternating straw and red diagonal stripes, white drum cords over a brass drum with the Arms of Hanover in the centre. The belt was red laced white.

Regimental Colour: pale straw field; centre device consisting of a red pyramid with blue serpent, surmounted by a white scroll carrying the motto PER ARDUA VIRTUS; corner devices consisting of bursting grenades. Hereafter, we present an illustration from the Reitzenstein Sammlung, dating from circa 1761 (left) and the interpretation of Hannoverdidi (right).