The regiment was raised in 1697 from six regimental grenadier companies, and designated as Grenadierbataillon.

At the beginning of the War of the Spanish Succession, in 1702, the regiment was renamed Grenadierregiment. Oe of its battalion took part in the siege of Kaiserswerth. On November 15, 1703, it fought in the battle of Speyerbach where it suffered heavy casualties, losing all its officers. The regiment also fought at the battles of Schellenberg (July 2, 1704) Blenheim (August 13, 1704), Castiglione (September 8, 1706 ) and Malplaquet (September 11, 1709).

During the War of the Austrian Succession, the regiment remained in Hessen.

During the same war, the Commander-in-Chief of the regiment was:

During the same war, the successive Kommandeur assuming effective command of the regiment were:

In 1760, when the Hessian Army was reorganised, the regiment became known as the Zweite Garde and in 1763 Zweites Bataillon Garde.

In 1789, the regiment was amalgamated with Infanterie Regiment Nr. 14.

On March 28, 1756, George II informed the Houses of Parliament of Great Britain that the French Court was planning the invasion of Great Britain and that, consequently, he intended to requisition a body of Hessian troops and to use it as reinforcement of Great Britain. The same day, the contingent of the Hesse-Kassel Army started to assemble in Germany. It consisted of 8 regiments including the present regiment. From March 28 to April 20, the Hessian contingent marched towards Bremen. On May 2, it embarked aboard 48 British transports at Stade. On May 15, it landed at Southampton. From May 19 to 22, the Hessian contingent was transported to the region of Salisbury where it took its cantonments. By May 23, it had been quartered in Hampshire. From July 11 to 14, the Hessian contingent moved to its new encampment at Winchester. In December, it took its winter-quarters in the Counties of Chichester, Salisbury and Southampton.

From April 23 to 27, 1757, the Hessian contingent embarked aboard 43 British transports at Chatham to return to Germany. On May 1, the convoy sailed from Chatham. From May 11 to 16, the convoy gradually reached Stade after having suffered a severe tempest. By July, the regiment had joined the Allied Army assembled in Hanover under the command of the Duke of Cumberland to prevent the French invasion of Hanover. On July 24, the regiment took part in a small action at Lafferde. On July 26, it fought at the Battle of Hastenbeck where it was deployed in the first line of the centre.

During the first half of 1759, the regiment formed part of the Allied Army of Ferdinand of Brunswick. It was attached to Bose's Brigade in the first line of the infantry centre. From April 6 to 7, the regiment took part in the capture of the Fortress of Ulrichstein. A few days later, on April 13, it took part in the Battle of Bergen where it formed part of the third column under the Duke von Holstein-Gottorp. Along with Gilsa Infantry, and supported by some Allied cavalry units, it covered the right flank near Bad Vilbel clearing the wood of Saxons in support of the attack of the left flank on Bergen. In mid June, the regiment was part of Wutginau's Corps which had taken position at Büren in Westphalia. On August 1, the regiment took part in the Battle of Minden where it was deployed in the first line of the 7th column under Major-General von Einsiedel. On August 17, the regiment took part in the raid on Naumburg and, on August 28, in the raid on Wetter. On November 30, ittook part in the attack on Fulda where the Hereditary Prince of Brunswick surprised the Württemberger contingent in the service of France. It was attached to the Hereditary Prince's column. On December 9, it was part of the Allied relief corps sent to assist Frederick II in Saxony.

On July 10, 1760, the regiment was part of Lieutenant-General von Gilsa's Reserve at the Combat of Corbach. This reserve did not take part in the engagement. On the night of July 14, having intelligence that a French party (6 bns, Bercheny Hussards and some light troops) under General Glaubitz was on its way to Ziegenhain from Marburg, evidently with the object of disturbing his communications, Ferdinand detached the Hereditary Prince of Brunswick to take command of 6 bns (Behr (1 bn), Marschalk (1 bn), Mansbach (2 bns) and Hessian 2. Garde (2 bns)) which were lying at Fritzlar, and to attack Glaubitz whose forces had encamped at Vasbeck for the night. On the morning of July 15, the Hereditary Prince marched rapidly southward, being joined on the way at Zwesten (present-day Bad Zwesten) by Luckner's Hussars and by the 15th Light Horse (under Major Erskine), which had just arrived from Great Britain. On reaching the vicinity of Ziegenhain, he found that Glaubitz was encamped farther to the west, near the village of Emsdorf. His troops being exhausted by a long march, the Hereditary Prince halted for the night at Treysa. On July 16, he captured most of Glaubitz's detachment in the Engagement of Emsdorf. On July 30, it was at the combat of Weißenstein and, on August 10, at the combat of Sababurg. From September 30, it participated to the blockade of Wesel. On October 16, it fought in the Battle of Clostercamp.

On June 24 1762, the regiment took part in the Battle of Wilhelmsthal.

Hessian troops wore a uniform in the Prussian style including the grenadier and fusilier hat. Until 1750 the trousers were dark blue. The stock was red for the other ranks and white for officers.

It seems that, like the uniforms of the Hanoverian army, those of the Hessen-Kassel got simpler during the war. At the beginning of the conflict, there still were white lace around lapels and cuffs but the new uniform issued from the end of 1760 until April 1761 had no such laces. 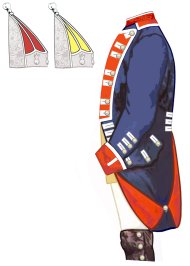 Troopers were armed with a sword (brass hilt) and a musket which was carried using a leather strap.

NCOs wore a Prussian style mitre cap similar to the one worn by privates (white metal front plate and headband and yellow sack) but with a red pompom. They also had silver lace (unknown pattern) and red stocks. They carried a black or dark brown Prussian style half-pike (partizan).

Officers wore a white stock and, as a signed of their commissioned rank, a silver gorget and a sash. The sash was of silver silk shot with red flecks .

Officers also had embroidered silver lace on lapels, waist, arms, on pockets (maybe 2 on each) and in the back. Officers wore tricornes with assumed straight silver lace instead of the 1760 zig-zag pattern. They carried a black or dark brown spontoon or a white stock.

By the Seven Years War the convention of wearing reversed colours had disappeared. Drummers now wore the same dark blue coat with white and red livery lace placed along the coat seams in seven inverted chevrons along the sleeves and around the “swallow nests” on the shoulder. Very much a copy of the Prussian style. They also wore a Prussian style mitre cap similar to the one worn by privates (white metal front plate and headband and yellow sack) but with a red/white pompom.

Drum rims believed to be yellow with diagonal red stripes.

From around April 1761, the uniforms of the 2nd, 3rd and 4th Garde were similar. 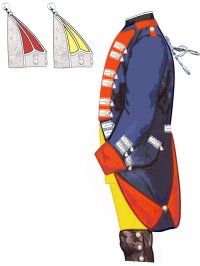 NCOs wore a Prussian style mitre cap similar to the one worn by privates (white metal front plate and headband and yellow sack) but with a red pompom. They also had silver band lace instead of the white laces of the troopers.

Officers had no lapels, (silver) bow lace, but not as rich as with the 1st Garde. Their tricorne had a broad zigzag lace without Lahne (sic - read Lohe? - flamed?). No plume on the tricorne. Black stocks and cockade with the pig-tail.

The Tambours also receive lapels just like the privates (i.e. none before?). The lace on the sleeves was a band lace of mixed white/red just like 1st Garde, but not so rich. They also wore a Prussian style mitre cap similar to the one worn by privates (white metal front plate and headband and yellow sack) but with a red/white pompom.

To the present day, a definitive reconstruction of the Hesse-Cassel colours during the Seven Years' War is non-existent. All existing publications are mostly speculative. The Leib (colonel) colour was probably white.