The exact date of creation of the regiment is unknown. It was formerly part of a regiment of Principality of Brunswick-Celle which remained independent from Hanover until 1705 so it was probably part of the four regiment created by the House of Celle in 1617 for the Thirty Years' War. In 1632, it probably was at the Battle of Lützen.

In 1666, the regiment probably took part in an engagement against the Swedes for the reconquest of Bremen.

In 1724, the regiment was subdivided in two distinct regiments. The first battalion forming Sebo Infantry and the second, Ranzow Infantry (the object of the present article).

In 1729, the regiment assembled near Lüneburg. In 1733, it had to march to Mecklenburg once more to quench troubles.

In 1738, the regiment was part of Hanoverian force sent to reclaim possession of the Castle of Steinhorst, occupied by the Danes.

In 1741, at the beginning of the War of the Austrian Succession, the regiment joined the army assembled at a camp near Nienburg. In 1743, it was part of the Reserve Corps encamped near Hanau on the Main. In 1745, it served on the Rhine. In February 1746, it went to Einbeck before being transferred to Brabant in the Austrian Netherlands. On October 11, it fought in the Battle of Rocoux where it suffered very heavy losses and was taken prisoners. It was soon exchanged. In the Autumn of 1747, it returned to Hanover.

In 1749, the regiment formed part of the garrison of Uelzen.

During the Seven Years War the regimental Chef were:

In May 1756, the regiment was part of the Hanoverian Contingent sent to reinforce Great Britain who feared a French invasion. On May 21, the contingent landed at Chatham. On May 22, the regiment marched to Maidstone. On August 4, it was transferred to Coxheath. It took up its winter-quarters in the region.

At the beginning of March 1757, the regiment was among the last Hanoverian battalions to disembark at Cuxhaven. It then returned to its garrison place. On July 26, during the French invasion of Hanover, the regiment fought in the Battle of Hastenbeck where it was deployed in the second line of the left wing. Its Chef was mortally wounded during the battle.

On May 26 1758, the regiment was with Ferdinand's main force in the camp of Nottuln. On May 31, it accompanied Ferdinand in his offensive on the west bank of the Rhine. On June 23, the regiment took part in the Battle of Krefeld where it was deployed in the second line of the left wing under the command of Lieutenant-General von Spörcken.

In June 1759, the regiment was part of the main Allied army under the command of Duke Ferdinand of Brunswick. On July 27 in the afternoon, the Hereditary Prince of Brunswick set off from Petershagen, near Minden, with 6 bns, including this regiment, and 8 dragoon sqns, totalling some 6,000 men, and marched south-westward on Lübbecke to threaten the French left flank and the supply line between Minden and Paderborn. On August 1, the regiment was part of the centre of the corps of the Hereditary Prince who attacked and defeated Brissac's French corps at the engagement of Gohfeld. It then took part in the pursuit of the French rearguard up to Einbeck, Northeim and Varlosen before rejoining the main army. In September, the regiment took part in the siege of the Citadel of Marburg who finally surrendered on September 11. On the night of December 22, during the blockade of Giessen, the regiment was attacked by a French detachment but managed to drive it back. In this action, the regiment lost Captain von Estorf and Lieutenant Helmold killed; and Captain von Quirer wounded. The regiment took up its winter-quarters in Heuchelheim.

For the campaign of 1760, the regiment served in the army of the Hereditary Prince of Brunswick. On July 10, the regiment was part of the Prince von Anhalt's Reserve at the Combat of Corbach. This reserve did not take part in the engagement. On the night of July 14, having intelligence that a French party (6 bns, Bercheny Hussards and some light troops) under General Glaubitz was on its way to Ziegenhain from Marburg, evidently with the object of disturbing his communications, Ferdinand detached the Hereditary Prince to take command of 6 bns (Behr (1 bn), Marschalk (1 bn), Mansbach (2 bns) and Hessian 2. Garde (2 bns)) which were lying at Fritzlar, and to attack Glaubitz whose forces had encamped at Vasbeck for the night. On the morning of July 15, the Hereditary Prince marched rapidly southward, being joined on his way at Zwesten (present-day Bad Zwesten) by Luckner Hussars and by the 15th Light Horse (under Major Erskine), which had just arrived from Great Britain. On reaching the vicinity of Ziegenhain, he found that Glaubitz was encamped farther to the west, near the village of Emsdorf. His troops being exhausted by a long march, the Hereditary Prince halted for the night at Treysa. On July 16 at 11:00 a.m., he posted the regiment in a hollow near Speckswinkel, 1.5 km before Erksdorf. The Allies captured most of Glaubitz's detachment in the Engagement of Emsdorf. In this combat, the regiment lost Captain-Lieutenant von Normann who was killed. In the autumn, the regiment accompanied the Hereditary in his unsuccessful siege of Wesel.

At the beginning of the campaign of 1761, this regiment was attached to Spörcken's Corps posted near Warburg. In June, this corps was threatened by Broglie's Army. On June 29 at 5:00 a.m., Broglie's army passed the Diemel, forcing Spörcken to abandon Warburg and to retreat in an attempt to effect a junction with the main body. During the march, the regiment formed part of the rearguard. Belzunce and Chabot caught up with Spörcken's rearguard, who was retiring to Willebadessen towards Hameln, and took 300 prisoners and 10 pieces. Finally, Spörcken's rearguard made a junction with his corps (approx. 13 infantry rgts and 5 cavalry rgts). On July 10, Spörcken finally established communication with the main Allied army when he reached Harsefeld (unidentified location). On July 16, the regiment was present at the Battle of Vellinghausen but was attached to Spörcken's detachment who remained at Herzfeld on the left bank of the Lippe and did not take part in the battle. On July 29, Spörcken's Corps finally effected a junction with the main Allied army. On August 5, the regiment took part in the combat of Stadtberg where the Allies were heavily cannonaded but managed to drive the French back.

From August 21 1762, the regiment took part in the siege of Kassel. On September 6, as part of a corps under Major-General Waldhausen, it crossed the Fulda and encamped at Ellenbach on the heights behind Sangershausen. On September 14, it returned to Kassel where it participated in the siege until the surrender of the place on November 1. During the siege, the regiment lost Captain-Lieutenant Goeben, Lieutenant Heine and Ensign Hildebrand killed, After the capture of Kassel, the regiment formed part of its garrison.

After the peace, the regiment assumed garrison duty in Uelzen and Lüneburg. 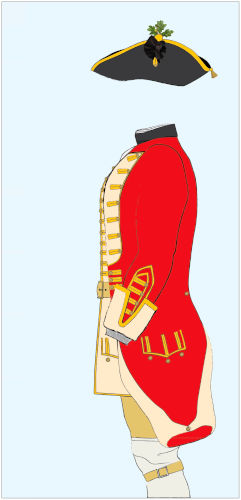 N.B.: all textual sources indicate orange as the distinctive colour but graphical sources show a rather pale orange (almost buff).

Regimental Flag: yellow field; centre device consisting of an armoured Roman with raised sword between two marble pillars which are connected by a chain on which dangle two laurel crowns and three laurel wreaths; the whole central scene surmounted by a scroll carrying the motto ANTIQUAE AVIDUS GLORIAE. Hereafter, we present an illustration from the Reitzenstein Sammlung, dating from circa 1761 (left) and the interpretation of Hannoverdidi (right).