In August 1756, the regiment formed part of the army left in East Prussia under Field-Marshal Lehwaldt to observe the Russian army.

In 1757, the regiment once more was part of Lehwaldt's Army assigned to the defence of East Prussia against a Russian invasion. On August 30, at the Battle of Gross-Jägersdorf, it was deployed in the first line of the cavalry right wing under the Duke of Holstein-Gottorp. The cavalry of the Prussian right wing then attacked the Cossacks deployed in front of the Russian left wing who feigned to retire, drawing the Prussian cavalry towards the 5 Russian infantry regiments who had deployed in line during the cavalry engagement. The Holstein-Gottorp Dragoons forced their way through them, took a battery of 8 guns and cut down all who opposed them. However, the Prussian cavalry of the right flank was unable to maintain the advantage gained during this initial engagement. Artillery was soon brought to bear upon them, obliging them to retire. During this battle, the regiment lost 5 men killed and 50 wounded.

In January 1758, the regiment was part of Lehwaldt's Army who proceeded to the invasion of Swedish Pomerania, bottling up the Swedes in Stralsund. On January 10, it was part of Holstein's Corps who advanced into Mecklenburg, levied considerable contributions and took possession of Wismar (January 27) and Rostock (February 6). About mid February, Holstein's Corps advanced into the Duchy of Lüneburg and finally made a junction with the Allied army of Ferdinand of Brunswick. On May 26, the regiment was part of the corps of the Prince of Holstein-Gottorp encamped at Dülmen. On May 31, this corps accompanied Ferdinand of Brunswick in his offensive on the west bank of the Rhine. On June 12, during the aborted attack on the French positions at Rheinberg, the regiment was in the Holstein-Gottorp (third) column of attack under Major-General von Brandemer. On June 23, the regiment took part in the Battle of Krefeld where it was deployed on the right wing under the command of the Erbprinz (hereditary prince) of Brunswick. Along with the Prussian Finckenstein Dragoons and supported by the Hessian Leib cavalry and Leib Dragoons, it fell on the rear of the French infantry. After a fierce fight, they chased the French infantry out of its entrenchments. During the battle, the regiment captured a standard and the kettle-drums of Royal-Roussillon Cavalerie. On September 29, the regiment was part of the isolated Allied observation corps under the command of Prince Holstein-Gottorp which escaped the French unsuccessful night attack on Bork.

During the first half of 1759, the regiment formed part of the Allied army of Ferdinand of Brunswick. It was attached to Mostyn’s Division in the first line of the cavalry right wing. On April 13, it took part in the Battle of Bergen where it formed part of the third column under the Duke of Holstein-Gottorp. In June, the regiment was still part of the main Allied army under the command of Ferdinand of Brunswick. On August 1, the regiment took part in the Battle of Minden where it was deployed in the first line of the 8th column under Lieutenant-General Duke of Holstein-Gottorp. It took part in the capture of a French battery near Malbergen and drove the Touraine and Rouergue infantry brigades out of their defensive positions, capturing the Comte de La Marche Infanterie, 2 colours and 10 guns. During this battle the regiment lost 67 men.

On Sunday August 3, 1760, when Frederick II resolved to march towards Silesia, the regiment formed the vanguard of the third column. On August 15, it was present at the Battle of Liegnitz but did not take part in combat. On September 17, it took part in the Combat of Hochgiersdorf where it was deployed in the second column under Lieutenant-General Count zu Wied.

In August 1761, the regiment formed part of the Prussian army under the command of King Frederick II encamped in the entrenched camp of Bunzelwitz (present-day Bolesławice) near Schweidnitz in Lower Silesia. In September, the regiment took part in a raid in Greater Poland against Russian magazines. On September 15, it was at the Engagement of Gostyn. At the end of September, it was transferred to Pomerania to relieve the besieged Fortress of Colberg. On October 22, it fought in the Combat of Gollnow; and on December 12, in the Combat of Spie. At the end of December, the regiment was attached to the corps of Generals Schenckendorff and Platen which marched by Schwedt and Berlin and took up its winter-quarters in Saxony. 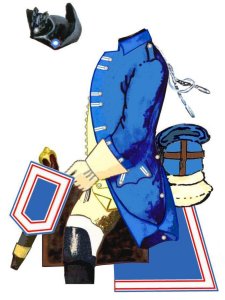 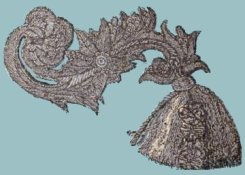 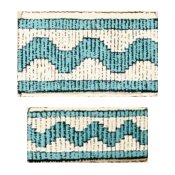 Drummers of the regiments wore the same uniform as the troopers but without braided loops and ornamented on the seams, edges, pocket flaps and cuffs with a white lace decorated with 2 outer blue bands and a central blue zigzag.

Standards were made of damask. They were swallow-tailed and measured some 50 cm along the pole, 65 cm from the pole to the extremity of a point and 50 cm from the pole to the centre of the indentation. The cords and knots were of silver threads. The pole of the standard was a yellow tournament lance reinforced with iron hinges. The golden spearhead wore the crowned monogram of Frédéric (FR).