The Iowa people (in fact Bah-Kho-Je people) are a Siouan-speaking and semi-nomadic group of Native Americans. They inhabited a region in present-day Iowa.

By the 1700s, the Iowa people lived in southwestern Minnesota.

By 1760, the Iowa numbered some 1,100 people. They traded with the French and local tribes.

In 1836, the Iowa people was assigned a reservation in Kansas and Nebraska. Some of them later moved to Oklahoma.

In 1757, a group of 10 Iowa warriors took part in the French expedition against Fort William Henry. 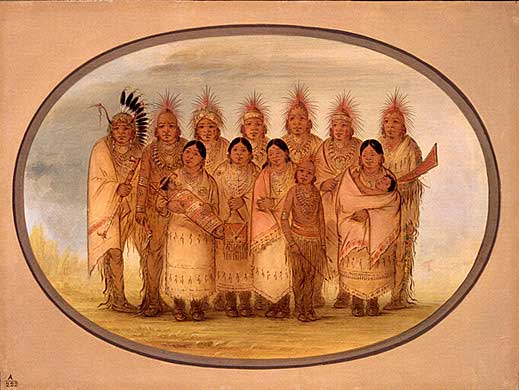 Iowa men traditionally shaved their heads and decorated them with deer hide. We have been unable to find additional characteristics about the dress of this Native American people that would distinguish them from other peoples. If you can suggest sources documenting such characteristics, please do not hesitate to contact us with your suggestions.