Sometime between 1450 and 1660, five Iroquoian-speaking Native American people (from east to west: Mohawk, Oneida, Onondaga, Cayuga, Seneca) formed a confederacy, known to the French as the “Iroquois Confederacy” and to the English as the “Five Nations.” This confederacy initially occupied a territory extending in large areas of present-day New York State up to the Saint-Laurent River near Montréal, west of the Hudson River, and south into northwestern Pennsylvania.

The Iroquois people designate themselves as Haudenosaunee (People of the Longhouse). The origin of the name “Iroquois” is unknown, even though several competing theories have been put forward.

During their expansion along the lower course of the Saint-Laurent River, the Iroquois clashed with several Algonquian tribes. As noted above, their territory extended up that river down to Montréal.

In 1609 and 1610, the French, who had recently established a trading post at Québec, participated in expeditions of their Native American allies against the Mohawk people in the area of Lake Champlain. These expeditions mark the beginning of the so-called “Beaver War,” because the main reason for the war was the competition for the fur trade.

In 1628, the Iroquois defeated the Mahican people to establish a monopoly of the fur trade with the Dutch of Fort Orange (present-day Albany/NY). In 1638, they attacked the Wenro people, whose territory was located west of the Seneca Nation. By 1640, there were almost no beavers left in their territory. In 1645, they made peace with the Hurons , the Algonquins and the French. In 1649, the Iroquois (mostly of Senecas and Mohawks) destroyed the Huron Confederacy. In 1650, they attacked the Petun people and the Neutral Nations inhabiting the north shore of Lakes Erie and Ontario. In 1651 and 1652, they turned their attention to the south and attacked the Susquehannock people, meeting with strong resistance. In 1653, the confederacy made peace with the French. From 1654 to 1657, they conducted war against the Erie people. In 1658, in the middle of an epidemic of smallpox, hostilities with Nouvelle-France resumed. From 1658, the Iroquois were once more at war with the Susquehannock people, suffering a severe defeat in 1663. Meanwhile, in 1661 and 1662, they raided the territory of the Abenaki people. In 1664, an Oneida party attacked the allies of the Susquehannocks on the Chesapeake Bay. In 1665, three of the Five Nations made peace with the French. In 1666, the French launched a punitive expedition against the Mohawks and Oneidas. In 1667, these two nations finally concluded peace with the French. Catholic converts gradually relocate to Sault Saint-Louis (present-day Kahnawake) near Montréal.

Around 1670, with their hands free, the Iroquois drove the Manahoac people out of its territory in the the northern Virginia Piedmont. In 1672, a new war erupted against the Susquehannock people. In 1677, they finally adopted the majority of this people into their nations.

In 1676, in exchange for muskets, the Iroquois assisted the English in their war against the Wampanoag people. In 1677, a formal alliance was established between the English and the “Five Nations.” The Iroquois Confederacy even established seven villages on the northern shores of Lake Ontario, but they were abandoned in 1701.

At the end of these wars, the territory of the Iroquois Confederacy extended from the Mississippi River to the Atlantic Ocean; and from the Saint-Laurent River to the Chesapeake Bay.

In 1684, the French launched an unsuccessful expedition against the Senecas, who had been attacking French and Algonquian fur traders in the Mississippi River valley. In 1687, the French launched a new punitive expedition against the Iroquois, capturing by treachery the 50 hereditary sachems and sending them to France to be used as galley slaves. The French then ravaged the territory of the Seneca Nation. In 1689, the Iroquois retaliated by burning down the village of Lachine near Montréal. In 1690, the French burned down three Mohawk villages. In 1696, Governor Frontenac led an expedition against the Oneidas and Onondagas. Meanwhile Algonquian nations reconquered territories north of Lake Erie and part of the Ohio Valley.

During the Nine Years’ War (1688-1697), known in the English colonies of North America as the “King William's War,” the Iroquois were allied with the English.

In 1701, the Iroquois ceded large part of their territory north of the Ohio to the English and signed peace with France. During the War of the Spanish Succession (1701-1713), known in the British colonies of North America as the “Queen Anne's War,” the “Five Nations” remained neutral.

Around 1722, the Tuscarora, an Iroquoian people who had been chased from the Carolinas by English settlers, joined the confederacy as its sixth member. From then on, the confederacy became known as the “Six Nations.”

In 1744, the Iroquois sold all their remaining claims in the Shenandoah Valley to the colony of Virginia. In 1745, Sir William Johnson was appointed commissary of the Province of New York for Indian affairs. In 1748, Johnson was influential in enlisting and equipping the “Six Nations” for participation in the warfare with French Canada. He was placed in command of a line of outposts on the New York frontier. The Peace of Aix-la-Chapelle put a stop to offensive operations, which he had begun.

By the time of the Seven Years’ War, Iroquois power extended into present-day Canada, westward along the Great Lakes and down both sides of the Allegheny mountains into present-day Virginia and Kentucky and into the Ohio Valley. The “Six Nations” initially sided with Great Britain.

On September 8, 1755, a party of Mohawk warriors (approx. 250 men) led by Chief Peter Hendricks took part in the Combat of Lake George, where their leader was killed. After this engagement, the “Six Nations” declared themselves neutral, although the Mohawks continued to take an active part in military operations.

In July 1758, 400 Iroquois warriors (probably Mohawks) took part in the British expedition against Carillon; while another party joined the British expedition against Fort Niagara and fought in the engagement at La Belle Famille. Later the same year, after the fall of Louisbourg and Fort Frontenac, the “Six Nations” finally joined the British against the French. In October of the same year, the Iroquois forced the Lenape and Shawnee who had been fighting for the French to declare neutrality.

In July 1759, Iroquois warriors took part in the British expedition against Fort Niagara.

In 1760, Iroquois warriors assisted General Jeffrey Amherst during his advance on Montréal, which surrendered in September.

In 1761, a party of Mohawk warriors took part in the British expedition against the Cherokee Indians.

The bodies and faces of Iroquois men were heavily tattooed with geometric designs and their noses and ears were pieced with rings made up of wampum or silver. On the warpath, the faces and bodies of the warriors were painted half red, half black.

Men usually shaved most of their hair, leaving only a tuft of hair in the centre. The Mohawks had one or two long lock hanging down, the rest of the head was shaven with the exception of a streak of hair from the forehead to the neck. 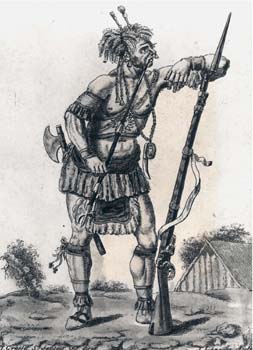 Headdress: a cap called the gustoweh made of either buckskin or cloth tied to wood splints and decorated with feathers was often worn by men. Each nation could be identified by the number and positioning:

Breechcloth: a leather belt with a rectangle of red or blue duffel cloth pulled under it, front and rear. Leather could also be used in place of duffel cloth.

Moccasins: deer-skin moccasins rising several cm above the ankle. They were decorated with porcupine quills or beads in various patterns.

Ammunition pouch: buckskin pouch with straps over the shoulder .

Belts carrying a powder horn and a tomahawk.

A quilled case carrying a knife was worn around the neck.

During colder months, warriors wore leggings in addition to the items of the summer dress:

Bows and arrows with flint tips were the traditional weapons of Iroquois warriors. Quivers were made from corn husks. Wooden shields and war clubs were also used. By mid XVIIIth century metal knives and hatchets were common, as well as tomahawks with iron blades.

By the 1630s, most Iroquois warriors had European firearms which had been traded with the Dutch.