This regiment of dragoons was initially raised in 1706 in the Electorate of Mainz by Franz Lothar count von Schönborn. On April 16 1710, the regiment was incorporated into the Austrian army.

From 1756, when the hereditary prince of Modena became owner of the regiment, it was desiganted as “Jung-Modena” to distinguish it from the Modena Cuirassiers.

In 1760, the regiment was transformed into Chevauxleger regiment. However, it was soon reverted to a dragoon regiment in 1763.

The regiment was disbanded in 1801.

In June 1756, at the beginning of the Seven Years' War, the regiment was stationed in Lombardy and counted about 600 men and 600 horses.

In April 1758, a detachment of the regiment was captured at the siegre of Schweidnitz while defending the fortress against a Prussian army. The rest of the regiment took part to the siege of Neisse.

In 1760, the regiment served with the Reichsarmee in Saxony as a Chevauxleger unit but did not take part in any major action.

In 1761, the regiment served with the Reichsarmee in Saxony once more, but did not take part in any major action.

In 1762, detachment of the regiment took part in the action at Kammerndorf. 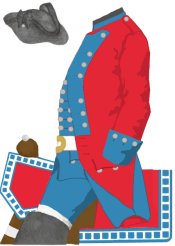 Regiment (variant 1): swallow tailed pennant; pink field with silver and white silk embroideries; wide border in silver embroideries and silver fringe. On one side there was an eagle

Ordinair-standarte (variant 1): Swallow tailed with silver fringes and silver embroideries; pink field. On one side there was an eagle