The regiment was raised in 1665. It garrisoned Fallersleben, Gifhorn, Burgdorf and Wittengen.

On July 26 1757, during the French invasion of Hanover, the regiment took part in the battle of Hastenbeck where it was deployed in the first line of the right wing under the command of General Block.

On May 26 1758, the regiment was with Ferdinand's main force in the camp of Nottuln. On May 31, it accompanied Ferdinand in his offensive on the west bank of the Rhine. On June 23, the regiment took part in the battle of Krefeld where it was deployed in the centre in Lieutenant-general Oberg's Brigade (6 battalions) which, at the opening of the battle was ordered to make diversion towards Sankt-Tönis. In December 1758, when the Allied army took its winter quarters in Westphalia, the regiment was quartered in Tillegette, Walbech and Alberstock.

In June 1759, the regiment was part of the main Allied army under the command of the Duke Ferdinand of Brunswick. On August 1, the regiment took part in the battle of Minden where it was deployed in the first line of the 4th column in Major-general von Scheele's Brigade.

On July 10 1760, the regiment took part in the combat of Corbach where it was attached to the right column of the main corps under Lieutenant-general Count von Kilmannsegg. On October 16, at the battle of Clostercamp, the regiment along with the 87th Keith's Highlanders, the 23rd Royal Welsh Fusiliers (Huske) and the 20th Kingsley's Foot assaulted the monastery at Kamp.

On June 24 1762, the regiment took part in the battle of Wilhelmsthal where it was attached to Granby's Corps forming the left wing towards Dörnberg. 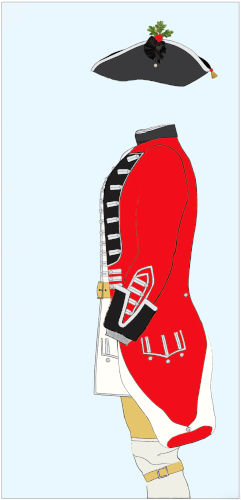 Regimental Flag: Red field, cavalier in the centre, fortress with rockets issuing from the battlements, rophy of flags below, white scroll, motto above IMPAVIDUM FERIENT RUINE. Hereafter, we present an illustration from the Reitzenstein Sammlung, dating from circa 1761 (left) and the interpretation of Hannoverdidi (right).