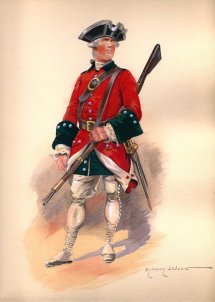 This Irish regiment was raised on October 1 1744.

During the War of the Austrian Succession, the regiment served in Flanders in 1745 and 1748.

During the Seven Years' War, the regiment ranked 109th and was under the command of:

On July 15 1756, an ordonnance established that the regiment should count 525 men in 13 companies: 12 companies of fusiliers (each of 40 men) and 1 company of grenadiers of 45 men. A new ordonnance, dated November 10, stipulated that the regiment would be sent to India and instructed to increase its effective strength to 1,080 men (excluding officers) organised as follows:

N.B.: even though the entire regiment was supposed to be sent to India, sources describing the campaigns in India mention only the second battalion.

On March 6 1757, the 2nd battalion of the regiment left Brest on board a squadron under the command of Admiral d'Aché to reinforce the French posts in India. The fleet pursued by British men-of-war loitered on the voyage to Mauritius. It then took three months on his passage to yhe Coast of Coromandel.

In 1759, the 2nd battalion took part in the operations on the Coast of Coromandel. At the beginning of August, it was in garrison at Chittapett (present-day Chetpet). It broke into open mutiny and marched out of the fort with the avowed intention of joining the British. Their officers followed them, and by promises to discharge the arrears of their pay, now several months overdue, succeeded in conciliating most of them; but 60 men persisted in their resolution and deliberately carried it out.

On January 22 1760, the battalion took part in the Battle of Wandewash. Throughout the year it was involved in the operations on the Coast of Coromandel and took part in the defence of Pondicherry (present-day Puducherry). On September 4, during the blockade of Pondicherry by a British amphibious force, Lally made an attack on the British camp which was repulsed after one redoubt had been taken by the French, 1 gun captured, 2 other spiked and a British officer and 3 men had been taken prisoners. Lally Infanterie was particularly distinguished in this occasion, losing 8 sergeants and 25 privates killed.

On January 15 1761, when Pondicherry surrendered, the regiment became prisoners of war. 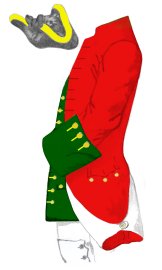 Officers wore a uniform similar to those of the privates with gold buttonholes on the cuffs.

Drummers wore uniforms similar to those of the privates but with yellow laces on the cuffs and arms of the coat.

As per the manuscript Troupes du Roi, Infanterie française et étrangère, année 1757, the colours of the regiment were as follows:

Ordonnance colours: red and light green opposed cantons; centre device consisting of a golden Irish harp surmounted by a golden crown with the motto In Hoc Signo Vinces; 1 gold crown in each canton.