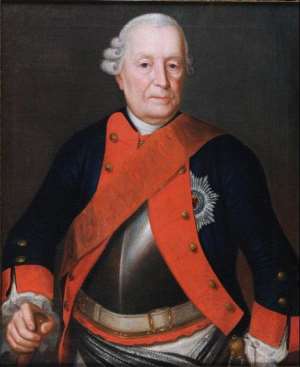 Johann von Lehwaldt was of an old noble family originating from Lusatia. His mother, Marie Esther, came from the old Prussian family of the Barons von der Trenck.

During the War of the Spanish Succession, in September 1702, Lehwaldt experienced his trial by fire in the siege of Venlo. On August 13 1704, his battalion fought in the Battle of Blenheim. On September 16, Lehwaldt was promoted to ensign. From September 29 to October 6, he participated in the siege of Hagenau.

On July 30 1722, Lieutenant-Colonel Lehwaldt was appointed commander of Hesse-Kassel Infantry.

On August 17 1738, Lehwaldt was appointed Chef of the former Jung-Kleist Infantry.

On the eve of the War of the Austrian Succession, on July 30 1740, Lehwaldt was promoted to major-general. In 1742, he took part in the Battle of Chotusitz and was later awarded a Pour le Mérite. On February 4 1744, he received the Order of the Black Eagle. On May 14 1744, he was promoted to lieutenant-general (retroactively to October 22 1743). On February 14 1745, Lehwaldt defeated Wallis' Austrian forces near Habelschwerdt. He also took part in the battles of Hohenfriedeberg and Kesselsdorf. On May 29 1747, Lehwaldt was promoted to general of infantry. On July 18 1748, he was appointed governor of East Prussia.

On December 22 1751, Lehwaldt was promoted to Field-Marshal. Frederick II also awarded him a diamond-covered portrait of the king on a blue band. Wilhelm Dietrich von Buddenbrock and Friedrich Wilhelm von Dossow were the only other recipients of this medallion.

During the Winter of 1756-57, Frederick sent Field-Marshal Lehwaldt with a large detachment to East Prussia and the Baltic region to guard against a potential Russian invasion. After assembling the West-Prussian militias and merging them with his regulars, Lehwaldt had some 30,000 men for the task.

In June 1757, Lehwaldt assembled his army and advanced to Insterburg (present-day, Tschernjachowsk in Russia), with a corps farther on towards Memel (present-day, Klaipeda in Lithuania) to observe the movements of the Russian army. On July 14, Lehwaldt quit his camp at Insterburg and encamped in the neighbourhood of Wehlau (present-day, Znamensk in Russia) to cover Königsberg. On August 29, Lehwaldt left his camp at Wehlau with about 25,000 men and advanced to attack the Russian army (about 80,000 men). He encamped at Gross-Jägesdorf not far from the Russian camp. Lehwaldt tried to reconnoitre the Russian positions but obtained flawed intelligence which led him to attack the Russian centre when he thought that he was advancing against their left wing. On August 30, Lehwaldt boldly attacked the Russians at Gross-Jägersdorf but was defeated and forced to retreat to his camp at Wehlau. A few days later, Lehwaldt lifted camp and moved to Paterswalde (present-day, Bolshaya Polyana in Russia). On September 13, the Russians remaining idle for a while began their retreat from East Prussia heading for Russia through Lithuania. The small Prussian army under Lehwaldt prudently followed the retreating Russians from a distance until they returned to Poland. On October 6, when Frederick realised that the Russian Army was in full retreat towards Poland, he sent order to Lehwaldt to redirect his efforts against the Swedes in Pomerania. On October 17, Lehwaldt, who was now at Tilsitt (present-day Sovetsk in Russia), received Frederick's order. Lehwaldt left two battalions to guard Königsberg (present-day Kaliningrad) and Pillau (present-day Baltiysk), deployed a cavalry cordon along the Memel and immediately marched towards Pomerania with a force of 24 battalions and 50 squadrons (about 25,000 men). On his way, Lehwaldt left 2 garrison battalions, 80 hussars and some garrison artillery in Prussia. On November 22, the head of Lehwaldt's column reached Stettin. Between November 28 and December 3, Lehwaldt's covering force took position along the Peene River between Anklam and Demmin. Lehwaldt recovered most of Prussian-Pomerania.

On January 2 1758, Lehwaldt crossed the Peene at the head of a small Prussian army and advanced into Swedish-Pomerania. On January 4, Anklam capitulated. By January 6, Lehwaldt had completely bottled up the Swedes in Stralsund and Rügen Island. A small Swedish force also remained in the entrenchments of Peenemünde. Lehwaldt's army wintered in Swedish-Pomerania, blockading Stralsund. At the beginning of March, unsatisfied by the poor results obtained by Lehwaldt, Frederick replaced him by General Count zu Dohna.

In 1759, Lehwaldt became governor of Berlin.

On October 3 1760, Lehwaldt, then governor of Berlin. Repulsed a first attempt by a Russian force to capture Berlin. However, on October 9, with the arrival of an Austrian Corps, he was forced to capitulate in front of this much large Austro-Russian force. advanced against the city, and captured and looted it.

In 1762, when Russia ceded back East Prussia, Lehwaldt became governor of the province.

In 1768, Lehwaldt died in Königsberg.

The section on Lehwaldt's career between 1756 and 1762 is mostly derived from our articles depicting the various campaigns, battles and sieges.