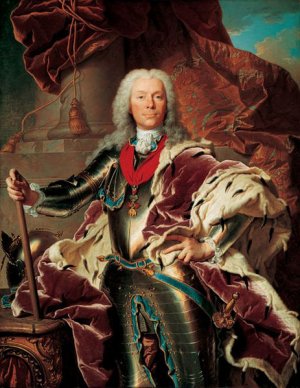 In 1704, his father was killed as an Imperial Field-Marshal. His mother had him educated in the Carolinium in Prague.

In 1717, Liechtenstein took part in the campaign against the Turks where he intially served as captain at Belgrad.

In 1718, Liechtenstein was promoted to lieutenant-colonel.

During the following years of peace, Liechtenstein made military studies.

On 1723, at the age of 19, Liechtenstein joined the Wehlen Dragoons.

By 1733, at the beginning of the War of the Polish Succession, Liechtenstein had already reached the rank of Feldwachtmeister (GFWM). In 1734, Liechtenstein was promoted to Feldmarschallieutenant (FML). The same year, he fought in the campaign on the Rhine and then became emissary in Berlin.

In the following years, Liechtenstein managed to convince Prussia to sign an alliance with the emperor. During his sojourn in Berlin, he established good relations with Crown-Prince Frederick.

After the Peace of Vienna, Liechtenstein became ambassador at the Court of Versailles, a function that he would hold from December 23 1737 to August 16 1741.

In 1740, Liechtenstein's service as ambassador earned him the Knight's Cross of the Order of the Golden Fleece. He would later, on behalf of the imperial family, undertake occasional diplomatic missions.

In 1741, at the outbreak of the War of the Austrian Succession, Liechtenstein became General of Cavalry and assumed an important command. On May 17 1742, he fought in the Battle of Chotusitz, where he led the cavalry of the right wing, and was almost cut down. The Prussians had used 82 cannon in this action and Liechtenstein recognized that their artillery was superior to that of the Austrians. In order to improve the Austrian artillery, he drew up a memorandum, together with gunnery experts, which he presented to Empress Maria Theresa; she approved all his suggestions.

In 1744, Maria Theresa appointed Liechtenstein general director of the entire artillery forces of the crown. He worked tirelessly in this office and laid the foundations of all future improvements in the Austrian artillery. His services were all the greater, as when state funding ran low, he invested his own money to finance the work.

In the Autumn of 1745, after his promotion to Feldmarschall (FM), Liechtenstein was appointed commander-in-chief of the army operating in Italy.

In the campaign of 1746, Liechtenstein reconquered Milan and, on June 16, won the Battle of Piacenza against a Franco-Spanish Army.

In 1748, after the death of Johann Karl Fürst Liechtenstein, Joseph Wenzel Liechtenstein inherited the family fortune and used much of it to finance his artillery research work. It is notable that Liechtenstein called upon several foreigners to help improve the artillery of Austria, just as Peter the Great of Russia had earlier used Austrian officers to bring the Russian artillery up to date. These foreigners included the Luxemburger Johann Theodor Rouvroy (the Fire Devil), the Dane Alvson, the Prussian Schröder, the Italian Guasco, the Swiss Tischler, and the famous Gribeauval, from French service. These men worked together with certain Austrian gunners of equal talents, such as the two Feuerstein brothers and Generals Feldern and Fischer.

Liechtenstein made a special catch with the Swiss carpenter, Jacquet, who, despite having no technical training, had a knack, bordering upon genius, when it came to devising solutions to mechanical problems. This man improved all the machines in the artillery foundry in Ebergassing and introduced several new ones. Some quote him as being the inventor of the horizontal gun barrel boring machine, while others attribute this to the Geneva blacksmith Maritz.

One of Liechtenstein's main aims was to improve the training of the artillery; to this end he instituted an annual training camp at Moldauthein (present-day Týn nad Vltavou), near Budweiss, during which all aspects of firing drill, target practice, mortars, earthworks, laboratory processes and experiments were thoroughly practised. For this exercise, he donated 50,000 Guilders each year from his own funds.

Liechtenstein introduced a new generation of field-pieces, howitzers and mortars of various calibres.

In 1751, Liechtenstein became ambassador in Brussels.

In 1753, Liechtenstein was appointed Commander-General of Hungary. However, progressive infirmity forced him to resign his command and to leave active military service.

Liechtenstein's new pieces played such an important role in the campaigns of the Seven Years' War that they remained, with minor improvements, the standard equipment of the Austrian artillery for more than a hundred years. During the Seven Years' War, the number of artillery pieces of the Austrian Army was increased from 202 in 1756 to 580 in 1762.

“...it was not the enemy soldiers but their artillery, over 250 well-positioned cannon, who forced his men to retreat...”

In 1760, Liechtenstein became governor general of Parma for Archduke Joseph Isabella von Parma. He later asked for the hand of the Spanish Infanta Maria Ludovica for Archduke Leopold.

In 1763, Liechtenstein was in Frankfurt, as ambassador of the Court of Vienna, on the occasion of the election and coronation of Archduke Joseph as emperor.

Liechtenstein then withdrew into a circle of scholars and artists and died on February 10 1772 in Vienna, aged 76.

This article incorporates text from the following book which is now in the public domain:

Digby Smith for the translation of Dollaczek's text. Harald Skala for additional information