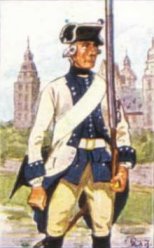 Uniform in 1758 - Source: Frédéric Aubert from a template made by Richard Couture.