The regiment was created on October 4 1676 as “Barbezieres”. It then belonged to the House of Cassagnet de Tilladet. On December 12 1724, it became the property of the House of Condé till the death of Louis Henri, Duc de Bourbon on February 21 1740. After various colonels, the Marquis de Marboeuf acquired the regiment on July 11 1755. In November 1761, the ownership of the regiment passed to the House of Moreton de Chabrillan.

During the War of the Polish Succession, in 1733 and 1734, the regiment served with the Army of the Rhine and then went to Stenay.

During the War of the Austrian Succession, the regiment took part in the invasion of Bohemia in 1741. It was later transferred to Flanders where it campaigned till 1748.

By August 1 1757, the 4 squadrons of the regiment were stationed at Guingamp in Bretagne. Two squadrons then remained in France to guard the Coasts of Bretagne while the two others were sent to Haguenau and later joined the French army in Germany.

On September 11 1758, the two squadrons operating in Bretagne took part in the Combat of Saint-Cast.

In 1759, the regiment was re-united at Vienne (France) on the banks of the Rhône. The same year, it was sent back to the Coasts of Bretagne.

In 1760, two squadrons were sent to Germany once more and remained there till the end of the war. 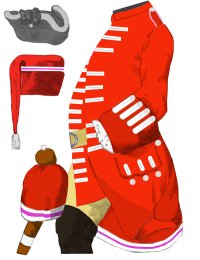 Throughout the war the French dragoon uniform seems to have evolved significantly. Our only primary sources for the uniform at the start of the conflict are the Etat Général des Troupes Françoises of 1753. The first primary pictorial evidence comes from Raspe in 1761. Here we present various interpretations of the evolution of the uniform.

From 1753 to 1761, drummers of the regiment wore uniforms at the livery of the House of Marboeuf which is unfortunately unknown. From 1761, they wore the livery of the House of Moreton de Chabrillan. As per a watercolour dated from 1748 in the collection of the prince de la Moskova and described J. Belaubre (N°6/1957 S.C.F.H.) from a manuscript of the Weimar Library (Cabinet des Estampes):

Coat without collar fasted by 6 silver buttons, green cuffs and turnbacks. White braid decorated with a green waved braid and green speckles in the trough of each “wave”. This braid was laid-out in widely spaced vertical bands on the front of the coat down to the belt, on the seams of the sleeves, and on the edges of the cuffs, turnbacks and pockets. Green waistcoat edged with the same braid. Green breeches. White cravate, black tricorne laced gold and bordered with white plumes with a black cockade. Red saddle cloth bordered with the same braid. Trumpets had red aprons fringed in gold embroidered with the golden crowned arms with a scroll beneath bearing an unreadable motto. 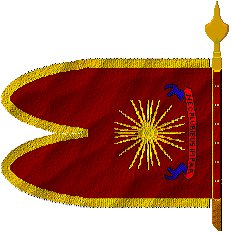 This article is mostly a translation Jean-Louis Vial's article “Marboeuf Dragons” published on his website Nec Pluribus Impar. The article also incorporates texts from the following books which are now in the public domain::