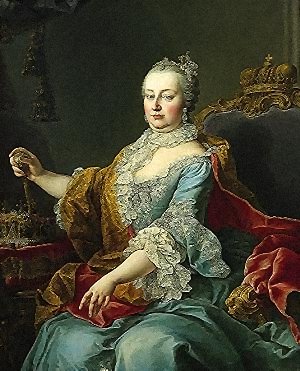 On February 12 1736, Maria Theresa was married to her cousin Francis, then Duke of Lorraine. France was opposed to the integration of the Duchy of Lorraine into the domain of the Habsburg and Francis had to exchange his Duchy for the Grand Duchy of Tuscany. Five sons and eleven daughters were born of this marriage.

On October 20 1740, when her father died, Maria Theresa was proclaimed Archduchess of Austria and Queen of Hungary. However, her inheritance of the Habsburg territories was immediately contested. Frederick II of Prussia invaded Silesia while Bavaria formed an alliance with France against Austria. This was the beginning of what would be known as the War of the Austrian Succession.

In 1741, at the legislative assembly of Pressburg, Maria Theresa appealed with passionate eloquence to the Hungarian nobles to obtain their support in her struggle against Frederick II of Prussia.

In 1742, Maria Theresa signed the Peace of Berlin with Prussia to have a free hand against Bavaria and France. However, Frederick II soon renewed the war. Finally, Austria ceded Silesia to Prussia in 1745, ending the conflict with Frederick II. The war continued against France until 1748 when the Peace of Aix-la-Chapelle was signed.

In 1745, Maria Theresa asserted the title of Königin von Dalmatien, Croatien und Slavonien (queen of Dalmatia, Croatia and Slavonia) even though Dalmatia would remain under Venetian suzerainty until the 1790s.

After the war, Maria Theresa decided to greatly improve the Austrian Army while actively seeking alliances with France and Russia. She was still planning to recover Silesia in a subsequent war. The intense diplomatic activities of Austria finally led to the reversal of alliances. Austria abandoned her long lasting alliance with Great Britain to forge a new alliance with France and Russia against Prussia.

War broke out in 1756. After seven years of conflict and countless campaigns and battles, Austria was left financially exhausted while Silesia still remained in the grip of Frederick II of Prussia.

For the rest of her reign, Maria Theresa became a resolute advocate of peace. In her internal government she showed herself anxious to promote the prosperity of her people, and to give more unity to an administration made up by the juxtaposition of many states and races with different characters and constitutions. However, she was resolutely absolutist. She suspended the meetings of the estates in most parts of her dominions. She did not give her consent even to the suppression of torture in legal procedure without hesitation, lest the authority of the law should be weakened.

In her private life Maria Theresa was equally the servant of the state. She married her daughters in the interest of Austria, and taught them not to forget their people and their father's house. In the case of Marie Antoinette, who married the Dauphin, afterwards Louis XVI, she gave an extraordinary proof of her readiness to subordinate everything to the reason of state.

On May 13 1779, the signing of the Peace of Teschen, which averted a great war with Prussia, was the last great act of her reign.

In the autumn of 1780, Maria Theresa developed an illness that was to prove fatal. She died on November 28 of the same year.