At the end of the 17th century, a Leibgarde zu Pferde was raised and disbanded in May 1702.

On August 24, 1705, Colonel Waldemar Gustav von Wedel became Chef of the Krassow Dragoons. After his death on September 4, 1708, Duke Frederic William made himself owner of the regiment, which was now designated as Leibregiment (zu Pferde).

In 1719, after the Reichsexekution against Duke Carl Leopold, most of the Mecklenburg-Schwerin troops were sent to Russia. But the duke was able to save a little part of his military forces, including cavalry, at the fortress of Dömitz. This cavalry force was not strong, a muster roll of the Hochfürstl. Mecklenburgischen Leib Regiment zu Pferde from November 26, 1727 mentioned only 113 men, more precisely:

In 1747, Duke Christian II. Ludwig ordered a reinforcement of his military and in 1748 a new Leibgarde zu Pferde was raised with a single company of 60 men. In 1756, its strength amounted to 36 troopers and some unmounted men. The unit was trained after the drill book of the Württemberg Garde du Corps: "Exerzierreglement von seiner hochfürstlichen Durchlaucht zu Württenberg Eskadron Guarde du Corps."

During the Seven Years' War, the successive commanders of the unit were:

After the Seven Years’ War, the regiment was disbanded, only the first squadron remained as Leibgarde zu Pferd. In 1810 the remnants of the Leibgarde zu Pferd were amalgamated with the 4th Battalion of the Mecklenburg Kontingentsregiment to form the Grenadier-Gardebataillon.

Towards the middle of the Seven Years’ War, Duke Frederic I. reinforced his military. In 1760 the Leibgarde zu Pferd was augmented to 230 men in 4 companies and renamed Leib-Regiment zu Pferde.

Until 1760, as Leibgarde zu Pferde, the uniform was kornblau (probably kornblumenblau = cornflower blue), no further details are known.

In 1760, as Leib-Regiment zu Pferde, the regiment probably adopted an almost identical copy of the uniform of the Württemberg Garde du Corps.

The waistcoat was richly decorated with gold lace.

Officers wore a golden sash with a red and a blue stripes around the waist.

The unit had only a Leibstandarte, which still exists in a private collection.

Leibstandarte: white silk field with the great coat of arms flanked by a black bull (left) and a golden griffin (right), standing on golden rococo-style ornaments and surmounted by a golden ducal crown. The standard had silver fringes and was approximately 75 cm by 75 cm. 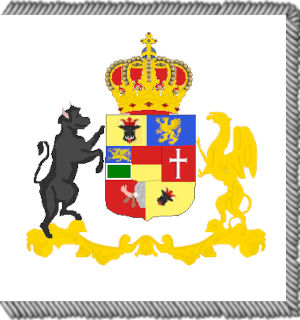 Volker Scholz for the initial version of this article and Boris Brink for additional info on the origin and uniform of the regiment.