In June or July of 1757 the Chamber President of Neumark, von Rothenburg, personally requested Berlin for permission to recruit a militia force for the defence of the province. On August 10 1757 permission was granted to raise the units, which were to come under supervision of Department 6 of the General Directory.

One squadron was raised in Cüstrin in August 1757, from the local peasantry. It comprised:

In November 1759, Maltitz was succeeded by Captain Georg Sigmund Schmidt, who had served as a sergeant in Markgraf Carl Infantry, then as a lieutenant in the Land-Battalion Nr. I von Heiderstädt. The squadron comprised 3 officers, 7 non-commissioned officers, a trumpeter and 100 hussars.

In July 1758, the squadron was stationed at Driesen on the Netze to defend against the Russians, along with Frei-Infanterie von Hordt, a detachment of the von Reusch Hussars (including 41 Bosniaks), and the Land-Battalion Nr. II de Rège. 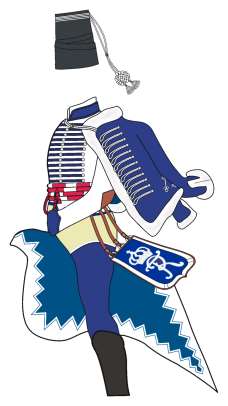 Dal Gavan and TheBaron for the initial version of this article