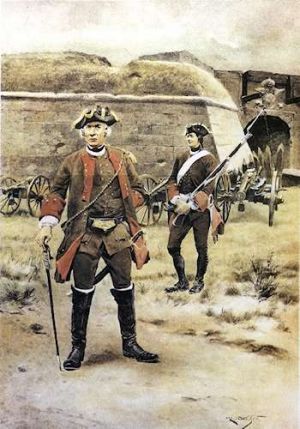 The present article deals with the Netherlander Feld-Artillerie Haupt-Corps which was a semi-autonomous body, commanded by a lieutenant-colonel. It had its own Ordnance Department and Horse Party. In peacetime, this unit was garrisoned in Malines.

By 1762, the Netherlands artillery contribution was 33 3-pounders, four 6-pounders and a 12-pounder.

During the Seven Years' War, the colonel-commander of this corps was:

At the outbreak of the Seven Years' War, the regiment counted 8 companies for a total of 768 men. Since 1748, it had been increased by about 600 men.

During the war, several companies were assigned to garrisons of fortresses of the Austrian Netherlands (corresponding roughly to present-day Belgium). However, some detachments were attached:

These various detachments were involved in several campaigns, battles and sieges who took place during this war. Throughout this conflict, the Austrian Field Artillery was generally considered as one of the best, if not the best.