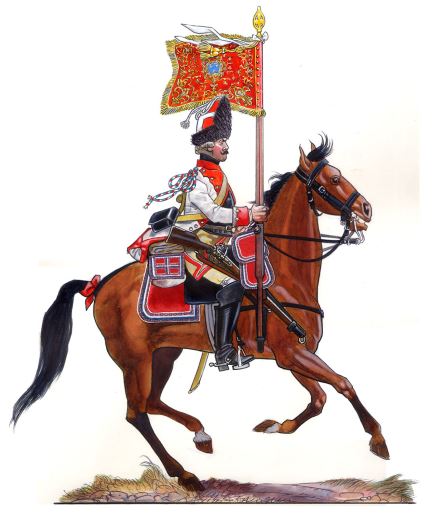 The regiment was raised in Piémont in 1630 and transferred into the French service on May 16 1635 under Commander de Souvre. On March 20 1647, Anne d'Autriche purchased the regiment for her second son, Philippe d'Anjou. On April 20 1660, at the death of Gaston d'Orléans, he took the name of Orléans and his regiment was renamed accordingly. The regiment was disbanded on April 18 1661 but raised anew on December 7 1665 for the Duc d'Orléans.

During the War of the Austrian Succession, the regiment took part in the campaigns in Bohemia from 1741 to 1743. In 1746, it was transferred to Flanders where it campaigned until 1748.

When the French Cavalry was reorganised on December 1 1761, the regiment was increased to 4 squadrons, each of them consisting of 4 companies of 40 troopers, for a total of 640 troopers. The 2 additional squadrons came from Crussol Cavalerie who was incorporated into Orléans Cavalerie.

As per a decree dated January 1 1791, the regiment became the “13e Régiment de Cavalerie”.

In 1756, at the outbreak of the war, the regiment was stationed at Mirecourt. It was then transferred to cantons between the Meuse and Alsace.

In 1757, the regiment left Sedan to join the army of Maréchal d'Estrées at Neuss for the planned invasion of Hanover. In July, it was at the Battle of Hastenbeck, then it took part in the conquest of Hanover. At the end of the year, it took its winter-quarters in Ostfriese, in the fourth line of the French Army.

At the end of May 1759, when the French army of the Rhine launched its offensive in West Germany, the regiment remained on the Rhine as part of the corps of the Marquis d'Armentières. On June 6 1759, the regiment was present at an engagement near Elberfeld. It was then detached to Münster. Afterwards, the regiment was probably transferred to Contades' Army since, on October 19, it was part of the force sent by Contades to reinforce d'Armentières on the Lower Rhine.

By February 9 1761, the regiment was attached to Broglie's Army and deployed in the area of Siegen. On July 16, it took part in the Battle of Vellinghausen where it was deployed in the second line of the cavalry right wing under the Prince de Croy. It took its winter-quarters at Baden-Durlach.

By the end of March 1762, the regiment was attached to the Prince de Condé's Army of the Lower Rhine. In mid-April 1762, the regiment marched to Gervesheim in the Duchy of Bergh. By May 29, it was posted at at Dülken, Campbruck (unidentified location) and Capellen (unidentified location) as part of Lévis's Reserve. From December 19, all French armies still operating in Germany abandoned their cantonments and marched to Butzbach, converging on Frankfurt. Germany had to be evacuated by December 31. The regiment was directed on Valenciennes.

In 1763, when peace was signed, the regiment, then at Valenciennes, finally incorporated Crussol Cavalerie which had been attached to the regiment during the reorganisation of the French cavalry at the end of December 1761. In summertime, the coat was often removed and folded on the porte-manteau. In such an outfit, French cavalrymen looked quite the same as Prussian cuirassiers.

Lienhart and Humbert show the following differences for the uniform of 1757:

N.B.: the regimental lace is represented by a simple blue braid (maybe an oversimplification of the quite complex livery of Orléans)

As per Beneton, in 1739 the uniform was red lined blue and laced with a braid at the livery of Orléans (2 rows of red and white checkerboard with 2 central stripes: one white, one blue)

The first four companies of the regiment carried standards. 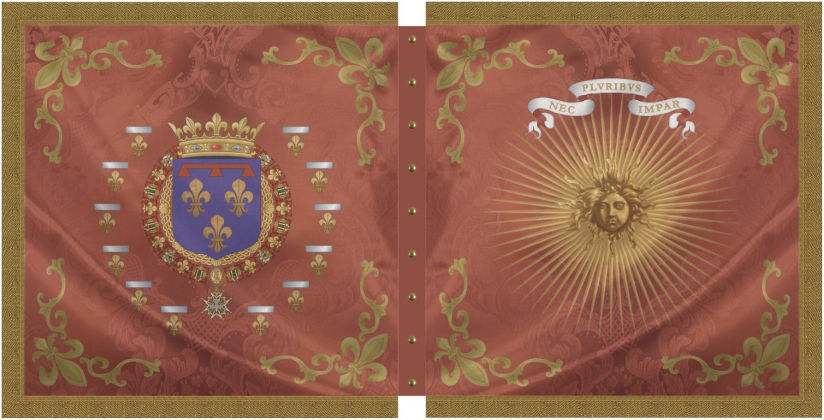