Difference between revisions of "Phull Cuirassiers"

The regiment was raised on May 10 1758 as the Kürassierregiment von Phull.

In March 1761, the regiment was transformed into a regiment of dragoons.

In 1760, the entire regiment took part in the campaign of Saxony against the Prussians.

Uniform of the Cuirassier Regiment (1758)

N.B.: in 1759 in his Etat des Trouppes de S.A.S. Monseigneur le Duc de Virtemberg et Theck sur pié en 1759, Jacques André Frederic mentions a white uniform with a grayish waistcoat and rose distinctives. However, the colours of the original have faded and it is difficult to establish the exact shades.

Troopers were armed with a sword, a musket and a blackened cuirass.

Uniform of the Dragoon Regiment (1761)

It seems we don't have any valuable information about the uniform of von Phull Dragoons regiment. The only thing we know is that this regiment was directly derivated from von Phull Cuirassiers regiment.

A uniformologic plate from von Stadlinger is showing the uniform of three cavalry regiments in 1758 and 1761: on the left, a cavalryman with a yellow coat and a cuirass in 1758 (von Phull Cuirassiers regiment), in the middle, a hussar in 1758 (Gorcy Hussars regiment) and on the right, a cavalryman with a white coat and without any cuirass in 1761. It seems that it was deduced that this cavalryman represented von Phull regiment, after its change from Cuirassiers to Dragoons. But, two other plates, one from Becher's Bilderhandschrift and one from Knötel (Sturm), are showing a cavalry man with a white coat, red lapels and cuffs: so, the same uniform than the uniform shown on the Stadlinger's plate. More than the fact that it seems the Knötel's plate was derivated from the Becher's plate, what is strange with these plates is the fact that they are showing a breastplate. Dragoons regiments didn't wear any breastplate, so these regiments could not show a Dragoon regiment. Moreover, we doubt a lot that von Phull regiment changed its coat color to become a Dragoons regiment (we think they became a Dragoons regiment just because of a lack of cuirasses). So, even if the Becher's plate was named "Ein Würtemb. Curassier von Phullche regiment", we strongly think this plate is not showing the von Phull Cuirassiers regiment but the Gens d'Armes zu Pferd regiment, raised in 1760.

We suppose von Phull Dragoons regiment had the same uniform than the von Phull Cuirassiesr regiment, the cuirass apart.

Regimental Standard in 1758 (Regimentsstandarte): red field fringed in gold with a golden finials and a natural wood flagpole 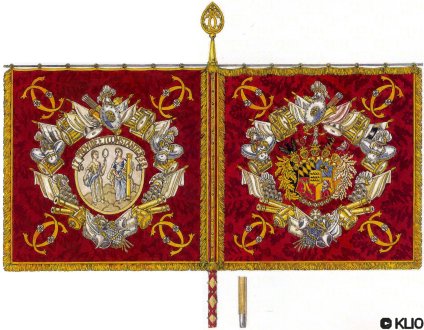