Some sources mention that, in 1762, the Portuguese army totaled some 40,000 men, including the British contingent of 7,000 men. However, in his memoirs, the count of Lippe-Bückeburg clearly says that; excluding the corps operating in the northern regions of Minho and Tras-os-Montes (5 rgts), and the garrisons of Elvas (2 rgts), Almeida (1 rgt) and Estremôz (1 rgt); his army counted only 14 to 15,000 men, including the British contingent. On September 20, the count of Lippe-Bückeburg decided to make each Portuguese battalion a distinct and autonomous unit.

For its part the cavalry initially counted 10 regiments, including the dragoons. On April 21, 4 new light cavalry regiments were raised. Finally, on June 26, an 11th line cavalry regiment was raised under the name of "Mecklenbourg."

Generalities about the uniform

Our list of Portuguese regiments takes into account the reorganisation made by the count of Lippe-Bückeburg on September 20 1762. However, several units are designated by different names, depending on the authors. Furthermore, to make matter more complicated, throughout the war, the terms regiment and battalion were often used interchangeably.

Organisation
Generalities about the colours 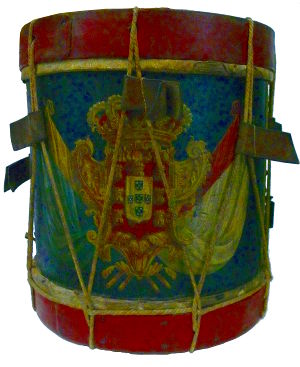 In 1762, at the beginning of military operations, the northern provinces and the province of Alentejo were requested to raise a few auxiliary companies or regiments of horse and foot. These units were disbanded at the end of the conflict.

N.B.: this list of auxiliary infantry units is not exhaustive, other similar units were raised during the 1762 campaign

A decree of April 21 1762 reorganised the light cavalry into 4 regiments (10 coys each, with 42 men, including officers, in each company). These 40 companies had previously been raised to reinforce the 10 existing cavalry regiments but the decree organised them into 4 autonomous regiments. However, these regiments were probably not formed soon enough to take active part in the campaign.

Voluntários Reais: raised in August 1762 with troops contributed by every infantry and cavalry regiments, to the exception of those garrisoning Almeida and Elvas. The regiment counted 800 men in 2 infantry terços and 1 cavalry terço under the command of colonel Hamilton. Their uniform was most probably dark brown with red as distinctive colour.

Manuel Ribeiro Rodrigues and Joseph O'Neill for the revision of the list of Portuguese units.