The regiment was primarily composed of 10 companies of 60 men each. By order of August 30, 1747, the 10th Company had been dissolved in other companies. Under the new structure, three companies each formed 1 squadron. Each company had 15 manned horses, so that at any time a marching Squadron could be put together in full numbers. In August 1759, the number of horses in the cavalry was increased from 135 to 150.

The successive regiment Inhaber were:

Garnison during the war: 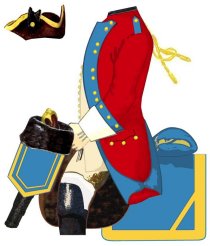 Officers uniform would perhaps have a mid blue collar. The lace on the tricorne was gold.

Kettle-drummers would have a field uniform which had inversed colors: mid blue coat and red distinctives..

About the colours of the Bavarian dragoons regiments , we know one model in use during the first part of the 18th century, before 1740; we know 2 models of flags which were in use between 1742 and 1745 and we also know one other model in use in 1771. So, between 1745 and 1771, information are unfortunately very scarce. The following descriptions represent an "educated guess" based on these few sources.

Bavarian dragoons carried 1 guidon colours per squadron. The first squadron of each regiment carried the Leibguidon while other squadrons carried one Ordinarguidon .

Please note that, as Ordinarguidon, the 1750's "Interims" pattern and, as Leibguidon, the 1735's "Early 18th century" pattern could have been carried.