A single battalion regiment was first raised 1704 by duke Johann George zu Sachsen-Weißenfels. In 1705, it was increased to 2 battalions by merging with the "Venediger" regiment (sic. – read Benediger). Till 1717, it served in Poland, Brabant and Pommerania.

During the War of the Polish Succession, the regiment initially served in Poland in 1734, then on the Rhine in 1735 and finally in Hungary from 1737 to 1739.

In 1756 the regiment became prisoner at Pirna and turned over into Prussian service as Generalmajor Graf von Flemming's regiment.

In 1757, the regiment reformed with 1 battalion in Hungary and fought with the French armies till 1763. After the peace settlement of Hubertusburg, it reformed in 3 bataillons in 14 coys. In 1778, it was reduced to 2 battalions in 10 coys.

In 1757, the regiment was reformed in 1 bataillon with 4 coys plus 1 coy unmounted Gardeducorps serving as grenadiers.

At the end of August 1756, when Frederick II proceeded to the invasion of Saxony, the regiment retired to Pirna with the rest of the Saxon army. At Pirna, the regiment was deployed on the right wing under von Rochow, as part of von Bolberitz's Brigade. The Prussians blockaded the Saxon army in Pirna from September 9 until October 15 when the Saxons finally had to surrender. The regiment was then forcefully incorporated into the Prussian army as Flemming Fusiliers.

In 1757, 500 men of the former Prinz Clemens absconded from the Prussian service. They marched through Poland to finally reach Hungary where the regiment was reestablished. It now consisted of a single battalion. This new regiment was included into the Saxon Auxiliary Contingent serving with the French Army.

In 1758, to avoid further contact with the Prussians, the contingent marched through southern Germany and had, by July, assembled in Strasbourg. On September 3 1758, the regiment was part of the Saxon contingent, under the command of prince Xaver, who encamped at Castrop, 15 km from Recklinghausen, on his way to make a junction with the French army of the Marquis de Contades in Westphalia. The contingent made a junction with Contades' army around mid September. As part of Chevert's and Fitzjames' divisions, it reinforced the army of the Prince de Soubise in Hesse. On October 10, the contingent first saw action at the battle of Lutterberg where its determined attacks decided the day for the French army. On October 20, 10 days after their victorious action at the battle of Lutterberg, the Saxon regiments rejoined Contades at Werl. 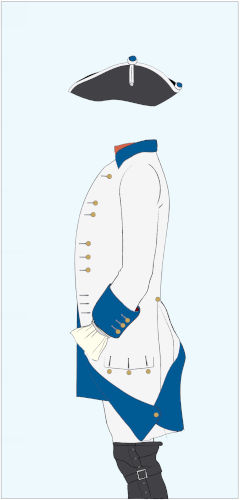 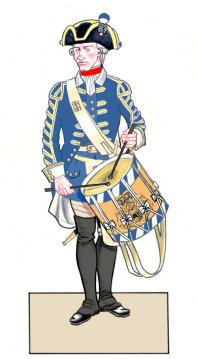 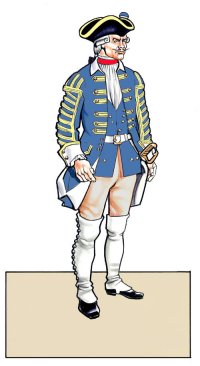 Leibfahne: white field. In the centre an ermine mantel backed light blue, crowned with a royal gold crown. On the mantelgold, four shields wearing the Polish arms (white eagle on a red field), the arms of Lithuania (white knight riding a horse on a red field), the royal "AR" in gold on a light blue field, , the arms of Saxony (two crossed crimson swords on a field of black over white and a lime green crown on a black and yellow stripe field). A very richly designed border in the distinctive color (blue = French blue) with a yellow (buttons color) piping.

Ordinarfahne: blue (French blue) field. In the centre, the golden royal cipher "AR" on a white pedestal surmounted by a royal crown and surrounded by green palm leaves. A very richly designed border in yellow (buttons color) with a white piping.