The regiment was raised in 1701 by count Beuchling. In 1705/06, it was augmented by incorporating a battalion of French and another of the Dresden garrison. Till 1717 it participated in the campaigns in Poland, Brabant and Pommerania.

During the War of the Polish Succession, the regiment served in Poland in 1734 and 1735.

In 1756, the regiment became prisoner at Pirna and turned over into Prussian service as major-general von Loen's regiment. The regiment soon deserted and marched to Poland. It then joined the Saxon army assembling in Hungary and entered into the French service till 1763.

After the treaty of Hubertusburg, the regiment reformed in 3 battalions or 14 coys. In 1778, it was reduced to 2 battalions in 10 coys.

In 1756, the État mentions 2 battalions with 10 coys of musketeers and 2 coys of grenadiers. Each musketeer coy counted 95 men, grenadier coy 97 men, regimental staff amounted to 17 men. The regiment totaled some 1,160 men.

In 1757, the reformed regiment consisted of 2 battalions with 8 coys plus 1 coy grenadiers.

At the end of August 1756, when Frederick II proceeded to the invasion of Saxony, the regiment retired to Pirna with the rest of the Saxon army. At Pirna, the regiment was deployed on the left wing under von Harthausen, as part of von Gersdorf's Brigade. The Prussians blockaded the Saxon army in Pirna from September 9 until October 15 when the Saxons finally had to surrender. The regiment was then forcefully incorporated into the Prussian Army as Loen Fusiliers.

In 1757, the entire regiment absconded from the Prussian service. Led by sergeant Seher, the 1st battalion left the camp of Lübben on March 28, the 2nd battalion, commanded by sergeant Richter of the Königin regiment, departed from Guben on March 29. Both directed their escape to Meiseritz in Poland. Arriving there, both sergeants were instantly promoted to the rank of captain. The regiment marched to Hungary to join the other Saxon troops gathering there. Since these days, it beats the Grenadiermarsch. The newly reformed regiment was then incorporated into the Saxon Auxiliary Contingent. 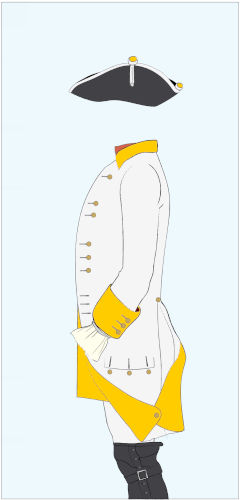 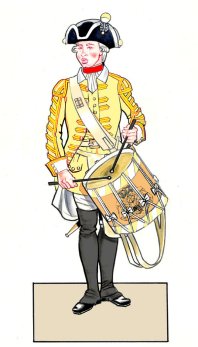 Leibfahne: white field wearing the Saxon-Polish coat of arms surrounded by rich gold and red embroideries with a yellow border.

Ordinarfahne: yellow field with rich gold and red embroideries wearing a gold AR cipher on a stone pedestal surrounded by a green wreath and surmounted by a red and gold crown.