This article is dedicated to the description of the Prussian dragoons colours and of the terminology used to describe them (see also Terminology used for flags).

All of Dal Gavan’s plates illustrating Prussian dragoon standards in our various articles are based on photographs of the two surviving flags held by the Heeresgeschichtliches Museum in Vienna, with the exception of the crowns, which are taken from the Redlin’s flag plates (the crowns in the photos were extremely hard to reproduce, and that on the model 1713 flag had clearly been damaged and repaired – not very well).

The main part of the flag is called the field. This refers to the cloth that would be seen if all the designs on the flag were removed. These designs themselves are called various names, but the main ones were the centre device and corner monograms. Some flags also carried secondary designs such as corner wedges (Eckkeile) and corner flames (Eckflammen). In the dragoon regiments these Eckkeile and Eckflammen were the same colour on both the Leibstandarte and Eskadronsstandarte, only the colours of the field, centre and scrolls (and sometimes the eagle) changed between a regiment's Leibstandarte and Eskadronsstandarte. 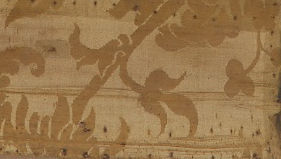 The flags were usually made from heavily brocaded silk damask, though some regiments had light embroidery (eg surviving FWR pattern flag of DR Nr 1 in Vienna) and some may have had plain silk. The silk was sewn to a heavy linen centre cloth, to both support the embroidered designs and to make the flag opaque. The designs were embroidered onto the flag, not painted, and were extremely expensive and time consuming to make. The top, bottom and "fly" edges of the flags were heavily fringed.

The dragoon flags were cut in a guidon style, were 50cm on the lance and the flags extended 65cm to the points of the tail. The flag measured 50cm to the centre of the cut out part.

As a general rule the flags were coloured in a specific way. The Leibstandarte had a white field, a coloured centre and a white scroll while Eskadronsstandarte had a coloured field, white (early FWR) or silver (later FWR and FR) centre and a coloured scroll. For flags with a black centre (DR Nr 5, DR Nr 7 and DR Nr 8) the eagle was done in gold thread, on all others in black. The eagle's crown, beak, legs and talons were gold. The lightning and hilt of the sword carried by the FR eagle were gold, while the sword blade was silver. The eagles eyes on both types of flag were white.

When Frederick II ascended the Prussian throne in 1740, the cost of these flags meant that there was no complete new issue of flags for for cavalry (kuerassiere and dragoons) as there had been with the infantry. The dragoon flags were generally only replaced when they were captured or destroyed through battle and hard use. New regiments, either formed by the splitting of existing regiments or by taking regiments into Prussian service, are dealt with below.

All the dragoon regiments lost flags between 1740 and 1763, with the exception of the von Oertzen Dragoons (Nr 4), who did not lose a colour after Frederick II split them away from the Grenadiere zu Pferde in 1741. So the Dragoon Regiments Nr 1 to Nr 8 all carried a mix of FRW and FR patterns.

DR Nr 8 was raised from DR Nr 7, a ten squadron regiment, in 1744. Five new squadrons had been raised just before the regiment was split and all issued with FR pattern Eskadronsstandarte, while it is believed that the original squadrons all carried FWR pattern flags. DR Nr 7 kept the odd-numbered squadrons (1 or Leibeskadron, 3, 5, 7 and 9) and DR Nr 8 got the even-numbered squadrons (2, 4, 6, 8 and 10), so each regiment had a mix of patterns, with DR Nr 7 having an FWR Leibstandarte. DR Nr 8's new Leibeskadron, formerly the 2nd Squadron of DR Nr 7, received a new, FR Pattern 'Leibstandarte.

When DR Nr 9 and DR Nr 10 were raised from the excess squadrons of DR Nr 1 in 1743, the new regiments received a completely new issue of FR Pattern flags, including new Leibstandarten. DR Nr 11 and DR Nr 12 also received complete new issues when they joined the Prussian army in the 1740's.

The staff used for cavalry flags is called a lance. In the Prussian Army (and most European armies), the lance was made to resemble the tournament lances used in jousting. The flags were wrapped around the lance, just below the finial, and nailed to the lance with gold- or silver-plated nails. Also the bodies of the lances were decorated with small gold or silver flaming grenades (matching the metal colour used on the flags, though some sources say the grenades and lance head were always gold) that were painted on to the lance. Columns of these grenades extended from above the hand grip, which was ribbed to assist in gripping the lance, to just below the flag lower edge. There were also a steel slider bar and ring attached to the lance, that allowed the bandolier or standard belt (a belt worn by the standard bearer to help hold the lance) to be clipped to the lance. In dragoon regiments the lance was originally coloured to match the field of the flag, so the Leibstandarte was nailed to a white lance, while the lances of the Eskadronsstandarte would be coloured to match the field. However the lances of the Regiments von Plettenberg (Nr 7) and von Langerman (Nr 8) at some stage were painted blue (sources disagree on whether this was a pale blue or a cornflower blue). This possibly occurred after the death of Frederick II, in which case they would have followed the convention of white lances (Leibstandarte) and coloured lances to match the Regimentsstandarten field (in these cases, black) during the Seven Years’ War.

Many modern sources show the Truchseß Graf zu Waldenburg Dragoons (Nr 3) as having been issued a new set of flags that were coloured white with rose centre (Leibstandarte), rose with white centre (Eskadronsstandarte) and with silver embroidery. Fiebig mentions them in his work on Prussian flags, Unsterebliche Treue (page 114) and implies they were issued in 1741. The original source for these flags is the Darmstädter Fahnenbuch of 1747, which was compiled from 1742. (The pink flags, however, were to be issued to DR Nr 5, to replace their black flags, not to Dr Nr 3.) This book showed proposed designs for flags, which were to be issued after the Silesian Wars, and which in the cavalry would match the flags to unit facing colours. However, only a few of these flags are known to have been made and issued in time for use during the Seven Years' War, e.g. those for cuirassier regiments KR Nr 2 and KR Nr 5. What's more, replacement flags for those lost or destroyed in battle conformed to the colours of the flags already carried by the regiments- so DR Nr 5 got new, black flags, not the pink flags shown in the Darmstädter Fahnenbuch. The pink flags were not carried during the Seven Years' War, an order for a replacement Eskadronsstandarte in 1758 specifying a white field, silver centre and gold embroidery, but may have been issued later.

The monogram on the eagle's breast

The two surviving FR pattern dragoon flags both show a crowned FR monogram worked on the eagle's breast in gold thread. Both date from pre-1760, being captured at Maxen (a Eskadronsstandarte of DR Nr 11, held at the Heeres Geschichtliches Museum in Vienna) and at Paltzig (a Eskadronsstandarte of DR Nr 6, held in the Military-Historical Museum of Artillery, Engineering and Communications Forces in St Petersburg), both in 1759. The monograms on the two flags are similar enough to look as if they have been made to a standard pattern.

However, the monograms do not appear in the plates for either the Cuirassier or Dragoon flag plates from the Dessauer Bilder Handschrift of 1742. Nor is the monogram embroidered on the breast of the eagle on a contemporary Kürassiere Leibstandarte, presented to the Prinz von Schönaich-Carolath Kürassiere (KR Nr 9 in the 1806 numbering) in late 1758 or early 1759, after they lost a flag at Holitz in 1758. That flag was captured at Maxen in 1759 and therefore was "brand new". Whether the monograms were 1759-addition by regiments, were only used by some regiments, or were only used by dragoon regiments, is unknown. We have included samples of both types of eagle, with and without monograms, on this site.