This regiment is older than what its rank indicated. He had initially been raised in 1661 by Charles II under the title of “Royal-Irlandais” from the remnants of the Irish units in the French service which had been disbanded after the Treaty of the Pyrenees. This regiment returned to Great Britain when Charles II was recalled.

The regiment was soon renamed “Gardes Irlandaises” defended the crown of James II up to the last moment. After the capitulation of Limerick, the regiment entered into the French service and, on October 9, 1689, embarked for Brest.

For many years, Louis XIV, for the sake of James II, maintained the regiment out of the French Army, as an auxiliary unit which initially served on the coasts of Normandie.

In 1692, during the Nine Years' War (1688–97), the regiment received James' authorisation to join a French army campaigning in the Low Countries and took part in the siege of Huy. In 1693, it fought in the Battle of Landen. It later took part in the capture of Charleroi.

On February 27, 1698, after the signature of the Treaty of Ryswick, the “Gardes Irlandaises” were disbanded and their officers and soldiers joined the same day a new regiment of fifteen companies which took the name of its colonel, Lord Dorrington.

In 1719, during the War of the Quadruple Alliance (1718-20), the regiment campaigned on the frontier with Spain, taking part in the submission of Fuenterrabía and San Sebastian and in the blockade of Roses.

In 1754, the regiment took part in the training camp of Aimeries on the Sambre.

During the Seven Years' War, the regiment ranked 98th and was under the command of:

In 1756, the regiment was stationed at Calais.

By August 1 1757, the regiment was garrisoning Dunkerque in Flanders. It continued to serve on the frontiers of Flanders until 1760.

In 1760, the regiment joined the French armies operating in Germany. By May 23, the regiment was part of the first line of the infantry centre of Broglie's Army. By December 30, the regiment had taken its winter-quarters in Giessen.

In 1761, the regiment took part in the defence of Marburg. On July 16, it was at the Battle of Vellinghausen.

In 1762, the regiment was stationed at Cambrai. By the end of the year, it was at Valenciennes.

In 1763, the regiment was transferred from Valenciennes to Berghes. 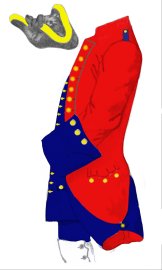 Drummers wore the livery of the king of England.

Colonel colour: white field with a white cross; centre device consisting of the initials “JR” surmounted by a golden crown.

Ordonnance colours: white field with a red cross; centre device consisting of a golden crown of England surmounted by a golden lion.