The regiment was raised late in 1759 with British subsidies. It initially counted many Hungarian troopers and consisted of 4 coys (114 men each) and a staff of 17 for a total of 473 men.

For the 1761 campaign, the regiment was augmented to 6 coys, totalling about 747 men.

The regiment participated extensively in the Kleinkrieg.

On May 24 1760, the regiment, attached to Luckner's Corps, took part in an attack on a French detachment under the command of Waldner occupying Butzbach. A party of the French Bercheny Hussards sent to reconnoitre the Allied positions was pursued by Allied hussars who entered into Butzbach on their trail. Waldner retired through another gate with the garrison and entered into the woods in the direction of Friedberg. The Allied hussars engaged a picquet of Caraman Dragons and captured 1 officer and 20 troopers. They then engaged a picquet of infantry and captured 25 men. Luckner then divided his force into 2 parties: the mounted jägers entered into the woods while the Roth Hussars pursued the retreating French units up to Friedberg, bringing back prisoners and 30 carriages. In this action Luckner lost 2 hussars killed and 5 wounded. He also destroyed a French magazine. 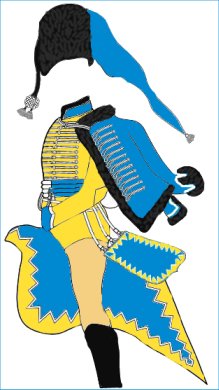 Troopers were armed with a sabre, a carbine and a pistols.

Officers wore uniforms similar to those of the troopers but with silver laces and braids.

NCOs wore uniforms similar to those of the troopers with silver lace on collar and cuffs.