The unit was created as a free corps as per the regulation of November 10 1756 for Guillaume Henri, Prince of Nassau-Saarbruck. It was initially named Volontaires de Nassau-Saarbruck. The unit then consisted of 2 squadrons. Each squadron consisting of 2 companies of 75 men each.

On April 7 1758, the unit was renamed Volontaires Royaux de Nassau. On June 14 of the same year, the unit became the Royal Nassau Regiment and was incorporated into the regular German light cavalry. It counted 600 men divided up into 4 squadrons of 150 troopers (the standard organisation for a hussar regiment). However this regiment was the only hussar regiment to have the prévôté privilege, adding 1 provost to its staff.

Somewhere between August 23 and September 6, 1757, the regiment joined the Army of Saxony, led by the Prince de Soubise, in the area of Erfurt and Eisenach. The regiment was considered of poor quality. At the end of the year, it took its winter-quarters in Stockstadt and Grossostheim in Hessen.

By April 26, 1759, the regiment was part of the Duc de Broglie's Corps. In June, at the beginning of the French offensive in Western Germany, the regiment was part of the “Right Reserve” under the command of the Duc de Broglie who had taken position at Friedberg in Hesse. On the evening of July 8, it accompanied Broglie in his raid on Minden. On the morning of July 9, the regiment discovered a float of timber which Broglie immediately used to pass the Weser at the head of 300 light troops. On August 1, the regiment took part in the Battle of Minden where it was attached to Broglie's Corps. By August 31, the regiment was attached to Broglie's reserve posted at Holzhausen. On September 22, the equipage and sick of the regiment were captured at Usingen by Luckner's Corps. On September 27, a party of the regiment was attacked by surprise by an Allied detachment (200 foot and 200 horse) at Neukirchen on the Solms River. On November 19, Broglie sent the regiment onto the Kinzig to support the manoeuvre of the Württemberger contingent. On November 29, a detachment of the regiment was driven back by the vanguard of the corps of the Hereditary Prince who was marching on Fulda to attack the Württemberger contingent. On Friday November 30, the Allied force under the Hereditary Prince launched a surprise attack on Fulda but the hussar regiment did not intervene in the affair.

By May 23, 1760, the regiment was part of the centre vanguard of Broglie's Army. On June 24, the regiment harassed the Allied garrison who had evacuated Homberg and captured prisoners and several wagons. On August 8, an Allied detachment under Luckner attacked Einbeck, forcing the Volontaires d'Austrasie to retire to Harste where they were soon joined by a dragoon rgt and the Royal-Nassau Hussards. By September 17, the regiment acted as a detachment to protect forage activities. M. de Stainville left Dingelstädt with the Volontaires de Schomberg, Bercheny Hussards and Royal-Nassau Hussards and marched towards Halberstadt. From October 15 to 24, Stainville scoured the Hanoverian countryside before returning to Heiligenstadt (present-day Heilbad Heiligenstadt). On November 12, a detachment of the regiment under the command of M. de Schwartz was attacked by Luckner. Being outnumbered, the detachment retired on a detachment of Orléans Dragons led by M. de Pons. The two French detachments were then able to retire on Stainville's Corps at Duderstadt without being pursued. By December 30, the regiment had taken its winter-quarters in Siegen and surroundings.

On February 15, 1761, the unit was posted at Eisenach during the Combat of Langensalza. On March 18, during the French counter-offensive in Hesse, Wurmser, with the Royal-Nassau Hussards and a detachment of dragoons and infantry, reached Fronhausen where he drove Allied patrols back to Niederweimar. The Royal-Nassau Hussards and part of Turpin Hussards then harassed Scheiter’s and Wangenheim’s detachment during their retreat. At 8:00 PM, the 2 Allied battalions occupying Marburg evacuated the town. On March 26 at daybreak, a few Allied troops were guarding a bridge over the Schwalm at Dittershausen. When the Hereditary Prince started to evacuate his outposts, M. de Poyannes sent against them about 100 men of Royal-Nassau Hussards, led by M. Schwartz and supported by dragoons and the Volontaires de Saint-Victor. This force broke the Allied hussars and reached the infantry, capturing 4 guns, a British aide-de-camp of the Hereditary Prince, Lieutenant-Colonel Jeanneret of the Malachowski Hussars, along with other prisoners. M. de la Borie, major of the Volontaires de Saint-Victor, closely followed the retiring Allied forces but the arrival of Allied cavalry forced him to retire. The Volontaires brought back only 1 of the 4 captured guns. By April 15, the Royal-Nassau Hussards were attached to Broglie’s Upper Rhine Army and posted in the region of at Limburg, Weilburg, Alzey and Karlstadt am Main.

On September 2, 1761, during the French campaign in Western Germany, Belzunce marched on Osterode where an Allied detachment under Freytag had taken position while Prince Xavier advanced against Luckner at Seesen. Belzunce first took position between Einbeck and Seesen. He then advanced on Osterode, attacked Freytag at 7:00 a.m. and defeated him, taking 17 officers and 450 men prisoners. Only Du Roi (Cavalerie or Dragons?), La Ferronnaye Dragons and Royal-Nassau Hussards had time to directly took part in the combat. Belzunce pursued the Allies beyond Zellerfeld and then took position at Clausthal, the main town of the Harz mining district, seizing large quantity of silver.

In 1762, the unit served with Soubise's Army of the Upper Rhine, during the French campaign in Western Germany. On June 4, 1762, the Volontaires de Saint-Victor and the Chasseurs de Monet, supported by the Volontaires Royaux de Nassau and the Volontaires de Soubise, drove Freytag from the height of Gerbenstein, following him beyond the heights of Liebenau. On June 20, M. de Clausen advanced to Wilhelmsthal with 8 bns, 4 dragoon rgts, the Volontaires Royaux de Nassau, the Volontaires de Soubise and the Volontaires de l'armée. By July 12, the unit was posted on the Schwalm under M. de Rochambeau. On June 24, the unit was present at the Battle of Wilhelmsthal where it formed part of the right vanguard under the command of M. de Castries. On September 9, as the French army was trying to relieve Cassel, the Volontaires Royaux de Nassau, the Volontaires de Soubise and the Volontaires de Verteuil attacked the Allied detachment escorting the pontoon train. They pursued it up to Laubach and captured the pontoons as well as a large number of ammunition wagons and several prisoners. After breaking up the pontoons, the French light troops retired. On September 16, the vanguard under M. de Saint-Victor (Volontaires de Soubise, Volontaires Royaux de Nassau with some cavalry and dragoons) passed the Ohm at the extremity of the Allied left wing and advanced on Alsfeld where it caught up with the Allied baggage and bakery retiring towards Neustadt. This vanguard made itself master of the Allied convoy, inflicting much damage, capturing several horses and hamstringing the rest. However, Freytag Jägers supported by some cavalry had immediately been sent in search for the French light troops, arriving just in time to save the train of bread wagons and forcing the French light troops to retire to the Ohm and to repass the river. Saint-Victor then recrossed the Ohm at Nieder-Ofleiden, between Schweinsberg and Homberg, pushing forward as far as Niederklein where he surprised the British mobile hospital which had not yet completed its evacuation. Saint-Victor captured several prisoners and horses. Granby's Corps soon forced this French detachment to retire on Ziegenhain. On November 20, Louis XV issued his instructions regarding the French armies serving in Germany, specifying which units should return to France right away and which should stay in Germany till the final evacuation. The present unit among those which remained in Germany. 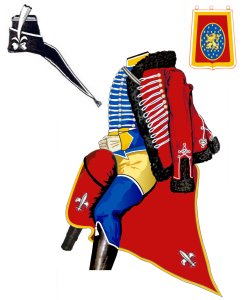