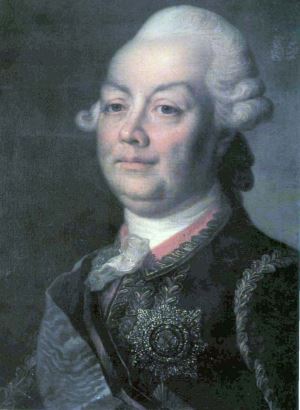 One of the foremost Russian generals of the XVIIIth century.

Pyotr Alexandrovich was the only son of Count Alexander Rumyantsev and of Maria, the daughter and heiress of Count Andrey Matveyev. As his mother spent much time in the company of Tsar Peter I, rumours suggested that the young Rumyantsev was the monarch's illegitimate son. In fact the Tsar was his godfather. Pyotr Alexandrovich was the brother of Praskovja Bruce, a future confidant of Empress Catherine II.

Pyotr Alexandrovich was still a child when he entered military service in the Preobrazenskiy Leib-Guard.

In 1739, Pyotr Alexandrovich was designated for a diplomatic career and sent to Berlin as member of the Russian diplomatic corps.

In 1740, Pyotr Alexandrovich was recalled to Russia, his behavior in Berlin being unsatisfactory, and sent to a home for young members of the gentry. However, he spent only two months there before, upon Field-Marshal Münnich's recommendation, being enlisted in the army as second- lieutenant.

Pyotr Alexandrovich first saw active service under his nominal father in the war with Sweden (1741-1743), distinguishing himself at the siege of Helsingborg.

In 1743, Pyotr Alexandrovich was promoted to captain. He personally carried to Empress Elizabeth Petrovna the Peace Treaty of Abo, concluded by his father. Thereupon he was promoted to colonel and commander of Voronejskiy Infantry. Moreover, he and his father received the title of count. The same year, he married Duchess E. M. Golicyn.

In 1748, Pyotr Alexandrovich took part in the march of a Russian Corps towards the Rhine.

For the campaign of 1757 in East Prussia, Major-General Rumyantsev commanded a column of the Russian Army. By mid June his column made a junction with Apraksin's column on on the right bank of the Viliya River opposite Kovno. These columns were gradually ferried to Kovno by two boats. On August 30, Rumyantsev took part in the Battle of Gross-Jägersdorf where he commanded a brigade held in reserve. Towards the end of the battle, when Rumyantsev's reserve appeared on the field, the Prussian infantry were brought to a stand and at length began gradually to retire.

In January 1758, the Russian Army proceeded to the invasion of East Prussia. On January 16, Rumyantsev's detachment was ordered to seize Tilsit (present-day Sovetsk) with another detachment. On January 31, being informed that Prussian troops were in the area of Elbing (present-day Elbląg), Rumyantsev sent 400 hussars to cut off the Prussian detachment and to take possession of the country. By mid-February, the entire Russian Army was organised into divisions, Lieutenant-General Rumyantsev seconding General Braun, commander of the 1st Division. On February 22, Rumyantsev left his cantonments and marched towards Elbing and the Vistula. On February 23, Resanov replaced Rumyantsev in the 1st Division, the latter receiving a new assignment. On June 9, Rumyantsev crossed the Vistula with a strong cavalry corps and encamped at Neuenburg (present-day Nowe). On June 29, he reported that one of his detachment had captured the Castle of Draheim and taken 20 men prisoners. At the beginning of July, when the Russian Army proceeded to the invasion of Brandenburg, Rumyantsev initially remained at Schneidemuhl (present-day Pila) with his corps. On July 3, he crossed the Wartha at Wronke (present-day Wronki). On July 20, Lieutenant-General Rumyantsev was instructed to supply the garrison of Driesen from the magazine at Wronke. On July 23, he was ordered to detach all his hussars to Schwerin (present-day Skwierzyna) and to reconnoitre towards Meseritz and along the frontier of Brandenburg. By the end of July, the entire cavalry had been detached under Rumyantsev, it marched to the village of Dragomarg (unidentified location) and encamped parallel to Fermor's Army. On August 3, Rumyantsev detached a party of light troops towards Koslin (present-day Koszalin) to reconnoitre the garrison of the Fortress of Colberg (present-day Kołobrzeg). On August 6, Rumyantsev's cavalry corps arrived in the camp of Königswalde. On August 8, he sent out 3 small detachments to Drossen, Sternberg and Sonnenburg to reconnoitre Prussian positions. On August 10, Rumyantsev's Cavalry marched from Königswalde through Alt Sorge to Landsberg. On August 13, he was ordered from Landsberg through Soldin to Stargard with his cavalry. By August 25, Rumyantsev was at the head of an important Russian cavalry corps (12,000 men) encamped at Schwedt. His corps was not present at the inconclusive Battle of Zorndorf. On September 11, Rumyantsev's Corps made a junction with the Russian Main Army at Landsberg and encamped on the left bank of the Wartha. On September 30, the Russian Main Army marched to Stargard, leaving Rumyantsev's Corps at Passkrug. After retiring towards Poland, Rumyantsev's Corps took its winter-quarters around Culm (present-day Chelmno).

In 1759, the Russians launched another campaign in Brandenburg. On August 12, Rumyantsev took part in the bloody Battle of Kunersdorf where he commanded the 3rd Division deployed in the centre.

On September 11 1760, after endless prevarications about various joint plans of operation, Fermor finally made his mind for the plan proposed by Montalembert, the French ambassador, calling for a concentration at Frankfurt-an-der-Oder and then a rapid advance on Berlin with a strong corps. Accordingly, the Russian Army left Herrnstadt and marched to Guhrau (present-day Góra Śląska). A force of 20,000 Russians under Tchernichev with Tottleben as second in command was assigned to this task. The Russian plan for the attack on Berlin called for Tottleben's cossacks corps, reinforced with 2,000 grenadiers, 2 horse grenadier rgts and all light troops; to march with all speed by Guben (present-day Gubin) and Beeskow. Meanwhile, the Russian vanguard under Tchernichev would take position on the Spree to support Tottleben. A third part of the Russian Army would take post at Guben while Rumyantsev would remain in observation at Crossen (present-day Krosno Odrzańskie) on the right bank of the Oder.

In 1761, Rumyantsev assumed command of a Russian army for the campaign in Pomerania. The plan called for this army, after having been resupplied from the sea, to set off from Marienwerder (present-day Kwidzyn) and to march towards Konitz with the Fortress of Colberg as its main objective. On June 1, Rumyantsev arrived at Konitz; on June 8, at Rummelsburg; on June 14, at Körlin. His army then made a junction with Jeropkin's Brigade (Arkhangelogorodskiy Dragoons and Tobolskiy Dragoons) and a company of ingenieurs. On June 16, Rumyantsev encamped near Pollnow (present-day Polanów). On June 22, he reached Gollenberg (now part of Koszalin) and Köslin. On June 26, he received reinforcements who brought his force to a total of 10,000 men. On July 5, he received additional reinforcements from Posen. At the end of July, a Russian fleet appeared in front of Rügenwalde where it disembarked siege equipment, war materials, supplies and troops. On August 12, these fresh troops made a junction with Rumyantsev's Corps. Rumyantsev was now at the head of more than 27,000 men. On August 18, Rumyantsev set off in two columns for Massow (present-day Maszewo) and Nosówko. On August 19, he took possession of Körlin, Belgard and the outposts on the Persante River. Werner retired towards Colberg. On August 22, Rumyantsev installed his main posts at Quetzin and Degow. He was now within sight of Colberg, only 12 km west of him. From August 24, Rumyantsev's Army undertook the Siege of Colberg. In the night of September 17 to 18, Rumyantsev attacked the entrenchment erected on the beach and the Grüne Schantze (Green Redoubt) works, capturing the entrenchment on the beach. In the night of September 18 to 19, Rumyantsev renewed his attack on the Grüne Schantze and the Sternschantz. The Russians initially captured the Grüne Schantze but were driven back by Thadden's counter-attack at the head of 5 bns. On October 22, Rumyantsev launched an attack on the Prussian entrenched camp at Prettmin. After resisting an entire day, the Prussians retired under the cover of night and the Russians immediately took possession of the camp. From October 23 to 25, Rumyantsev laid siege to Treptow, capturing the place and taking 1,800 men prisoners. In mid-November, part of the defenders of Colberg managed to escape. On December 1, Rumyantsev momentarily interrupted the bombardment and sent a letter to offer to the Prussian garrison to capitulate. Upon the refusal of his offer, bombardments resumed. On December 16, the isolated Prussian garrison of Colberg surrendered. Rumyantsev took 2,929 men prisoners ; captured 146 guns, 50,000 rounds of ammunition, 30,000 cannonballs, 3,000 bomb, 28 standards and colours; and freed 236 Russian prisoners.

In 1764, when the Cossack Hetmanate was abolished, Catherine II appointed Rumyantsev governor of Little Russia (present-day Ukraine), a function that he retained for 32 years (until 1796).

At the outbreak of the First Russo-Turkish War in 1768, Rumyantsev took command of the army sent to capture Azov. On July 7, he won the Battle of Larga. On August 1, he defeated the Turks again in the Battle of Kagul. He then crossed the Danube and advanced into Romania. For these dazzling victories, Rumyantsev was promoted to Field-Marshal and receive the honorary title of Zadunaisky (meaning "Trans-Danubian").

In 1774, as Rumyantsev's Army approached Shumla, the new Sultan Abdul Hamid I sued for peace. On July 21, the Treaty of Kuchuk-Kainarji (present-day Kaynardzha in Bulgaria) put an end to the war. By this treaty, Russia returned Wallachia and Moldavia to the Ottoman Empire, but was given the right to protect Christians in the Ottoman Empire and to intervene in Wallachia and Moldavia in case of Ottoman misrule. The Crimea was declared independent of the Ottoman Empire. Russia gained Kabardia in the Caucasus, unlimited sovereignty over the port of Azov, the ports of Kerch and Enikale in the Kerch peninsula in the Crimea, and part of the Yedisan region between the Bug and Dnieper rivers at the mouth of the Dnieper.

At the beginning of the Second Russo-Turkish War in 1787, Field-Marshal Rumyantsev commanded an army. In 1789, he captured Iași and Khotyn. However, suspecting Potemkin of deliberately curtailing supplies of his army, Rumyantsev resigned his command.

In 1794, Rumyantsev was sent to Poland to quench the Kościuszko Uprising. However, effective command was assumed by his rival Count Aleksander Vasilievitch Suvorov. In fact, Rumyantsev remained in his estates of Tashan in Little Russia.

Rumyantsev died on December 19 1796 at his estates of Tashan in Ukraine.

N.B.: All paragraphs depicting Rumyantsev's actions during the Seven Years' War are directly derived from our articles depicting the various campaigns, battles and sieges.